Video: Microsoft Surface 2.0 coming to a RBC near you 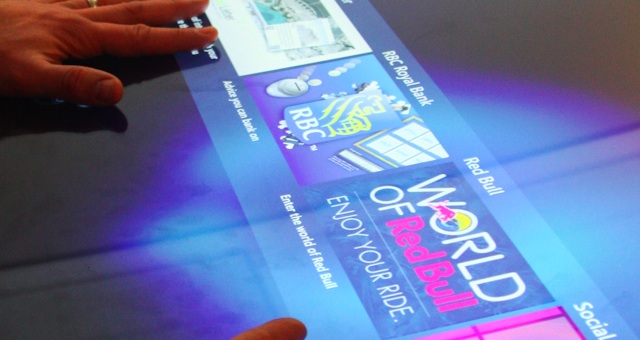 Microsoft and Samsung unveiled the next generation of the Microsoft Surface at CES this week. In Canada both Wind Mobile and Videotron use this technology to give their customers a great experience. They give the ability to check rate plans, device features and also compare devices against each other. This new version is called the SUR40 incorporates the new “PixelSense” technology that has 50 simultaneous touch points and somehow recognizes anything you put on the display such as your hands, fingers and paper with written words. Specs have it with a 40-inch HD 1080p screen (1920×1080 resolution), AMD Athlon II X2 Dual-Core Processor.

At a cost of $7,600 (USD) there has yet to be a Canadian wireless company to bring this on but RBC said they will have these in their branches (Some branches already do). According to the press release the Surface 2.0 will be in retail locations across Canada and offer a “unique and interactive way to engage clients to explore the ways RBC can help them and increase their financial literacy”. CrunchGear captured a 20-minute video of the Surface in action (RBC applications are at the 9:50 second mark) and gives a good overview of the technology involved and what it’s capable of. Looks incredibly impressive… check it out after the break