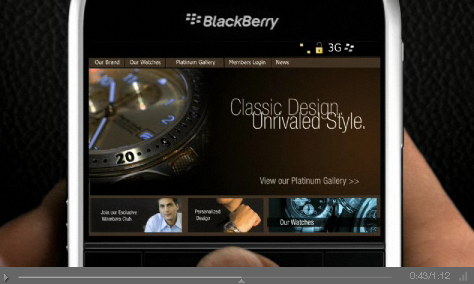 If you’re addicted to hearing about the not-yet-released-but-very-leaked BlackBerry Bold, RIM has a new promotional video that describes some of its features.

You will see that the video is very traditional as it has no musical into or background. It simply get to the point and demonstrates the features. It starts off by “Introducing the new BlackBerry Bold smartphone from Research in Motion. It’s a powerful business tool and the first BlackBerry smartphone to run on HSDPA cell networks.” The video goes on to say that you can talk on the phone while you send and recieve e-mails. Obviously the Bold comes with a full QWERTY keyboard and has the ability to download and edit files. Loaded with GPS, WiFi, external memory card and a “large screen that is great for watching movies”. The video wraps up with “Be Bold with BlackBerry.” We think it will be available at Rogers on the 17th of July.