Ni No Kuni II: Revenant Kingdom is a breath of fresh air after a string of bloody and gruesome games like Far Cry: 5 and God of War.

While it lacks an in-depth narrative and some of its predecessor’s Studio Ghibili magic, it makes up for it with a fun and challenging battle experience and cute Higgledies.

The game feature the tale of a young boy named Evan, who due to the death of his father, became the king of his land. Unfortunately, seemingly out of nowhere, his father’s royal adviser plans a coup and tries to kill him.

Evan manages to escape his kingdom with the help of Roland, a man that happens to be from our (real) world. However, instead of getting back his old kingdom, Evan decides it’d be better to unite the entire country of Ding Dong Dell into one whole peaceful kingdom that he names Evermore — where everyone can live happily.

This game’s story differs significantly from the first entry in the series, Ni No Kuni Wrath of the White Witch, which offered a darker, more emotional narrative. In the first game, a young Oliver loses his mother and his goal is to save her and bring her back. While in Evan’s tale his father does die and so does one of his beloved friends, trying to reunite the world and make it a happier and more loving place, isn’t quite as compelling a narrative.

If Evan had sought revenge against Mausinger, the traitorous mousekin adviser, it would have made for a more compelling tale. However, throughout the first fifteen hours of the almost 36 and a half hour campaign, alluring plot elements did keep me wanting to play more; including multiple dream sequences with a mysterious boy and the appearance of a snake-like character controlling one of the kings of Ding Dong Dell. 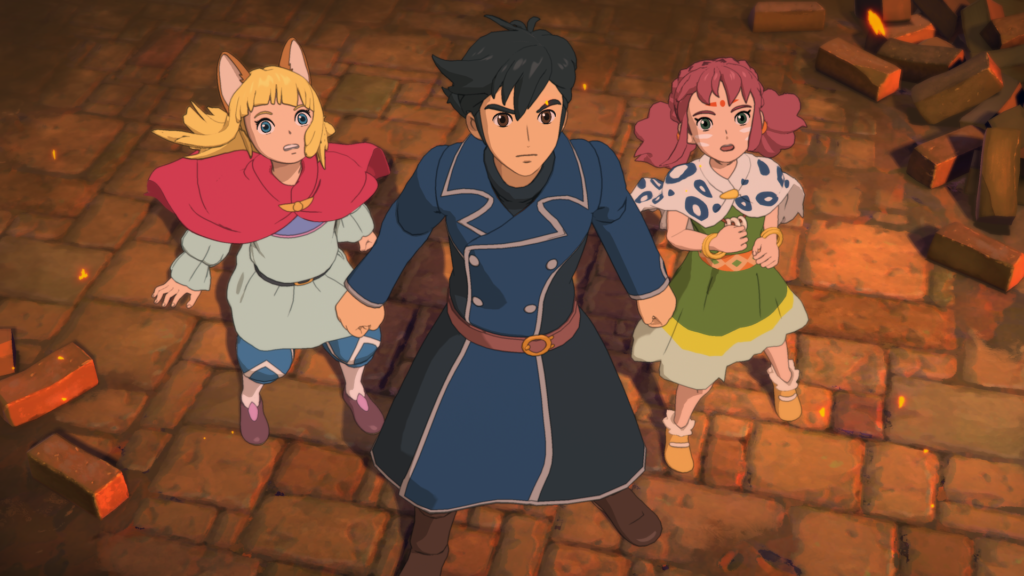 While the storyline has lost some of its flavour, in comparison to its predecessor, the Ni No Kuni II: Revenant Kingdom, the game has also lost its most appealing features — its Studio Ghibili-esque film sequences.

Definitely some of my favourite moments of the first game were the Studio Ghibili-made cut scenes that made me feel like I was watching movies such as Howl’s Moving Castle, Spirited Away, or My Neighbor Totoro. While Ni No Kuni II is stylized similarly to the first game, the fact that it lacked these truly moving cut scenes made a big difference for me.

However, I wouldn’t say my experience with the game was bad overall. Ni No Kuni II is full of vibrant colours and great animations. What the game lacked in Howl’s Moving Castle, it made up for in a well-delivered visually-pleasing experience.

Combat sequences are completely real-time in comparison to the previous game that featured both real-time and quick-time battle components. This results in an experience that feels more western, straying further from the series’ traditional JRPG style.

Evan’s spells and abilities are mapped to specific buttons and are easy to use in battle, as long as you have enough mana.

In the game, you can also switch between characters on the go, giving you more abilities to use against enemies. Evan offers a range of elemental spells, Roland features a number of slash moves that can wipe out multiple enemies at once, and Tawny, a female friend that Evan encounters on his travels, is equipped with more quick long range abilities. Similar to other role playing games (RPG) you can equip armour and weapons on these characters, level them up and choose between a number of abilities.

Ni No Kuni II removes the Pokemon-esque catching and using monsters to defeat your enemies in favour of finding little elemental Higgledies that are easily used in battle. After choosing between four Higgledies to use in battle that range from water, fire, wind, light, normal and dark elements, they’ll join you in combat. 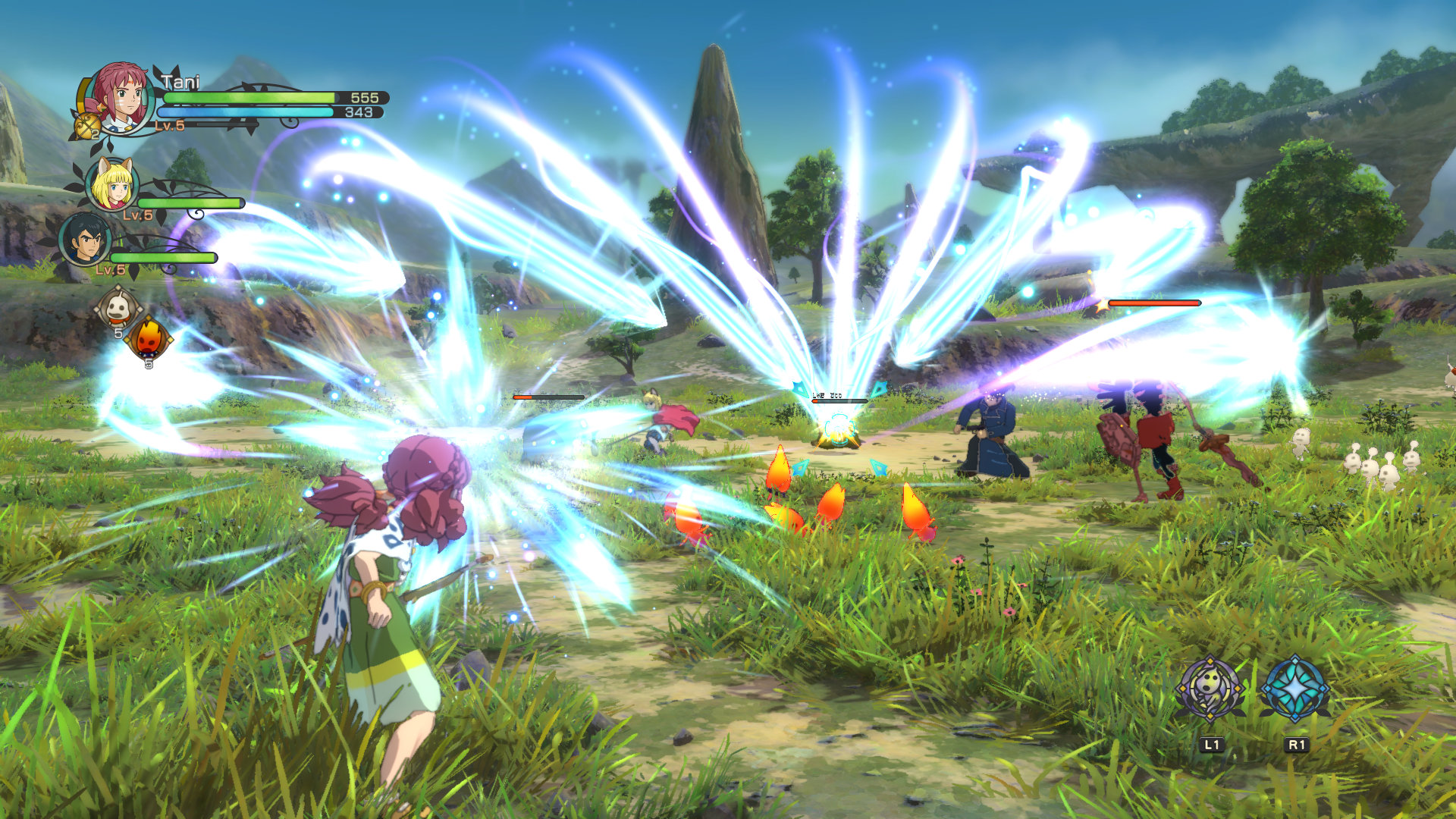 In combat they’ll gather with one another and a circle will appear around them. Evan, or whatever character you’re using, can activate the circle and the Higgledies will use an attack. One of my dark Higgledies will use an ability that creates a huge ball of gravity to injure anything in its vicinity. Higgledies will also provide passive assistance that may lower the stats of the enemy or send healing orbs while in combat.

One of the most intriguing aspects of combat is the ability to use battle points to control different sliders that’ll can make enemies of a certain type weaker against your attacks.

These sliders can also control different results of battle such as collecting rarer items or more experience, and are essential to conquer more difficult enemies. They can also be used to improve certain aspects of combat, such as improving evasiveness while dodging.

Probably the biggest differences between the two games in series is the kingdom building. After Evan claims an area within Ding Dong Dell he decides that this is where he wants to build his kingdom, Evermore. In order to do this he has to build and level up shops and laboratories, as well as find people to work for him. So throughout the story, there are many side quests that end up collecting more citizens of Ding Dong Dell to join Evermore and work in these various shops.

Some citizens are better at certain things than others, so keep that in mind when deciding who should work where. Also note that these laboratories are important for making Evan even stronger. You can create new spells and level up current spells so that Evan can use them in battle, while another actually cooks up new Higgledies. You are also able to collect money, food and other materials from your citizens.

Revenant Kingdom differs from its predecessor

Ni No Kuni II: Revenant Kingdom can be a challenging and intriguing experience and while it doesn’t offer the best storyline, it shifts things up with interesting characters and plot points that you want to learn more from.

While it lacks some of the depth of Ni No Kuni: The Wrath of the White Witch, it makes makes up for this with a fun battle system, an entertaining kingdom building aspect and cutesy Higgledies.

Ni No Kuni II: Revenant Kindgom is available on PS4 and PC.