EQ Bank combines chequing and savings for the mobile age 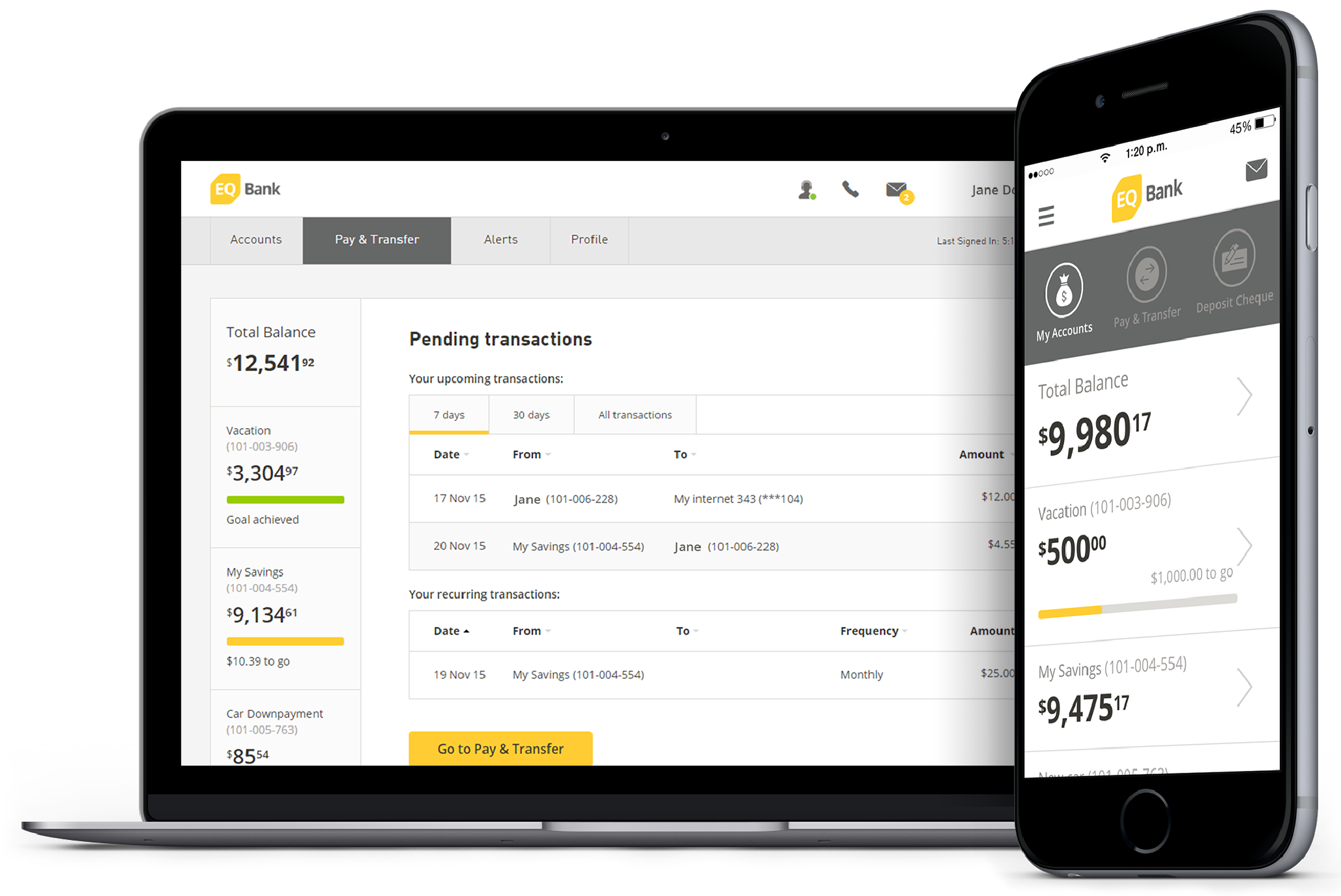 The story of Canadian banking is often likened to that the mobile industry: reliable, robust, but expensive, with a lack of sufficient competition from upstarts to force the incumbents to change their ways.

But as we meander towards the day when every Canadian has a smartphone, the number of companies purporting to use them to disrupt even those intractable industries as financial services is growing, and quickly.

One such company is EQ Bank, the digital arm of Canada’s seventh largest financial institution, Equitable Bank. Marketed as a full-service digital banking solution, EQ Bank launches today with iOS and Android apps and a number of features that separate it from other digital-focused banks like Tangerine.

To that end, EQ Bank has come up with what Director of Marketing and Sales, Bryan Dinh, says is a “solid digital-only product backed by an established brand.” Like other digital-focused banking products, EQ Bank’s first offering is a free savings account with unlimited transactions, allowing it to be used as what Canadians consider a chequing account as well. Dinh says that the lack of retail overhead allows EQ to offer an industry-leading three percent interest rate on all deposits, along with five free Interac money transfers per month.

Setup is easy, since Canada’s banking regulator relaxed rules around opening and signing legal documents digitally. After offering relevant personal details, EQ asks you to submit a cheque to yourself from your current bank, which can be deposited using the app’s photo-based submission tool.

Once the account creation process is complete, you’ll have to wait up to five days for the requisite KYC (know your customer) due diligence before being allowed access and then you’re ready to go. 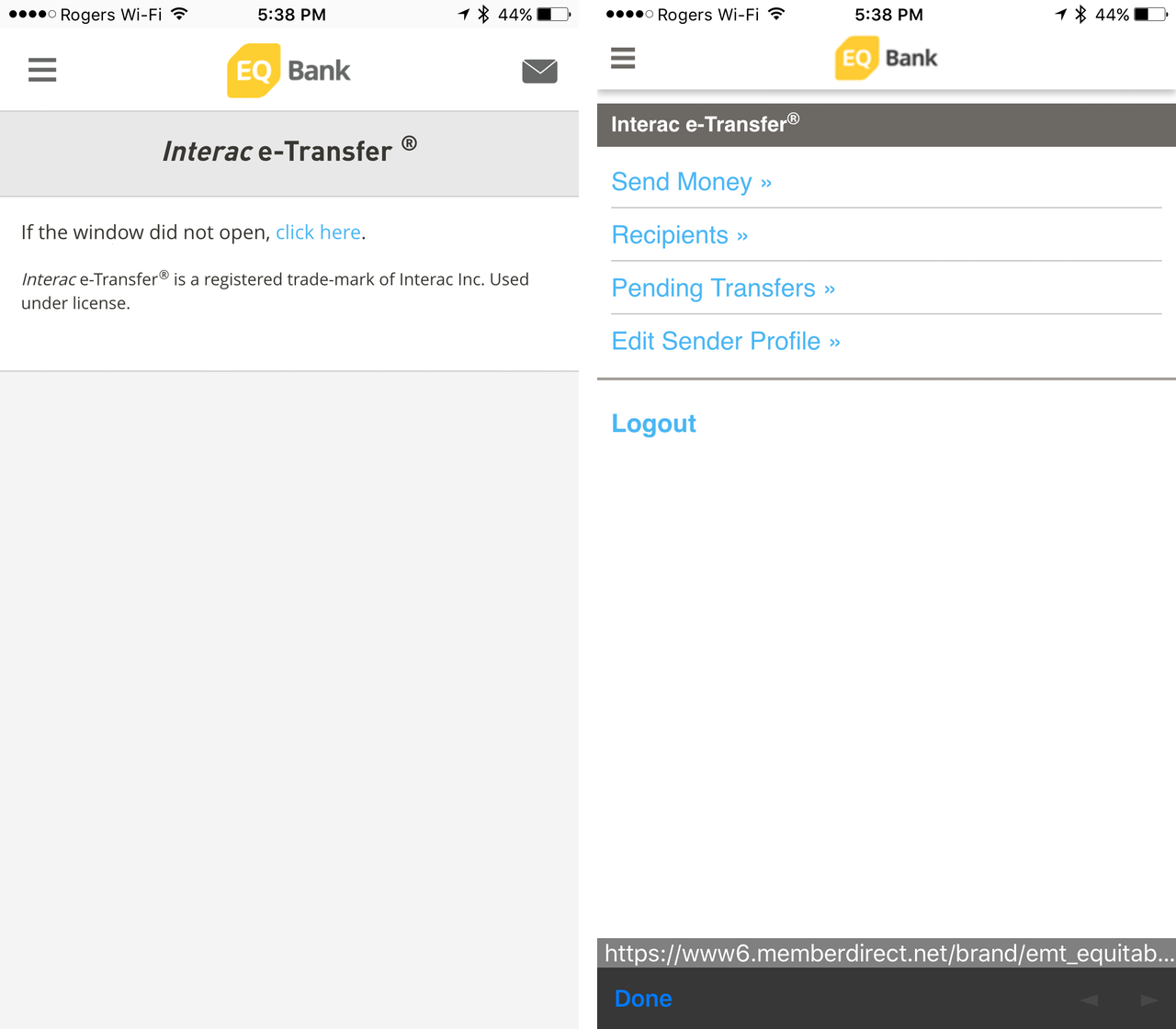 I had a chance to test EQ Bank for a few days before its launch, and came away impressed with its ambition, but disappointed with the early execution. The iOS and Android apps are web wrappers instead of natively built, making navigation slow and awkward. The process of sending an Interac e-transfer is especially cumbersome, forcing the user to open what amounts to a secondary browser window within the app.

After the initial deposit from an existing chequing account, EQ Bank uses it as a means to transfer funds to and from the service. And though those transfers can take a couple of business days to complete, Dinh reminds me that the free e-transfers allow users to share up to $2,500 per day in 10 to 15 minutes, even between their own accounts.

Finally, the app allows users to set up bill payments from directly inside the app.

At its core, EQ Bank is a good test of whether consumers are willing to spend more — not all, but an increasing amount — of time outside of their native banking environment. Because the service doesn’t offer cheques, money orders, or any retail experiences, it can’t be considered a full replacement. But over time, Dinh says, people will feel less of a need for those legacy fallbacks as they move to simplify and consolidate their finances. He notes that most people will be able to live almost entirely in EQ Bank’s offerings, since unlike Tangerine customers can hold high balances, generating interest, while using the unlimited transactions for bill payments and transfers.

At this point, EQ Bank has no plans to issue an Interac-powered debit card, either, so daily payments will still need to be made from an alternative credit or debit card issued by another bank. But the company isn’t focused on that; it wants customers to use the service to save money, and has developed goal-setting features within the app and the accompanying website. EQ also notes that because its parent company, Equitable Bank, is a federally-regulated institution, its deposits are protected by the Canada Deposit Insurance Corporation up to $100,000.

EQ Bank enters a market saturated with mobile banking apps of varying quality, but one that lacks the innovative, disruptive energy of our neighbours to the south. Due to strict regulations around the types of transactions customers are able to perform without signing their names on a piece of paper, and the entrenched relationships between the banks and companies like Interac, until recently the Big Six banks have only had one another to push them to make large-scale changes.

There are, however, companies such as Koho and Payso that are looking to make a noise within that regulated environment, and despite the fact that EQ Bank doesn’t fall quite within the definition of “upstart,” CEO Andrew Moor assured me at a recent personal finance conference in Toronto that the subsidiary is being run like a startup, and has ambitious plans to add quickly to its small array of valuable features.

In the meantime, EQ Bank’s basic value proposition is more fiscal than technological: three percent interest on all deposits and five free Interac money transfers per month is enough for me, and most people, to sit up and take notice.