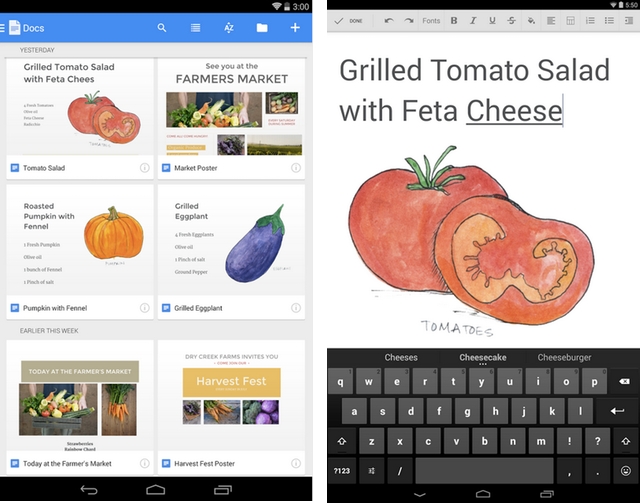 Google is separating the core productivity apps from its Drive product today by releasing standalone versions of Docs and Sheets for iOS and Android.

The company says that this will make it less confusing for users to quickly create a document or spreadsheet (and soon, a presentation) across its ecosystem while continuing to rely on the Drive cloud storage backend that many people use every day. The apps work almost identically to their formerly-integrated counterparts, though the designs have been slightly refreshed with new colours and some nips and tucks.

Both apps across both platforms support offline usage — every document in the core directory can be made available without an internet connection. Browsing your Google Drive directory hierarchy is limited, though, so these apps are, like iWork and iCloud, made to be simple: create a new document or spreadsheet; edit an existing one; share it with colleagues and collaborate in real time; and respond to comments.

What’s particularly interesting about the Android versions is the new Project Hera-like colour schemes: Docs has a flat blue background in the action bar, and Sheets has a similar layout in green. The left-side hamburger menu persists in both apps, but it’s nice to see a bit of colour in a couple of otherwise staid productivity apps.

Google says that a standalone Slide app is coming for presentations in the near future, too.