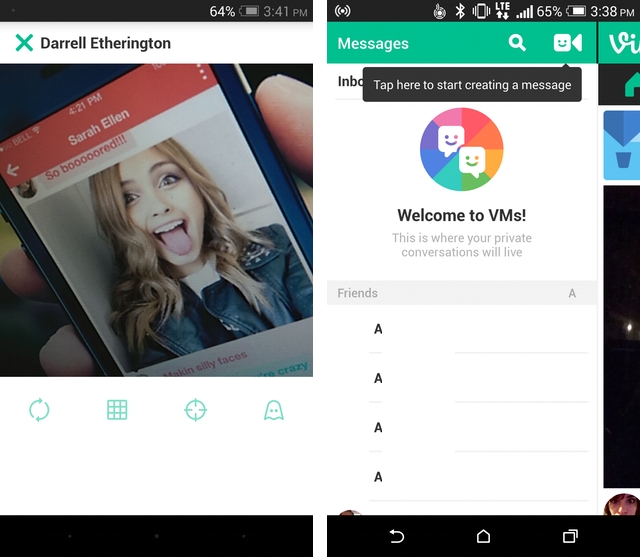 Vine has reached its version 2.0 milestone by adding an important feature that the Twitter-owned startup hopes will spur adoption: messaging.

Like Instagram before it, Vine’s private messaging feature revolves around adapting the core purpose of the app, in this case stitched-together 6-second video clips, for private chat. Users are now exposed to a new section of the app, which shows their entire contact list, even those not using Vine. The company hopes that this will encourage users to install the app if they haven’t already. While

Unlike Instagram Direct, which relies entirely on photos and videos, Vine Messages encourages text sharing, too, much like any traditional messaging channel. Vine Messages, or VMs for short, generate the same filming UI as before — which has been altered slightly on both iOS and Android — and, once finished, the message can be sent to one or multiple users. Group chat isn’t allowed for now, so sending the VM to multiple users will generate separate chat windows using the same Vine as a jumping off point.

Vine, which debuted on iOS in January 2013 and on Android six months later, hasn’t had the same success as its Facebook-owned counterpart, Instagram, but it has generated a fair number of “Vine celebrities” and talented filmmakers. The update is available now on iOS and Android.

From a performance perspective, Vine for Android appears to be much faster than its previous incarnations, processing videos at roughly the same speed as its iOS counterpart.