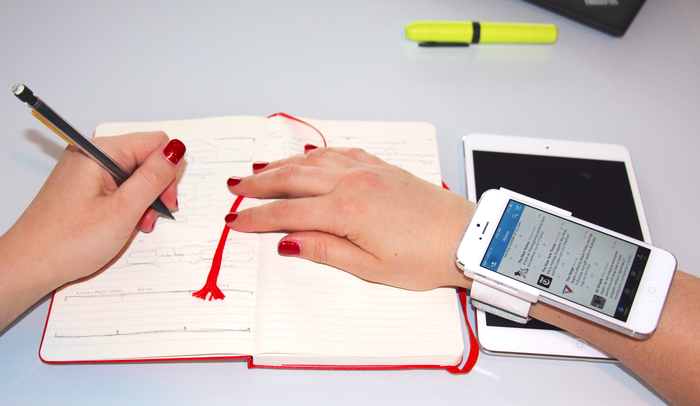 CES 2014 starts in a few days and is sure to bring with it an endless barrage of wearable technology news. As we pointed out in an earlier post that there was a problem with wearable tech in 2013: far too dependent upon the smartphone its paired with while providing limited additional functionality.

Smartlet looks to solve this problem by cutting out the middleman. This is actually a real idea and looking to raise $30,000 via Kickstarter, Smartlet is a custom wrist case for your iPhone. Yes, you read that right.

Smartlet features a patent-pending, unidirectional locking mechanism to prevent your iPhone from falling out of the case when meandering about on the town, while still allowing you to easily slide it out when then need arises.

While some of the photos of Smartlet in action on their Kickstarter page look as hilarious as you’d expect, and god help them if Apple increases the iPhone’s screen size (phablets need not apply), I must admit there’s a devious logic to the design that has won me over. Is wearing your iPhone on your wrist any less crazy than shelling out $200 for a bluetooth-enabled display that apes only a few of your iPhone’s features? Also, the whole concept reminds me of ReBoot, which was objectively awesome. “Siri, Reboot!”