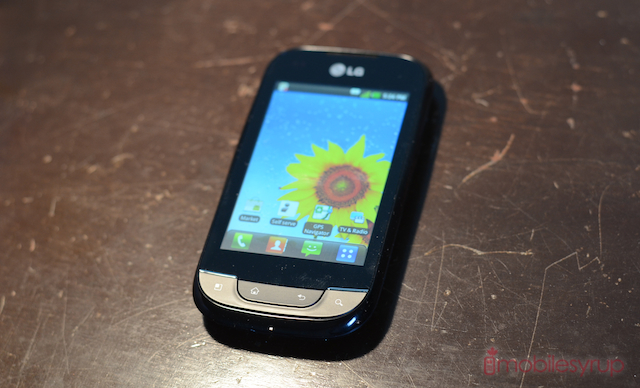 There is no masking the truth: lower-end Android phones tend come with lacklustre specs. So when a company releases an affordable, well-made Android phone that has decent specs, people tend to sit up and listen. The LG Optimus One was the first such device, and its follow-up, the LG Optimus Net, continues that tradition.

At $199.95 outright, both post and pre-paid, the Optimus Net takes what made the Optimus One such a popular device and tweaks it just a little. From a 600Mhz processor we move to 800Mhz, from Froyo we move to Gingerbread, while everything else stays the same — 512MB RAM, 3MP camera, 150MB internal storage, 480×320 resolution — keeping the price low.

Obviously the market for this device isn’t the same as someone looking for an iPhone 4S or Galaxy Nexus, but for $200 the Optimus Net is a compelling deal. Read on to find out if it’s right for you. 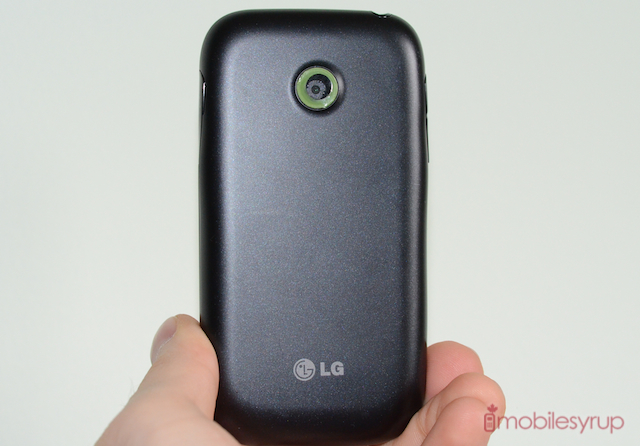 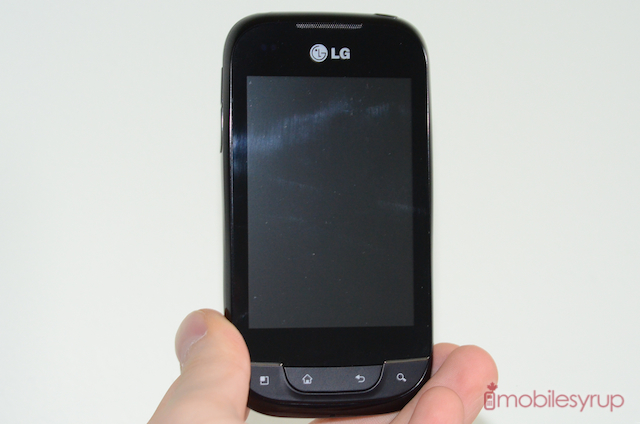 LG has created one of the hardiest entry-level Android devices to date. The Optimus Net is robust and heavy, and at 122g it matches some devices twice the size. Instead of feeling cumbersome it feels secure; this is a device you can easily drop onto concrete, toss in your bag or let your kid play with and not worry about it breaking. That being said there are some areas of the phone, such as the placement of the glass over the camera, that feel haphazardly slapped together.

The phone is also slimmed down quite a bit compared to the rotund profile of the original Optimus One. At 11.7mm the Net can’t be considered thin in today’s world of smartphones, but no one is going to make fun of it for being unsightly.

At 3.2″ and 480×320 pixels, the screen on the Optimus Net is decent. While it only displays 256,000 colours — most modern devices can display millions — for practical use the limitation is only a small hindrance. It does make photos and video appear washed out, though, with sloppy transitions between colours, but you get what you pay for in this regard. More worrisome is the low pixel density. Text suffers greatly from jagged edges and photos from softness.

Screen response, however, seems to be smooth enough. We had problems with keyboard responsiveness, but switching to a third-party keyboard solved the matter. App response was uniformly adequate, with only a slight delay when opening and exiting. Scrolling through web pages was a little more tiresome, as we had to wait often twice as long for it to load than we would on a high-end Android device. Once loaded performance was choppy but manageable; we’d recommend sticking to mobile versions of your favourite sites if possible.

The Optimus Net uses four hardware buttons below the screen for the standard Android functions, and they provide a mix of relief and frustration. It’s nice to have physical feedback to an often-pressed button such as Home or Back; it’s also much harder to accidentally press them if in landscape mode, for example. But the keys are not set precisely, often wobbling in place if hit from the side.

Inside the phone we have around 120MB of internal storage, and Bell bundles a 2GB microSD card for photo and video storage. Note that without such a card you cannot use the camera at all. 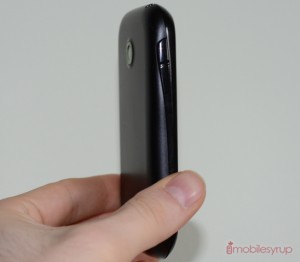 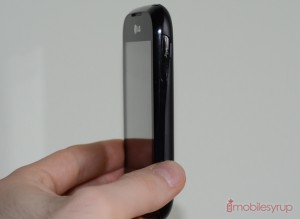 The 800Mhz processor inside the Optimus Net is only a slight speed improvement over the original Optimus One. A versatile and efficient chip, it’s also quite sluggish compared to most modern smartphones, and the only thing it really has going is that it’s inexpensive. That being said, we were not wholly disappointed with the performance of the Optimus Net. Other than an incredibly slow keyboard which could not, under any circumstance, keep up with our key presses, the device took what we threw at it with relative aplomb. Because of the low screen resolution, games like Angry Birds didn’t have to try very hard to run smoothly, while others like Wind-up Knight weren’t even available to download due to the underpowered GPU. Most apps do a fine job scaling down to the 480×320 resolution, but they tend to be squashed together and require a fair amount of scrolling.

Overall performance is what one would expect from a $200 phone. It’s nowhere near the experience of even, say, an original Samsung Galaxy S; its competitors are more like the HTC Wildfire and Samsung Galaxy Gio. While you may be able to do most of the things you would do on a more expensive device, they won’t be done quickly or vividly. If you’re looking for a bare-bones calling/texting/emailing/minimal browsing/seldom gaming device, the Optimus Net is a good option.

From the call quality and speed side of things, the Optimus Net supports 7.2Mbps in the downlink and 5.76Mbps in the uplink, and we netted a cool 2Mbps on average in both directions. Calls sounded quite good and we experienced no dropped calls on Bell’s network. 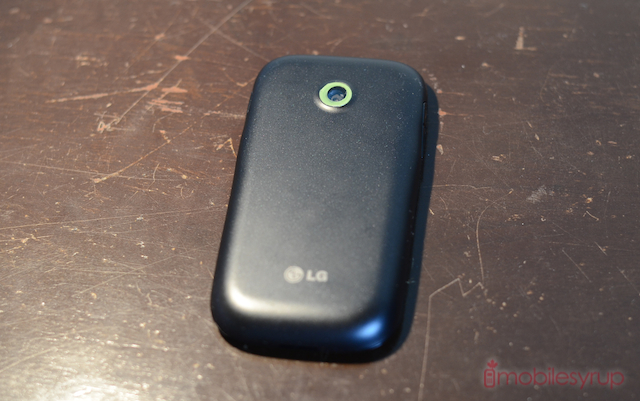 The LG Optimus Net has a 3.2MP camera, and in the right setting shots can turn out decently well. We’re not talking high-end optics here — think BlackBerry 9700 circa 2009 — but in the right lighting results are surprising. That being said, these are not pictures you’re likely going to blow up and display on a billboard, and without a flash the Optimus Net suffers from what most similar phones do: a paucity of low-light performance. Colours are washed-out and white balance is completely off: we found the auto-white balance sensor unpredictable, changing from outdoor to tungsten to incandescent without warning. As you can see from the sample photos, results are mixed. 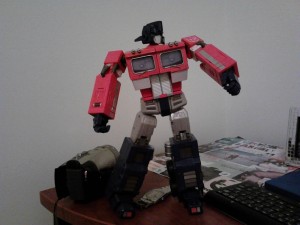 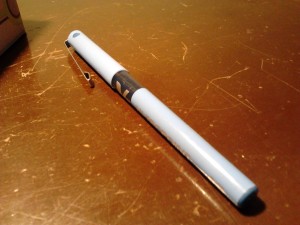 Like on higher-end LG devices, the interface is clean and usable, with easy two-touch navigation for most options. You can adjust ISO and white balance, and add colour effects to suit the mood. Most of the images we took indoors turned out grainy and dark, but the results are to be expected from such an inexpensive device. 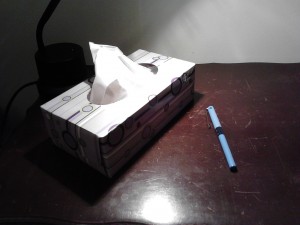 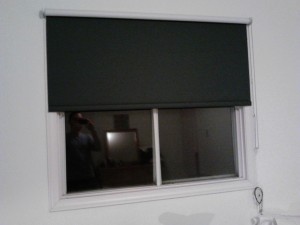 On the video side, the Optimus Net can film 640×480 at 30fps, a resolution we wish would die sooner. It suits cat videos on YouTube and very little else, and as processors get quicker we expect 720p to be the minimum resolution, even on low-end devices, before the end of 2012. At least we hope that’s the case. 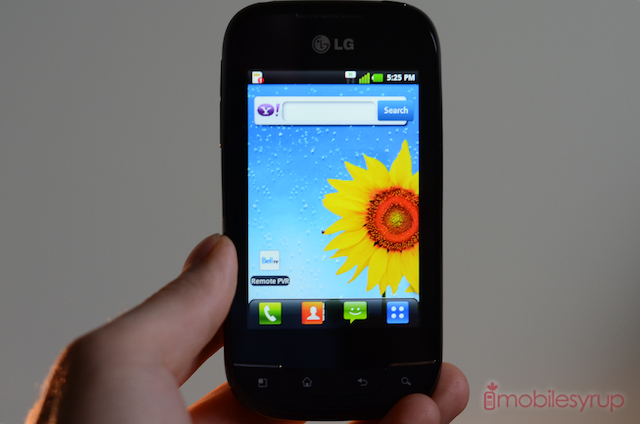 The Optimus Net, ahem, netted us very good battery life. With a spacious 1500mAh battery doing work much less taxing than similar-sized batteries have to do on high-end Android phones, it wasn’t uncommon to see the three or more days of moderate use from the device. In our standard cat video loop test, we eeked out 12 hours and 14 minutes from the phone, one of the best numbers we’ve seen on Android. 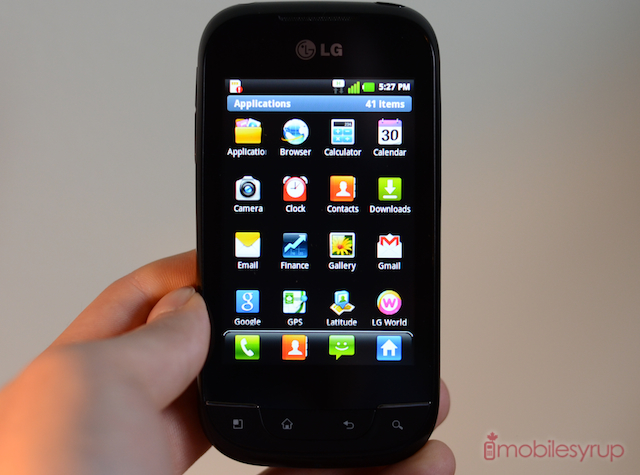 The Optimus Net is dressed up like someone ready for the party, and though it doesn’t quite make the same impression as its big brother, the Optimus 4G LTE it comes with all the same clothes.

Running Android 2.3.4 with a minor-tweaked skin, we device comes with RemoteCall, SmartShare and LG World, along with some Bell additions. The three aforementioned apps are provided by LG and allow for remote technical support, DLNA content sharing, and third-party app downloads, respectively. None of them are essential, and the Bell stuff is pretty fluffy — TV&Radio is the only one of note — but they’re not intrusive.

Moreover, you have access to the Android Marketplace, of which most apps are available for the Optimus Net. Any that aren’t, like most 3D games, have been filtered for the device due to its weak processor, but we had no problems finding 95% of our regular suite of apps. 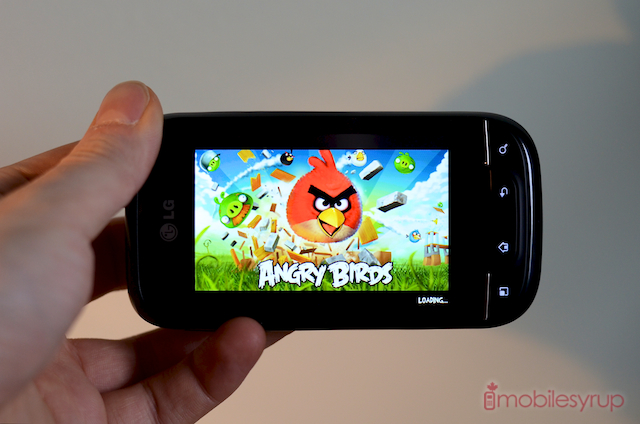 The Optimus Net is one of the best entry-level Android devices currently available, and should be an easy justification for parents looking to get their kids a smartphone without breaking the bank. For anyone looking at a first-time smartphone, the Optimus Net is a decent choice. However, unless you’re really, really desperate to save money, we’d recommend spending an extra few dollars on a 3-year term, or an extra $100 outright. The performance, app compatibility and additional features and overall experience will be enhanced, something that you’ll dramatically enjoy long term.

The LG Optimus Net is available for $0 on a 3-year term and $199.95 on Bell prepaid, or bought outright. It is also available at Best Buy and Future Shop.