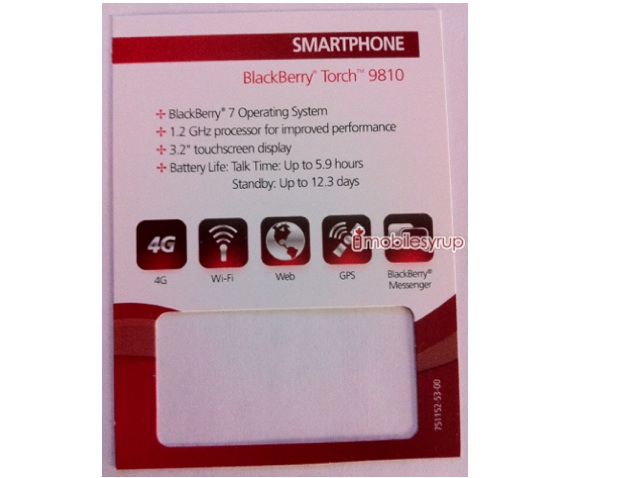 RIM said that they’ll be launching a total of 7 new BlackBerry smartphones in the next few months. Only the Bold Touch 9900 has officially been announced, this was back in May at BlackBerry World. Since then there has been a number of leaked documents that showed some of RIM’s upcoming handsets: BlackBerry Torch 9860, Torch 9810 and Curve 9360. Bell and TELUS are ready to unload some or all of these devices, today we bring you confirmation that Rogers will be adding the Torch 9810 to their lineup.

The above price card is for the Rogers BlackBerry Torch 9810, a follow up to the original Torch 9800. Missing is the actually price and launch date but this confirms again that the 9810 will be powered by BlackBerry 7 OS, come with a 3.2-inch touchscreen display (and QWERTY keyboard), have a 1.2GHz processor and is “4G”.