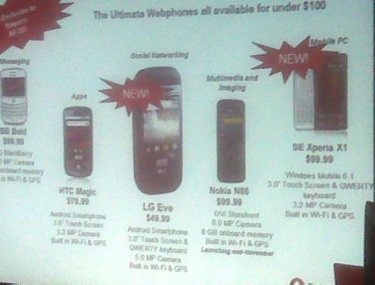 There has been much talk over the past week about the upcoming launch of Bell and TELUS’ HSPA network. In addition, people are talking about their upcoming lineup as it looks to be a stellar first round of devices (See Bell devices here and TELUS devices here). Then on the new carrier side, Canadians are waiting patiently until Thursday when the CRTC finally announces their decision if WIND Mobile will get the official green light.

Wanting to know what Rogers has planned for the upcoming quarter? According to “PhoneModo” from HowardForums who states that “Rogers wants to go away from the smartphone monicker that Blackberry’s and other data devices carry, so they’re focusing on ‘Webphones’ this year. A website will be up in the next couple days (something like www.rogers.com/webphones) to further this idea.”

Most likely starting next week we’ll see their advertising tagline be “5 Webphones for less than $100”. The 5 webphones are:

HTC Magic – already available but will be priced at $79.99 on a 3-year with Voice and Data plan
– 3.2MP Camera, 3-inch Touchscreen, Android, WiFi, GPS