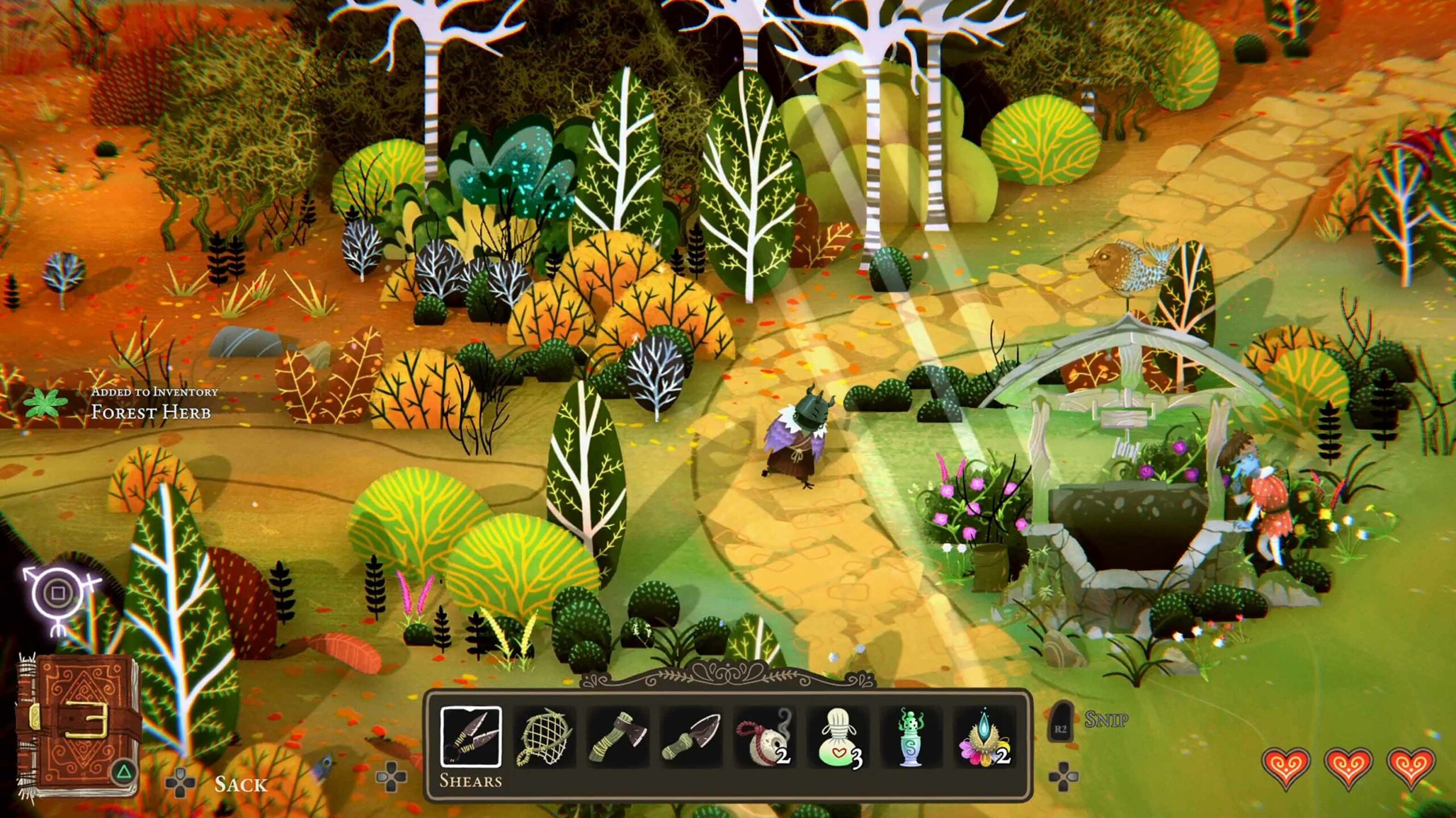 Every once in a while, PlayStation runs an ‘Indie Spotlight’ on a bunch of different games from independent developers.

It’s a great way to discover new games, and it’s precisely how I learned about a particularly interesting one earlier this month — the crafting adventure game Wytchwood from Toronto-based Alientrap.

I admittedly wasn’t familiar with the studio, which has developed such titles as 2015’s Greek mythology-inspired platformer Apotheon or 2016’s sci-fi roguelike Cryptark. It’s a surprisingly varied mix of genres, especially for a team that normally consists of four or five people, making it all the more impressive that Wytchwood tackles a completely different type of game.

“In contrast to our previous action-focused games, we wanted to try and make a more narrative-based experience that was open to a wider audience,” says Wytchwood creative director Jesse McGibney over e-mail of the conception of the game.

From there, the idea came about to have the game focus on a magician who could concoct all kinds of magical potions and spells. But if you’re expecting the sort of spry, young male protagonist that dominates fantasy stories, you’re in for a surprise. In the opening moments of Wytchwood, our hero rises from a chair alongside the message, “Her bones may creak, but they’ll hold her up…”

That’s right — in a refreshing change of pace, you play as an elderly witch. “We knew we wanted her to be [of] the classic ‘warts and newt-eyes flavour’ —  a proper cranky old lady that so often takes up the villain role in these sorts of fables,” says McGibney.

In assuming the role of this mysterious witch, players will journey across a bizarre countryside to, as Alientrap describes it, “pass your twisted judgment upon a capricious cast of characters and creatures.” The witch is caught up in a dark pact that she doesn’t remember making, which forces her to travel the lands — including forests, swamps and mountaintops — to uncover her past.

“Alientrap wants Wytchwood to have a ‘chill’ vibe to it.”

According to McGibney, part of the goal in focusing on the old hag was to “go against the norm” of not only the sorts of protagonists we often see, but of traditionally “cute and sweet” depictions of “‘witchy’ characters” as well. “But it’s mostly because we think the old-fashioned witch is such an interesting archetype,” he admits.

“We wanted to capture the wit and sass that a character like that has. She’s seen it all, is wiser and more experienced than most everyone else she meets and doesn’t hesitate to put them in their place, even if she’s got a few cobwebs in the attic.”

The protagonist being up there in years also lent itself naturally to the type of adventure-focused gameplay that Wytchwood would ultimately offer. After all, big action-packed spellcasting battles aren’t exactly something you’d expect to see such an aged character taking part in. 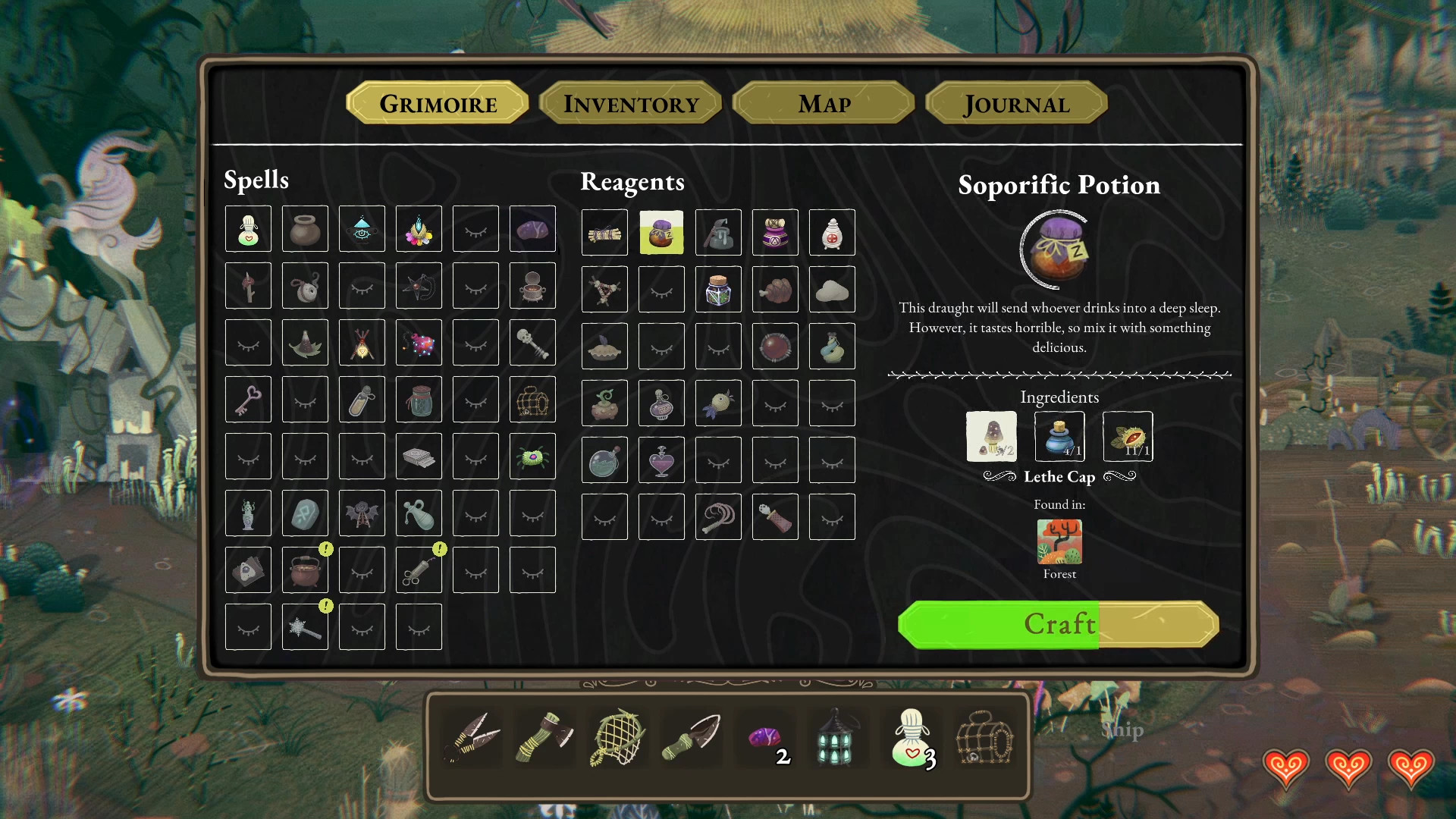 “She’s not a [Dungeons & Dragons] wizard throwing fireballs at orcs, she’s a grumpy little hermit who picks poisonous mushrooms to brew magical elixirs,” he says. “The witches that appear in these stories are never about using brute strength or fast action, they’re about sharp tongues and tricking people who (sometimes) have it coming!”

To that point, Alientrap wants Wytchwood to have a “chill” vibe to it, per the original PlayStation Blog post. This meant emphasizing “exploration and easy-paced adventure,” says McGibney.

“There are enemies in the game, but you’re not asked to dodge bullets or perform intense action combos.” Instead, the challenge comes from gathering the necessary ingredients to create your potions and spells and successfully applying them to overcome obstacles.

One example Alientrap cites in the PlayStation Blog post would be to use the ‘Snagvine’ spell to entrap a moving pumpkin. When asked about other parts of the witch’s magical arsenal, McGibney says he doesn’t want to give much more away, “as the bag of tricks [she] uses ties directly into the narratives she’s unravelling.”

However, he did tease that you’ll be able to “spin oddities like rainbow yarn that bedazzles those wrapped up in it, a magical marionette sporting a familiar red riding hood, and even an alchemist’s stone to turn wheat into gold.” 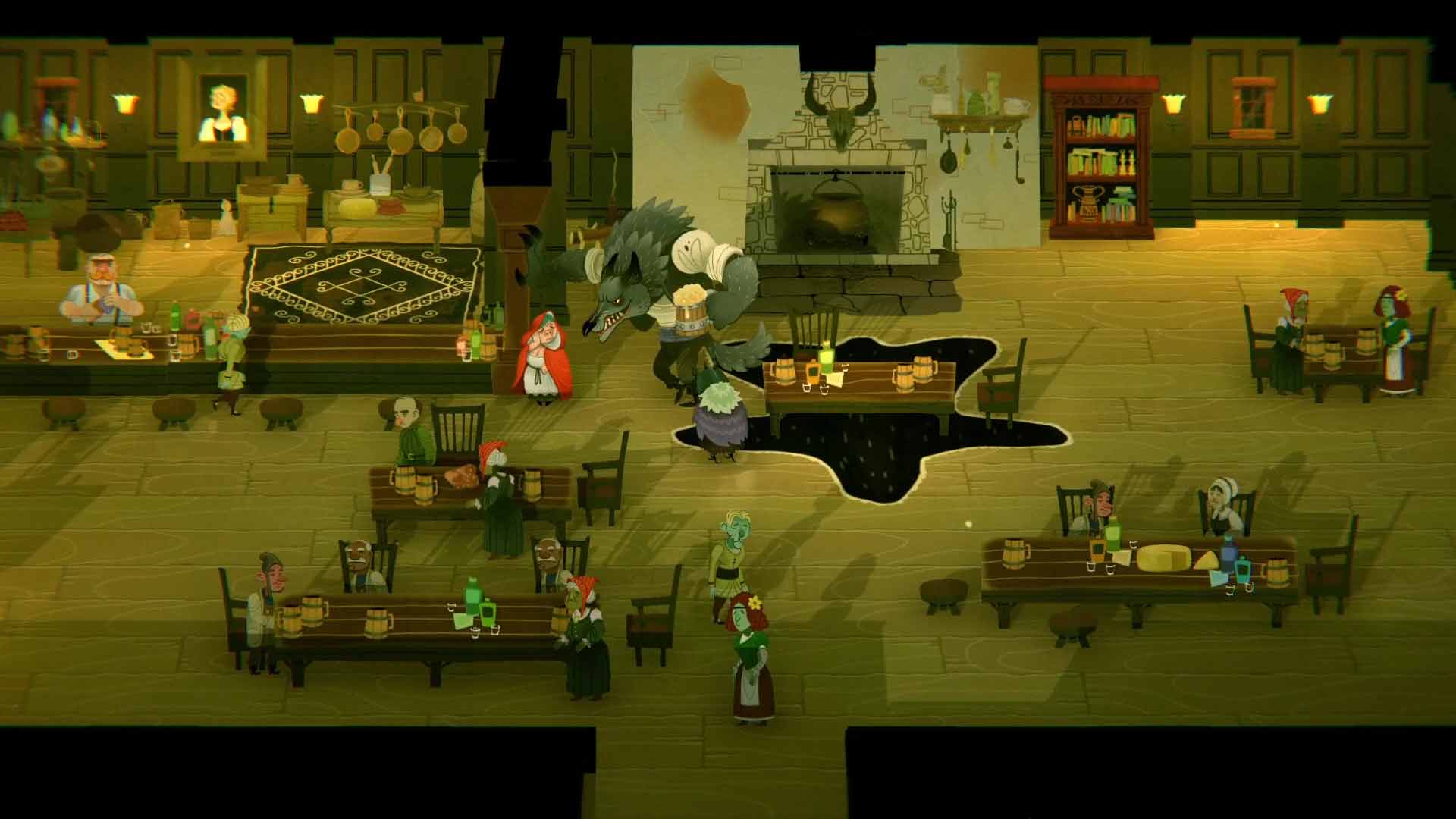 McGibney is, of course, referring to the popular European folk tale the Little Red Riding Hood. Indeed, to create the world and characters of Wytchwood, he says Alientrap looked at many fables from the likes of Brothers Grimm and Giambattista Basile.

“A lot of them are really weird, nonsensical, or don’t make much sense in a modern context, but they were great fun to read,” says McGibney. “One of our favorites [“The Wishing-Table, The Gold-Ass, and the Cudgel in the Sack”] was about a donkey that pooped treasure.”

“McGibney says Wytchwood has been made to be ‘dark and weird, but not grotesque.'”

However, McGibney is quick to point out that the game doesn’t make any “one-to-one interpretations” of any of these fables. “We wanted to capture the overall strange, wacky, and sometimes dark tone of these types of tales,” he says of this approach. “Many of the characters in the game pay obvious homage to some well-known fairytales, such as a very hungry wolf, or industrious pig siblings.”

These inspirations resulted in Wytchwood‘s striking hand-drawn storybook aesthetic. “What better way to capture the tone of those stories than making the game look like a pop-up picture book?” he explains. “We took a lot of inspiration from Golden Age Disney movies, as well as medieval- and Renaissance-era book illustrations. We tried to blend the two together into something cartoony and colourful, but also a bit twisted and moody.” 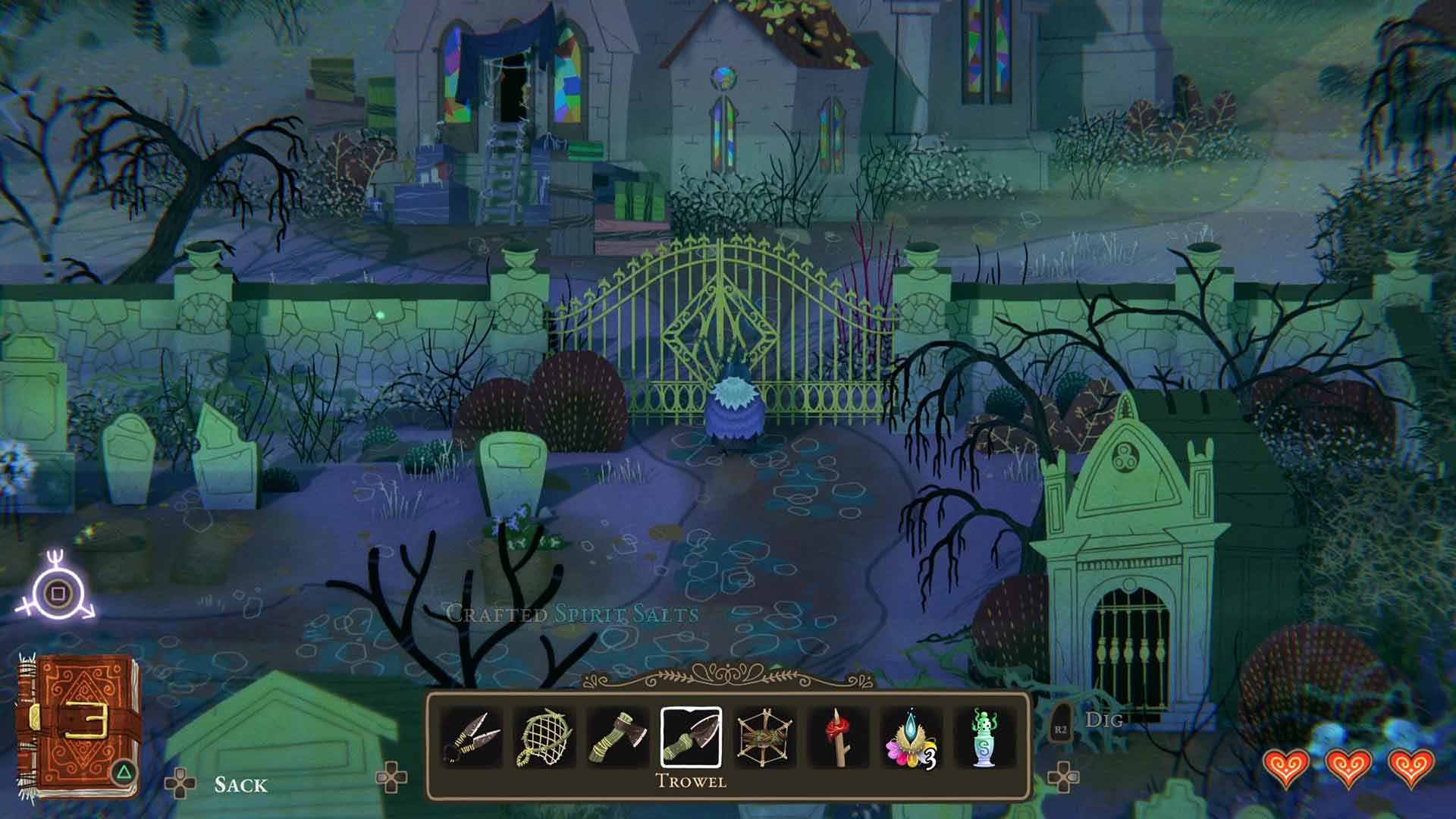 Ultimately, McGibney says Wytchwood has been designed for both Alientrap fans and new players alike.

“A lot of our games are reactions to our previous games,” he notes. “Our last game, Cryptark, was a roguelike that required a lot of technical skill to play, so for this project, we wanted to try our hands at something a bit more easy-going and accessible.”

For that reason, McGibney says Wytchwood has been made to be “dark and weird, but not grotesque.” Instead, he promises, it will be “fun for anyone who enjoys fables but is maybe sick of some of the sugarcoating” that can be found in versions of them.

“If you like exploring a colourful game world and playing through stories featuring plenty of odd characters, then Wytchwood is for you.”

Wytchwood is set to release sometime this fall on PlayStation 4/5, Xbox consoles, Nintendo Switch and Steam.

This interview has been edited for language and clarity. It’s also the latest entry in our monthly Canadian developer interview series. Last month’s feature, which focused on the Toronto-made The Big Con, can be read here.