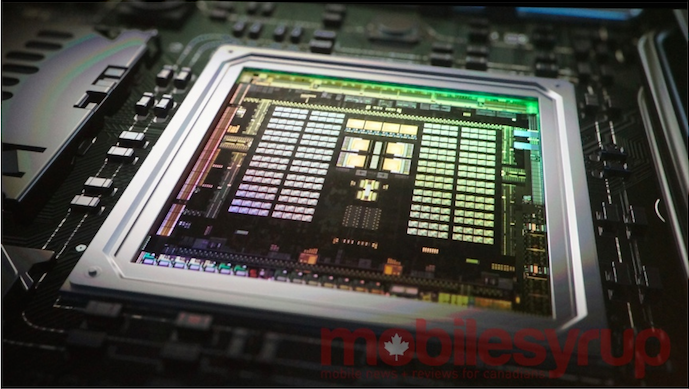 CES doesn’t start until Tuesday, but the big announcements are happening right now, at various hotels along the Las Vegas Strip. On Sunday night, Nvidia topped last year’s Tegra K1 unveiling with the announcement of the Tegra X1, a brand new chip that is at least twice as powerful as the K1.

Nvidia CEO Jen-Hsun Huang took to the stage at the Four Seasons Hotel and jumped right into the juicy stuff. No statistics or company updates here. Huang first reminded us that it was just a few months ago that Nvidia announced its Maxwell architecture, which offered performance twice that of Kepler. Kepler took two years to make it to mobile in the Tegra K1. However, the same is not true of Maxwell. The Tegra X1 brings the Maxwell GPU to mobile in just four months.

This is the world’s first mobile processor to pack a teraflop of processing power, offering twice the performance of the Tegra K1, the most powerful mobile processor available today, while being twice as efficient. It boasts twice the performance with the same power envelope, so it’s actually capable of more if the power is increased beyond what the K1 consumes today.

To put things in perspective (and to once again hammer home just how fast the industry is moving): fifteen years ago, the most powerful super computer in the world was one teraflop. Nvidia has now managed to pack all of that computing power into one tiny chip.

A real world example of the Tegra X1’s graphics processing power can be found with Unreal’s ‘Elemental’. When the PS4 and Xbox One launched last year, they consumed about 100W running Unreal Engine 4 Elemental. The Tegra X1 consumes about 10W running the same demo.

The Tegra X1 is very impressive, but if you’re drooling at the thought of your phone doing all of this, we’ll stop you right there, because this chip won’t be in your phone anytime soon. Nvidia plans to utilize the Tegra X1 in cars, which makes sense, especially when you consider the K1 is still top of its class in mobile processing. Phones do not need the X1.

Instead, Nvidia is envisioning a future where the inside of your car is rife with displays that cover everything from the mirrors (rearview and side) to the roof pillars and backs of head rests, as well as cameras. The Tegra X1, which can do 4K video at 60 Hz with 10-bit in both h.265/VP9, will power them all.

To that end, Nvidia announced the Drive CX, which is powered by TX1 and will include Drive Studio. Drive Studio is supposed help designers access take advantage of the chip’s power, and is an infotainment system, as well as a virtual cockpit or dash. It supports every major OS, from QNX to Android Auto.

More interesting, though, is that Nvidia believes that the TX1 will facilitate true auto-pilot, as well as numerous other advanced driver assistance systems. This includes lane-departure warnings, collision avoidance, blind-spot detectors, parallel parking assists, and more. Two Tegra X1s can power up to 12 cameras and process 1.2 billion pixels a second. All of this information feeds into Drive PX, which is what Nvidia is calling this mobile super computer with dual TX1 chips. All of this data and processing power, along with real time software updates and machine learning, will be enough to make your car situationally aware. That means it can identify different vehicles, even emergency vehicles (and tell you went to pull over), point out speed cameras, and tell the difference between cyclists and pedestrians.