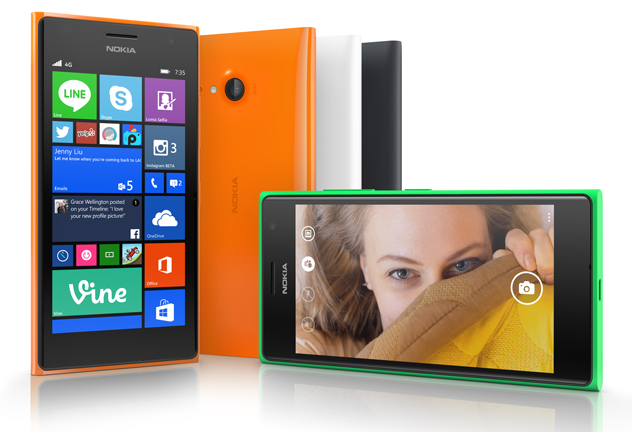 We’ve been hearing rumours about Microsoft’s plans for a selfie phone for weeks, and the company finally lifted the cover on the Lumia 730 this morning at IFA.

As rumoured, the Lumia 730 packs a 5MP sensor up front for higher quality images and better video from the front-facing camera. This is helped along by Microsoft’s Lumia Selfie application, which Microsoft says will help you create “original selfies” with the aid of filters, skin enhancements, and other tools for editing your photos. For those that used Microsoft’s ‘Glam Me’ app, this will be very familiar. Microsoft has already said that Lumia Selfie will replace Glam Me and it’s based on the same idea: enhancing your self-portraits before sharing them with friends.

Microsoft has also rolled in Skype to the experience and allows users to switch from voice to Skype video calls at the touch of a button. It’s also promising improved audio thanks to new noise cancelling technology and microphones. Select markets will also get three months of free Skype Unlimited World, though Microsoft hasn’t said which markets.

Camera aside, you’re looking at a 4.7-inch 720p display, as well as 1.2 GHz Snapdragon 400 chipset, 8 GB of storage (plus the usual 15 GB of SkyDrive) as well as support for up to 128 GB via MicroSD, and Dual SIM support. The rear-facing camera is a 6.7MP sensor with an improved camera app and LED flash, and the battery clocks in at 2220 mAh.

Nokia also announced the Lumia 735, which is the same device but with LTE. Other than the addition of LTE, the 735 boasts wireless charging but loses out on the dual-SIM support.

Both the Lumia 730 and Lumia 735 will be available this month. Market-specific launch dates were not available but we’re assuming the euro pricing means these devices will launch in Europe first. The Lumia 730 will be priced at €199, while the Lumia 735 will cost a little more at €219. No word on North American availability just yet.