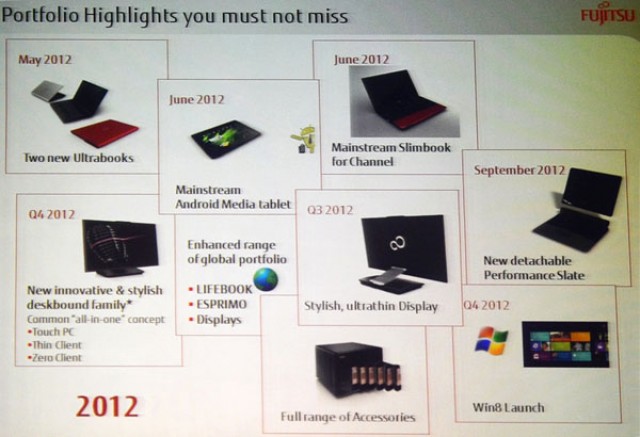 A leaked roadmap for Fujitsu’s laptop and tablet lineup has stoked the fire of an entry into the North American market. We took a look at a Japanese-only Arrows waterproof tablet during CES, but there was no word on whether that, or any other device, would come to North America.

If the roadmap is to be believed, this entry will happen around June 2012, likely an Ice Cream Sandwich tablet running Tegra 3. We know that the company has developed and is expected to release a Tegra 3-powered smartphone at Mobile World Congress (I got to try it during CES, and it was awesome) so it wouldn’t be too much of a stretch to expect the same chip in a tablet.

Then in September, Fujitsu is looking to release an EeePad Transformer competitor, with a cross-over view to existing laptop owners. Whether this will coincide with the dual boot-enabled Android 5.0 release remains to be seen, though we doubt it. In Q4 Fujitsu is also going to release a Windows 8 Slate, so we know a lot of vendors are jumping on the Windows On ARM bandwagon.