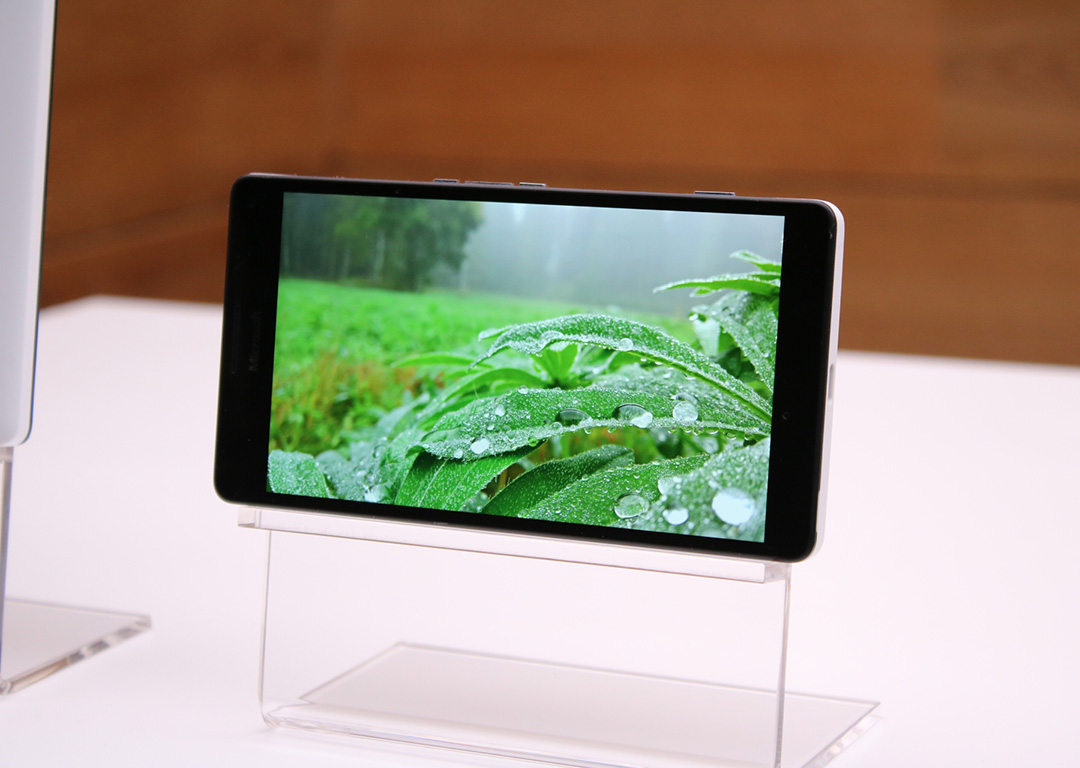 During Microsoft’s keynote presentation today, the company laid out plans to reboot its Windows Phone platform yet again, this time with the help of two new Windows 10-based flagship devices devoid of Nokia branding: the Lumia 950 and Lumia 950 XL.

Last July Microsoft announced it had plans to undergo major restructuring and the first step involved laying off 7,800 employees. Next, Windows, Windows Phones, Surface, Xbox and HoloLens were united under one single Microsoft devices banner. Today it looks like we’re finally getting our first glimpse at the outcome of the company’s internal restructuring.

The Lumia 950 and Lumia 950 XL have been the subject of a variety of leaks over the last few months and were at one point even listed on Microsoft’s website accidentally. It seems the rampant speculation was correct and both devices have lived almost perfectly up to earlier rumours. The Lumia 950 and Lumia 950 XL will both run Windows 10 and support universal apps, which Microsoft is hoping will help the company catch up to Apple’s iOS App Store and Google’s Play Store when it comes to application numbers and availability. 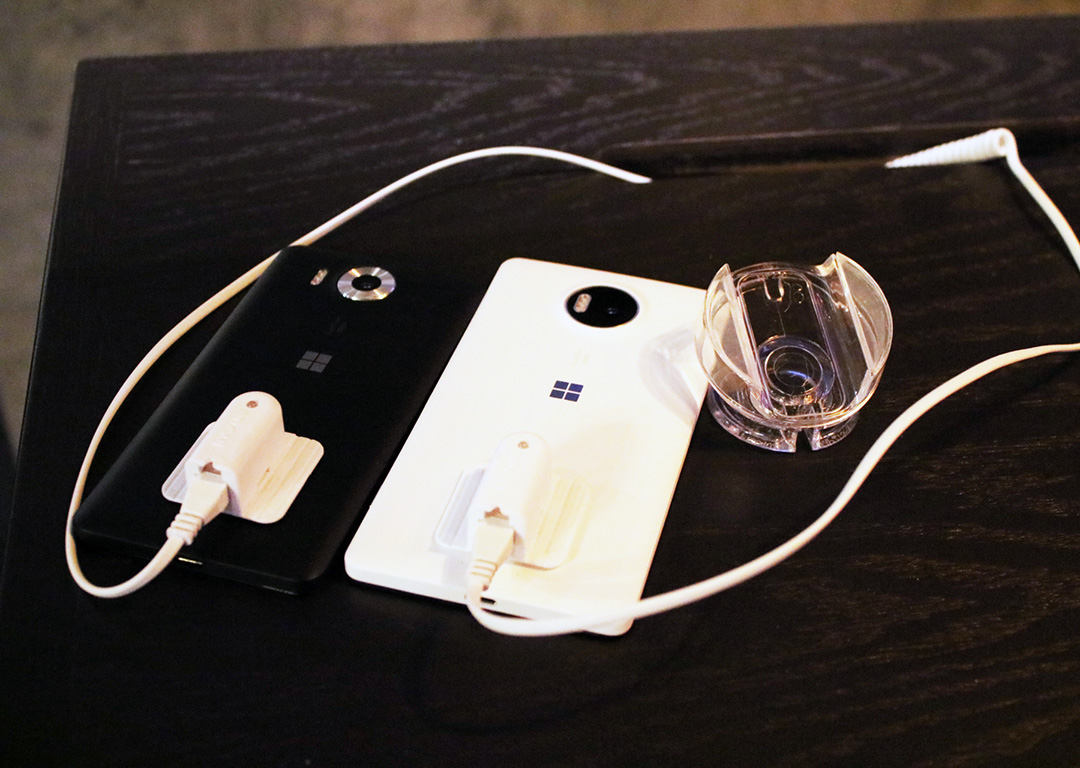 In terms of technical specifications, early rumours also continue to be spot on. Both devices will come equipped with Qualcomm Snapdragon processors, the 5.2-inch Quad HD AMOLED display Lumia 950 a six-core Snapdragon 808 and the 5.7-inch Lumia 950 XL an octa-core Snapdragon 810. Both Lumia 950 device’s rear cameras also measure in at 1/2.4″ 20 megapixel sensors with an F1.9 lens and optical image stabilization, and 5 megapixels on the front-facing camera.

The specs sheet is rounded out with USB Type-C quick charger, 3GB of RAM, expandable storage (up to 300GB), 32 GB of internal storage, and Windows Hello Iris Recognition, which during my hands-on time with the smartphone seemed rather impressive, although it will be interesting to see how the feature preforms under real world conditions. Iris Recognition is set to allow users to log into their devices simple by looking at the smartphone.

But internal specs don’t mean much when it comes to a new operating system until you actually go hands-on with it and see how it performs. While the results of my hands-on time with Windows 10 Mobile left me walking away impressed – Windows 10 Mobile is just as snappy and fluid as Windows Phone 8 – but the Lumia 950 is still a Windows phone, so major issues such as a limited app ecosystem continue to crop up. Although Microsoft is banking that its new Continuum feature will solve this problem. 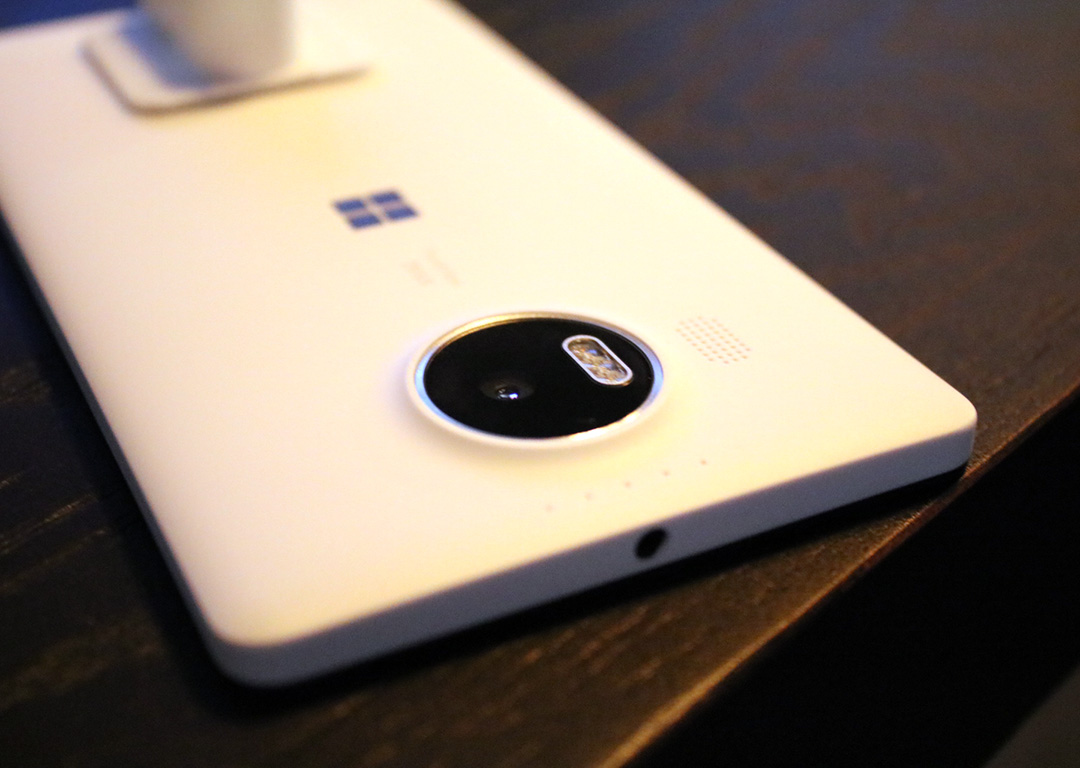 Microsoft’s big pitch with both devices is called Continuum, a feature the company has discussed in the past touting that it turns Windows 10 smartphones into Windows 10 PCs. Plugging the Lumia 950 or Lumia 950 XL into Microsoft’s new Display Dock turns the smartphones into a Windows 10-based PC, allowing the user to take advantage of a larger display, mouse and keyboard.

While this sounds impressive in theory, how does Continuum actually perform? While I was only able to view a brief demonstration, Continuum looks very promising. What’s interesting is users are able to run two different apps simultaneously, one on their phone’s display and another on an external monitor. While it’s still unclear how well this feature will perform when using more resource intensive apps, during my hands-on time with the smartphone I watched two Office apps run flawlessly at the same time.

However, it’s important to point out that whether Continuum actually ends up taking off will depend on app developers and their willingness to support universal Windows 10 applications.

While snapping just a few photos with the Lumia 950’s new 20 megapixel sensor isn’t close to being enough to judge the smartphone’s camera capabilities, my brief hands-on time with the Lumia 950 and 950 XL’s camera left me impressed. The lighting at Microsoft’s event was dark, dingy and far from ideal.

Even under these conditions the Lumia 950’s camera took decent photographs that didn’t seem to feature a significant amount of noise or grain.

In terms of aesthetics, there really isn’t much to say about Microsoft’s new smartphones. Both the 5.2-inch Lumia 950 and 5.7-inch Lumia 950 XL feature bezels that feel slightly too large. It’s also important to point out that both device’s backings are polycarbonate, which means the smartphone feels great in your hands, but might not end up being that durable. Those backs, though, are removable, giving access to the replaceable battery within. The larger phone features a 3,340mAh battery with fast charging and wireless charging; the smaller Lumia 950 has a 3,000mAh battery with the same features.

The devices also adopt the same basic slab design we’ve seen from almost every smartphone manufacturer over the last few years, and there really isn’t anything particularly memorable about either the Lumia 950 or the Lumia 950 XL’s build. And similar to the iPhone 6s and 6s Plus, selecting what smartphone size is right for you all comes down to personal preference.

The smartphone is set to release in black, white or cyan. The Lumia 950 XL and Lumia 950 will sell for $849 CAD and $749 CAD respectively when they’re released in December. It’s unclear whether any Canadian carriers will be picking up the phones at this point.