There's been a general apprehension towards this game, but it's genuinely fun to play 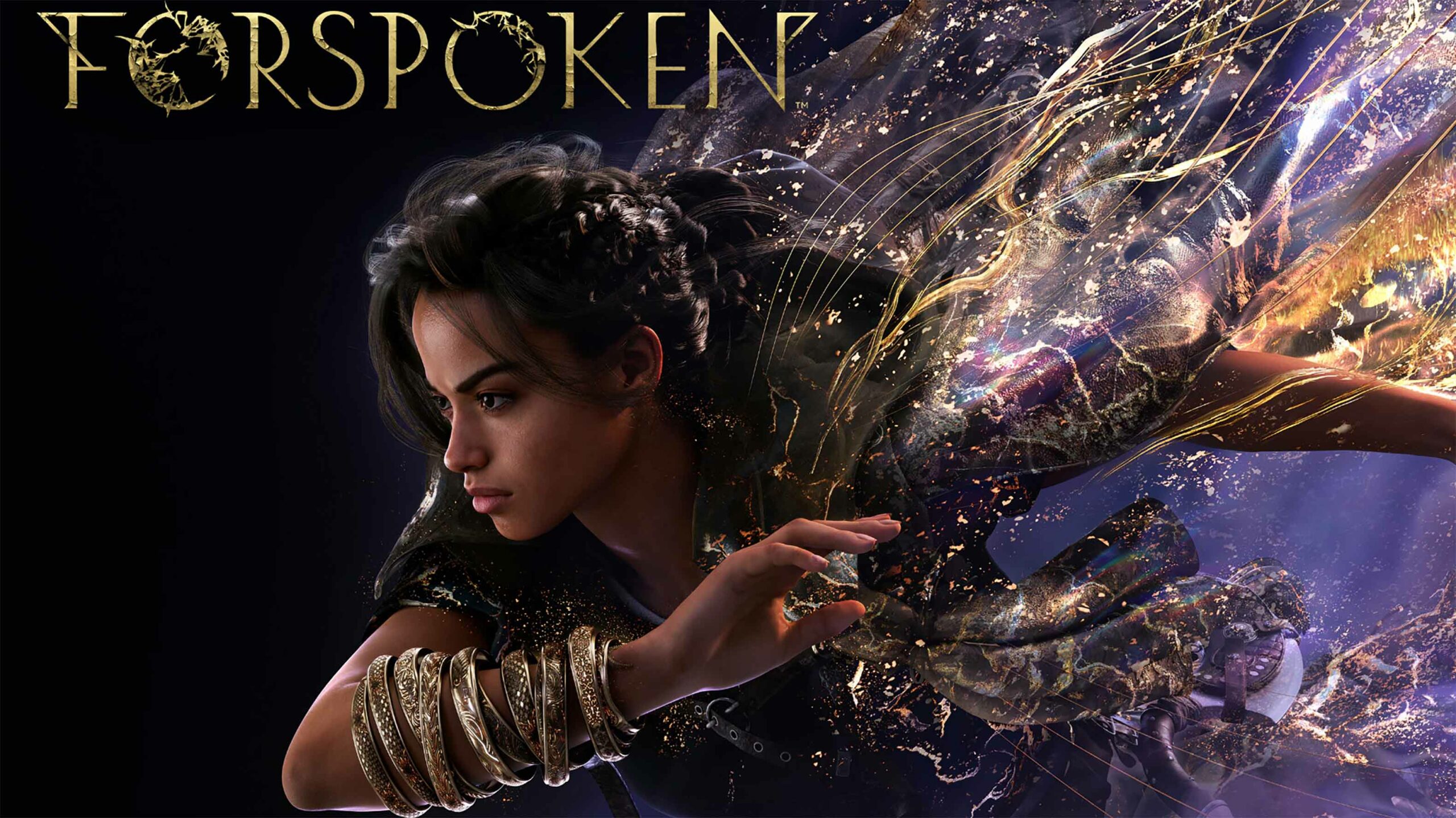 Forspoken is a fascinating game.

It’s developed by Luminous Productions, the Japanese team comprised of many former Final Fantasy XV creators. But the actual story of the game hails from Todd Stashwick (12 Monkeys) and Allison Rymer (Shadowhunters), based on concepts by Gary Whitta (Rogue One: A Star Wars Story) and Amy Hennig (Uncharted series). While this mixture of East and West doesn’t always mesh well, the end result is a uniquely compelling experience with exceptional gameplay and some decent narrative moments.

A diamond in the rough

In Forspoken, you play as Frey Holland (Ella Balinska), a 21-year-old New Yorker who’s struggling to get by. Upon discovering a magical vambrace she calls “Cuff” (Jonathan Cake), she’s whisked away to the mysterious world of Athia, where she must survive the threat of the tyrannical rulers known as the Tantas. Now, much has been made about this Alice in Wonderland-style premise and its awkward juxtaposition of Frey’s quippy ‘Whedonesque’ dialogue and this fantastical setting. It’s at the centre of why this game has basically been the internet’s punching bag.

But I think that’s largely undeserved. Beneath some admittedly clunky and edgy dialogue lies a game with more heart than you’d expect, and that all starts with Frey. Previously hidden from marketing and media previews, the entire first chapter of the game takes some time to explore Frey at rock bottom, revealing her to be a sympathetic character whose abrasiveness in the trailers feels a lot more justified in context. This sets the reluctant hero up on a compelling — and, at times, even emotional — journey to discover her own self-worth. Meanwhile, Cuff’s dulcet English tones and dry humour make for an engaging foil to the rambunctious and insolent Frey, all brought to life through solid performances from Balinska and Cake. Admittedly, some have found this banter grating, so Luminous has thankfully added an option to turn down the frequency of it. I actually mostly enjoyed these snarky exchanges, as they were reminiscent of an early 2000s buddy cop movie and a fun departure from the endearing “road trip between bros” vibes of Final Fantasy XV. My issues instead was that they simply lack variety; after just a few hours, I grew tired of hearing the same lines ad nauseum. 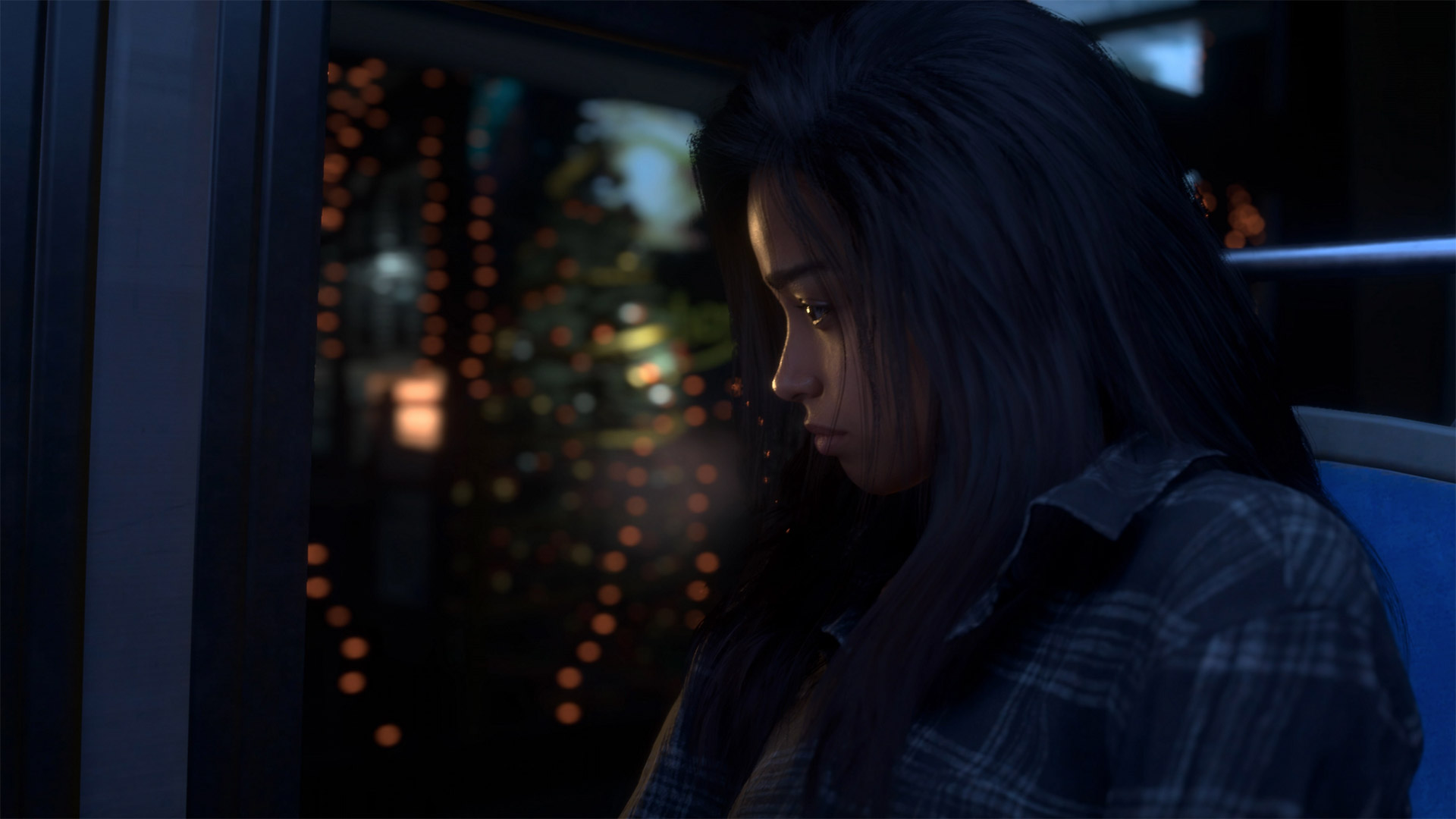 Frey’s attitude makes a lot more sense once you learn more about her tragic backstory.

What only grew on me more over time, however, was Athia itself. When Frey arrives, she finds it in a state of disarray due to a mystical corruption known as the Break. It’s decimated most of the world’s population, turned the wildlife into zombified beasts and forced humanity’s sole survivors to shack up in the bustling city of Cipal. Finding out the cause of the Break and what corrupted the once benevolent Tanta matriarchs proved to be a real highlight, especially towards the latter hours of the game when several revelations are made. I didn’t much care for the supporting cast beyond Frey and Cuff (the game even repeatedly tries and fails to make the death of a girl that Frey meets early on feel impactful), but the actual lore behind everything is rather interesting. You’d be hard-pressed to say any of this is great writing, but it’s definitely a lot better than people might have thought.

But even if the story and characters don’t grab you, Forspoken is absolutely worth playing for its gameplay. At its core, Forspoken is basically a superhero game, and a really engaging one, at that. Through a constantly growing set of powers, controlling Frey becomes a genuine power fantasy.

First, there’s her magical parkour, known as ‘Flow.’ Simply holding down the circle button will cause her to quickly zip forward, maintaining momentum with confident, rhythmic strides as she vaults over low-reaching obstacles like ledges and tree stumps. Over the course of the story, you’ll automatically develop powers that expand her mobility, including the ability to kick off walls for extra verticality, a zipline to quickly reach ledges or launch yourself upward and an ephemeral surfboard to glide across water. There’s also a handful of unlockable moves that further enhance your parkour — my favourite being Shimmy, which lets you stylishly spring off the ground with a well-timed tap of the jump button to maintain momentum. 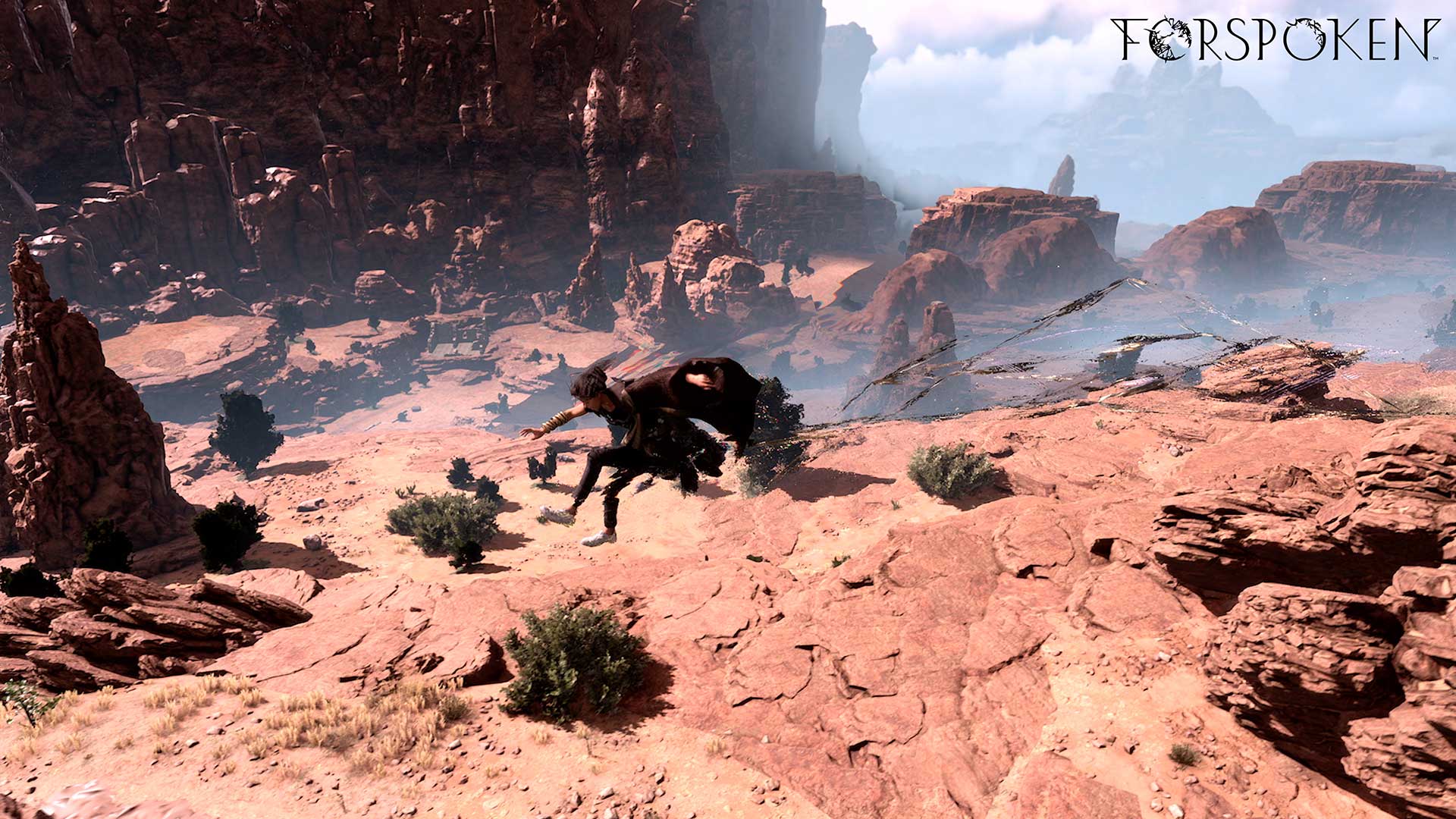 Running and jumping around Athia makes for some stylish entertainment.

All of these abilities work in tandem to create a remarkably fluid traversal system. It’s downright euphoric to bound towards the side of a canyon using Shimmy, parkour up the side of it, swing around a branch with my zipline to launch forward and land and glide over a body of water — all quite seamlessly, no less. The layout of the world is open enough to give you the freedom to reach pretty much anywhere once you have the necessary abilities, but also curated in places — such as through carefully placed floating platforms — to require you to be a bit precise so as to not overshoot your jumps. Through and through, it’s some of the most enjoyment I’ve had on a mechanical level of navigating an open-world since Insomniac’s two Marvel’s Spider-Man games.

The other half of the gameplay equation, combat, is equally rousing. In the lead-up to the game, Luminous has (for)spoken about there being 100 spells for Frey to use. I’ll confess that a part of me was skeptical; surely this is just marketing speak and many of these are palette swaps of one another. But much to my pleasant surprise is the fact that Frey’s magical arsenal is staggeringly diverse. On a base level, she has four different magic types — Purple (rock), Red (fire), Blue (water) and Green (electricity). But the utility of each can vary drastically when you get into all of the underlying abilities. 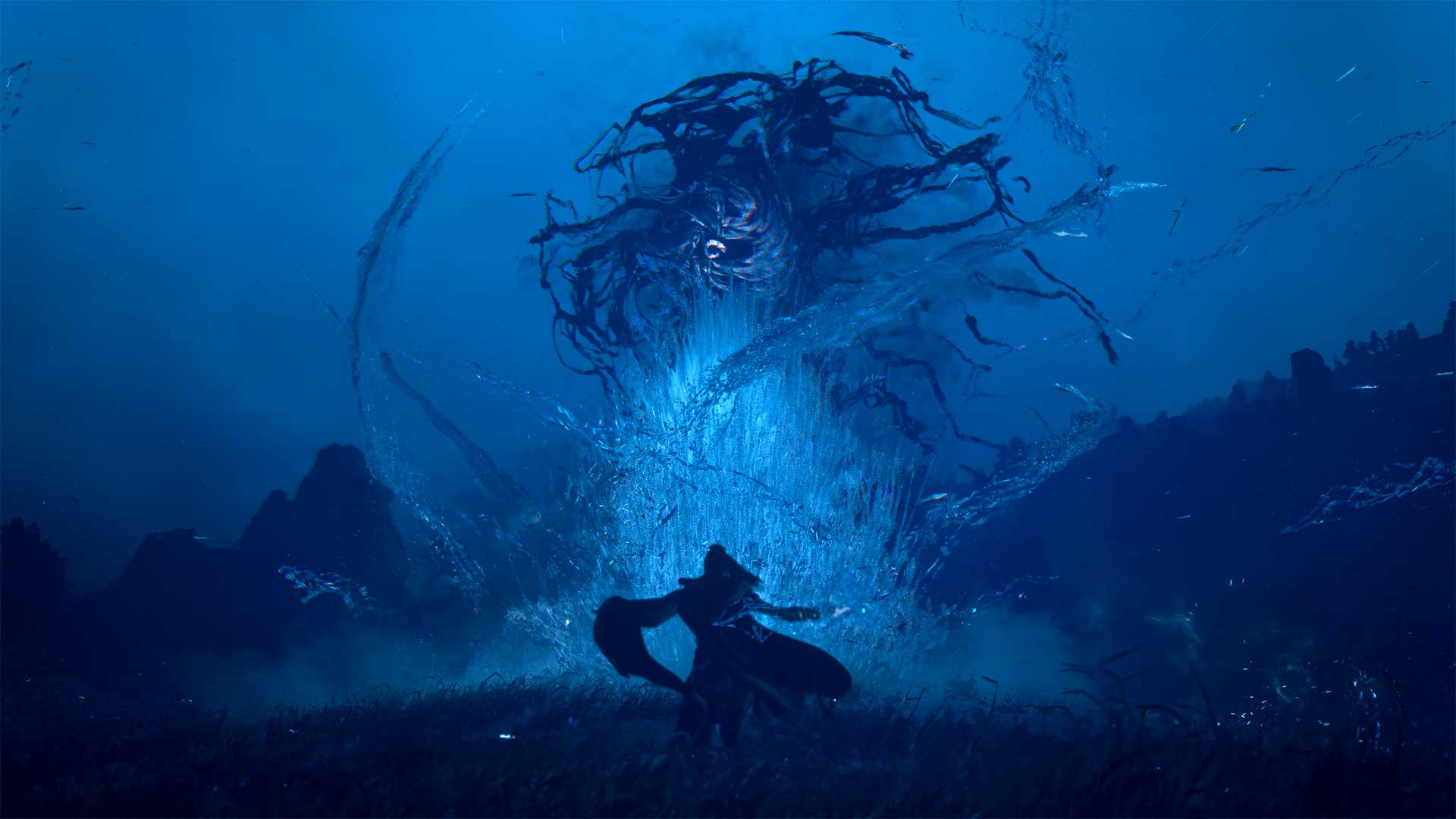 Frey’s powers offer quite the spectacle.

To start, each power has a few different base Attack Magic spells that can be charged into even more moves. Purple Magic’s standard Burst Shot has her blasting enemies with clump of dirt as you mash the shoot button, but you can unlock alternative firing methods that unleash a steady stream of pebbles (Scatter Shot) or a sturdy rock shield to protect you then explode to push enemies back (Shield Shot). Charging Burst Shot, meanwhile, will conjure up a large boulder that can be hurled at enemies to send them flying. Naturally, the use case for each can vary drastically, like carefully aiming your giant rocks to get around enemy shields. That’s to say nothing of the other powers’ base attacks, like Red Magic’s fiery sword for speedy melee attacks, Blue’s exploding balls of aquatic energy or Green’s jolts or electricity.

But it’s her Support abilities that really liven up combat by deviating from being purely elemental-based attacks. For instance, Purple’s powerset includes a Piranha Plant-esque sprout that fires projectiles at an enemy while Green’s Compulsion and Displacement summon floating exploding mines and create an illusory decoy of Frey to distract enemies, respectively. There are also moves that provide Frey with direct buffs, such as Blue’s Inundation to increase the critical hit rate of spells. Each Support ability has its own cooldown timer that can be sped up by using Attack Magic, an effective way to push you to alternate between offensive and defensive magic. To that point, using a mixture of both will charge your a devastating power-specific supermove called Surge Magic. My favourite of these was the Genesis Purple Magic, which calls forth barbed branches to come piercing through the earth to slam crowds of enemies. 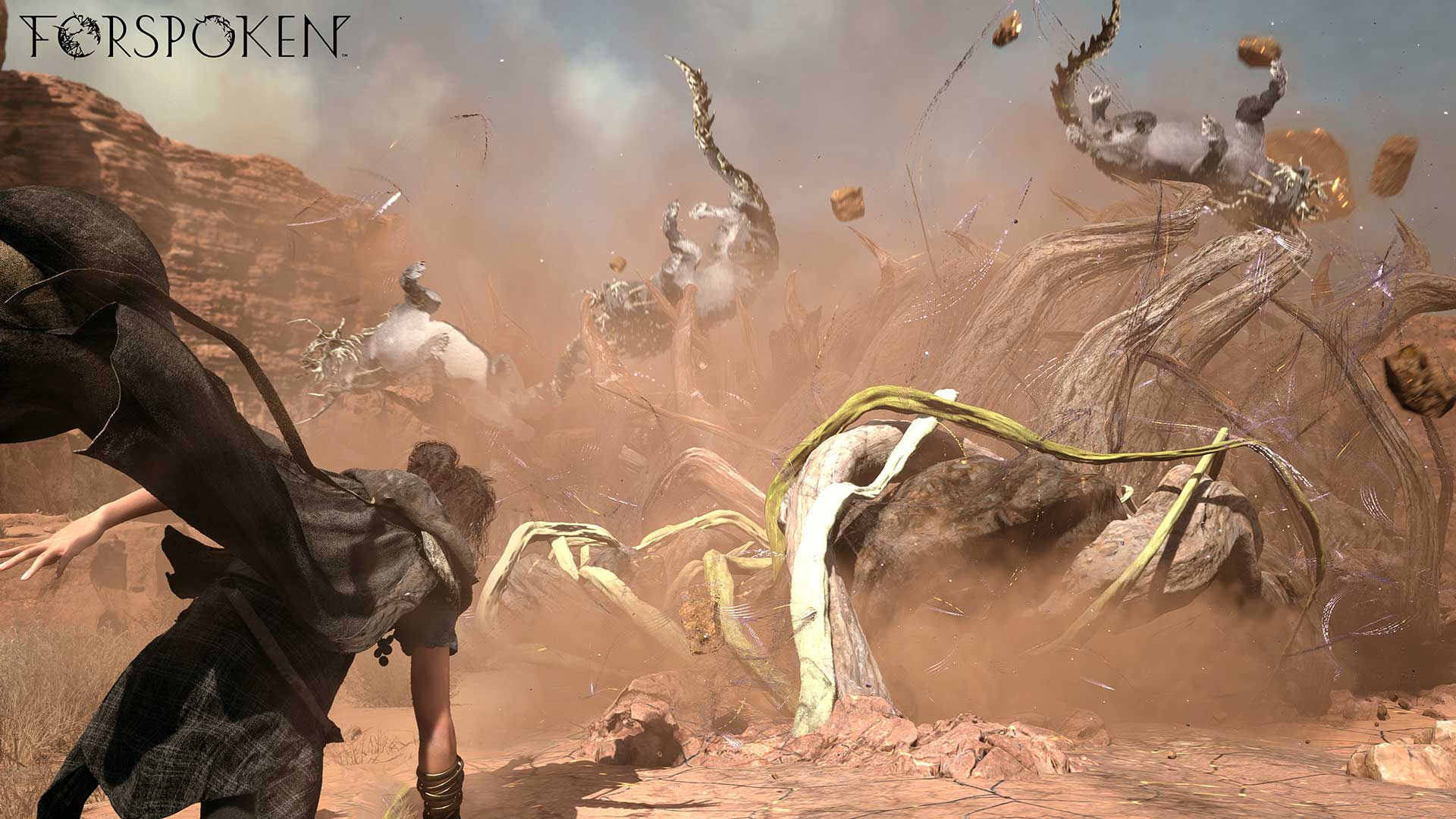 What I most appreciated, though, is that using Mana (acquired by levelling up or finding collectibles on the map) to upgrade Surge Magic doesn’t simply improve their usefulness; you actually see the scope expand. Take Genesis; Level 1 only summons a moderately sized coil of branches, but Level 2’s range dramatically increases and Level 3 is so big that it’s like a giant Poison Ivy-esque outgrowth, venomous bulbs and all. In this way, Frey’s progression actually feels tangible and satisfying besides simply raising behind-the-scenes damage calculators. Upgrading Attack and Support Magic, meanwhile, is handled a bit differently. Here, you’re required to actually use the abilities to increase their usefulness, which I appreciated as a means to get me to experiment more and even play a little differently, like leaping over enemies to attack them from behind to upgrade my flaming sword. A particularly joyful move to discover was Green Magic’s Pulse Dart, which has you puncturing enemies with electric needles in quick succession that effectively paints targets for far more damaging piercing lightning bolts.

In other words, Forspoken‘s combat often has a satisfying brutality to it, enhanced by the spell-specific haptic feedback and adaptive triggers on the PS5’s DualSense controller. What’s more, each spell type is rendered with a dazzling display of particle effects that really sell the raw intensity of Frey’s powers. While the visual splendour definitely takes a hit in Performance Mode, it’s worth the resolution hit to get that consistent 60fps smoothness. An engrossing score from composers Bear McCreary (God of War Ragnarök) and Garry Schyman (BioShock) only further enhances the vibe. 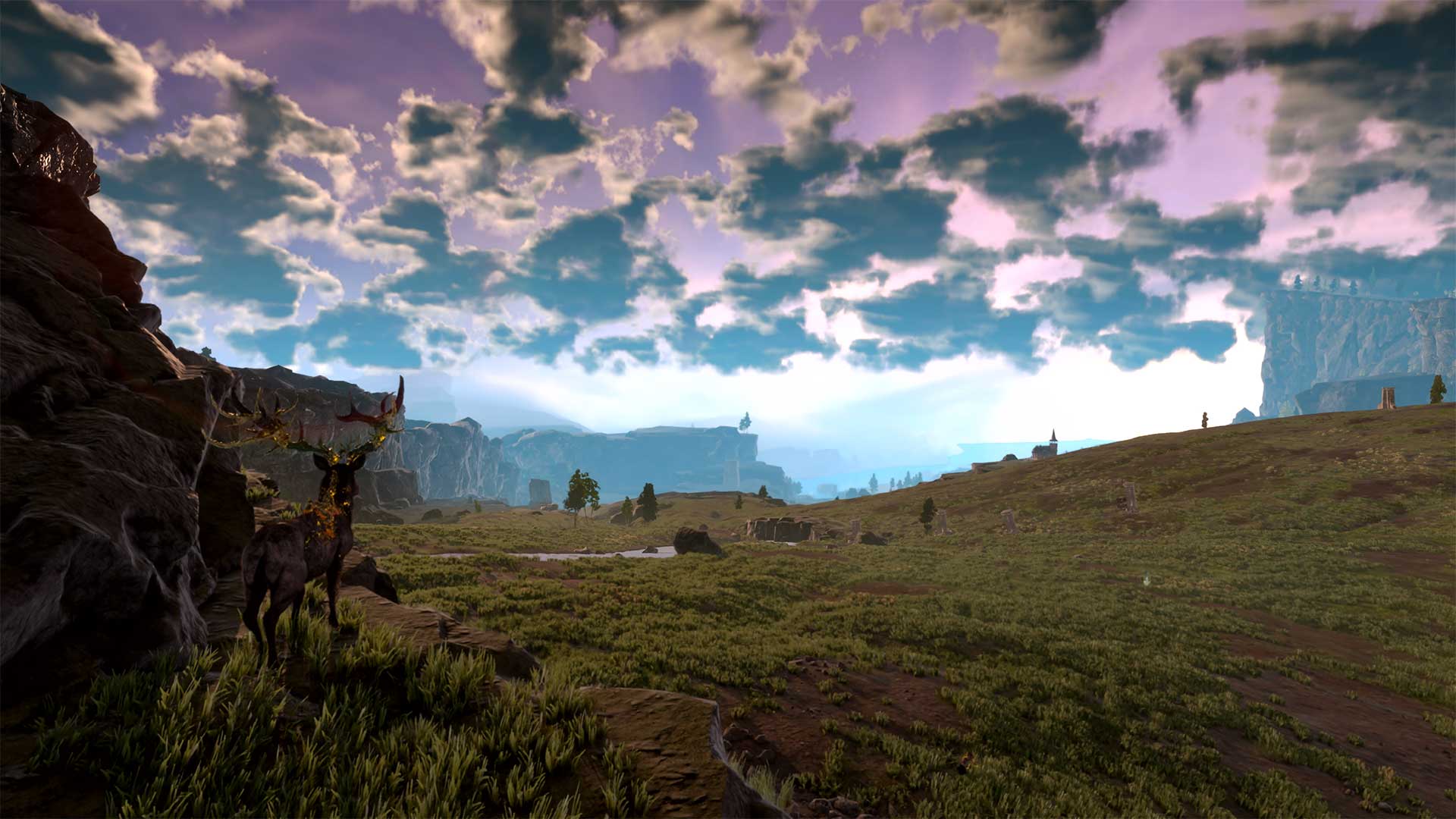 What holds Forspoken‘s gameplay back from true greatness, though, is its open-world. My biggest concern even after playing a three-hour preview in December was that it would be too empty, and that remains true even now. Unfortunately, there just isn’t much to do in Athia’s largely barren outdoor environments beyond the exhilarating parkour. Sure, there’s a bunch of activities littered throughout, but they’re mostly just variations on “defeat these enemies” to unlock rewards. There’s even a spin on the tired map-revealing ‘Ubisoft Towers,’ known here as Belfries, which only further makes Athia’s open-world design feel painfully dated.

Oddly, you’ll exclusively get actual sidequests — referred to as ‘Detours’ — from NPCs in Cipal, and the bulk of these take place within the city. These are at least more interesting and character-driven than the almost purely combat-focused fare in the open-world, but Forspoken still would have benefited from not relegating them all to a single setting. As it stands, though, Forspoken has a lot content for content’s sake, and little of it feels legitimately rewarding to complete. Thankfully, the game only includes two types of gear (cloaks and nail paintings) and you can unlock new equipment and craftable upgrades through these sidequests. With so many games featuring convoluted gear systems nowadays, I appreciated that it was streamlined so you can focus your time on magical parkour and combat — the real highlight of the game — instead of navigating through menus. 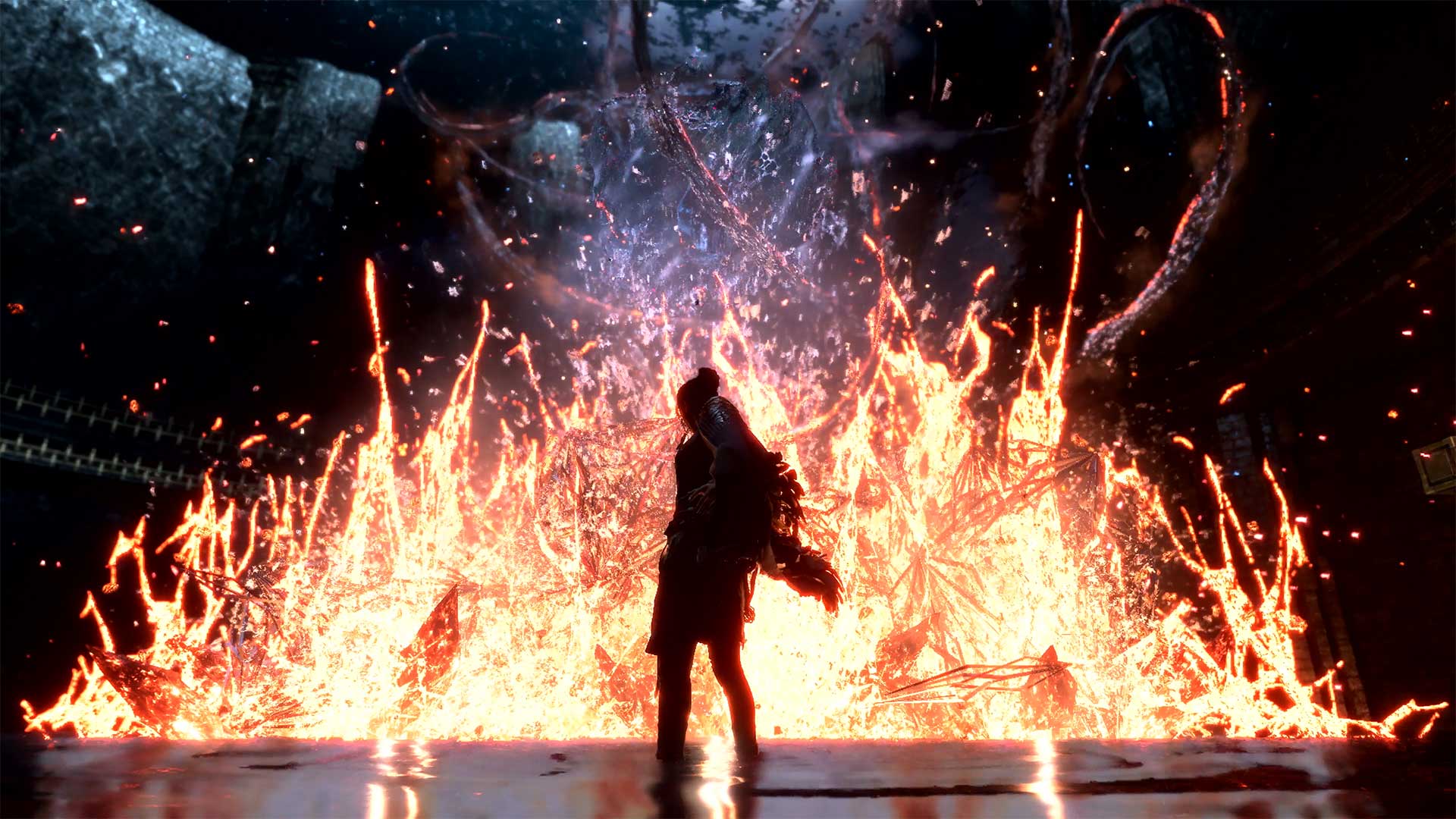 Forspoken is a prime example of why it’s important to go into a game with an open mind. Regardless of how you felt based on admittedly spotty marketing material, there is much to like about the actual experience as a whole. Yes, Forspoken‘s uneven writing and unfortunately lifeless open-world will be off-putting to some, but at the game’s core lies a fundamentally joyful and even euphoric gameplay experience that mixes thrilling traversal with fulfilling, empowering combat. Ultimately, a game should be enjoyable to play, and on that level, Forspoken is certainly worth your time.

Forspoken will launch exclusively on PlayStation 5 and PC on January 24th, 2023.