The Pixel Buds Pro are comfortable and sound great, but unfortunately, that might not be enough to set them apart from the crowd in 2022 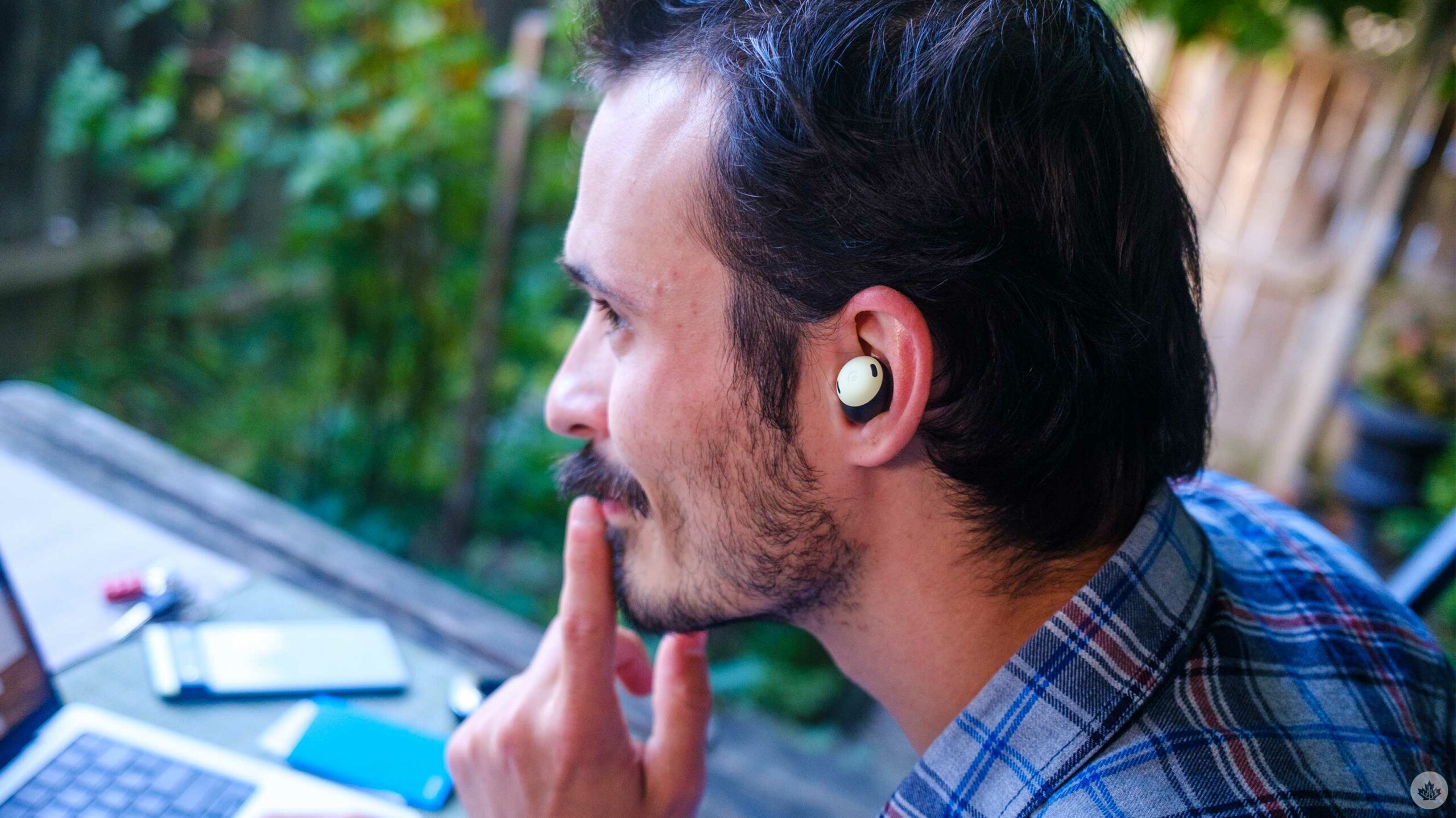 Companies have been cashing in on wireless earbuds for years, but as low-cost buds get better, it’s getting difficult to justify buds that push the price higher than people want to pay.

That’s not to say that Google’s Pixel Buds Pro aren’t extremely solid wireless earbuds, but just that they cost slightly more than I expected – even for high-end earbuds. They’re cheaper than Apple’s AirPods Pro and offer a lot of the same features, but on the Android side, wireless earbuds are often more reasonably priced and there’s fiercer competition.

With this in mind, Google’s latest wireless earbuds don’t stand out as much as they should, but at least the connection seems rock solid compared to the ill-fated Pixel Buds from 2020. 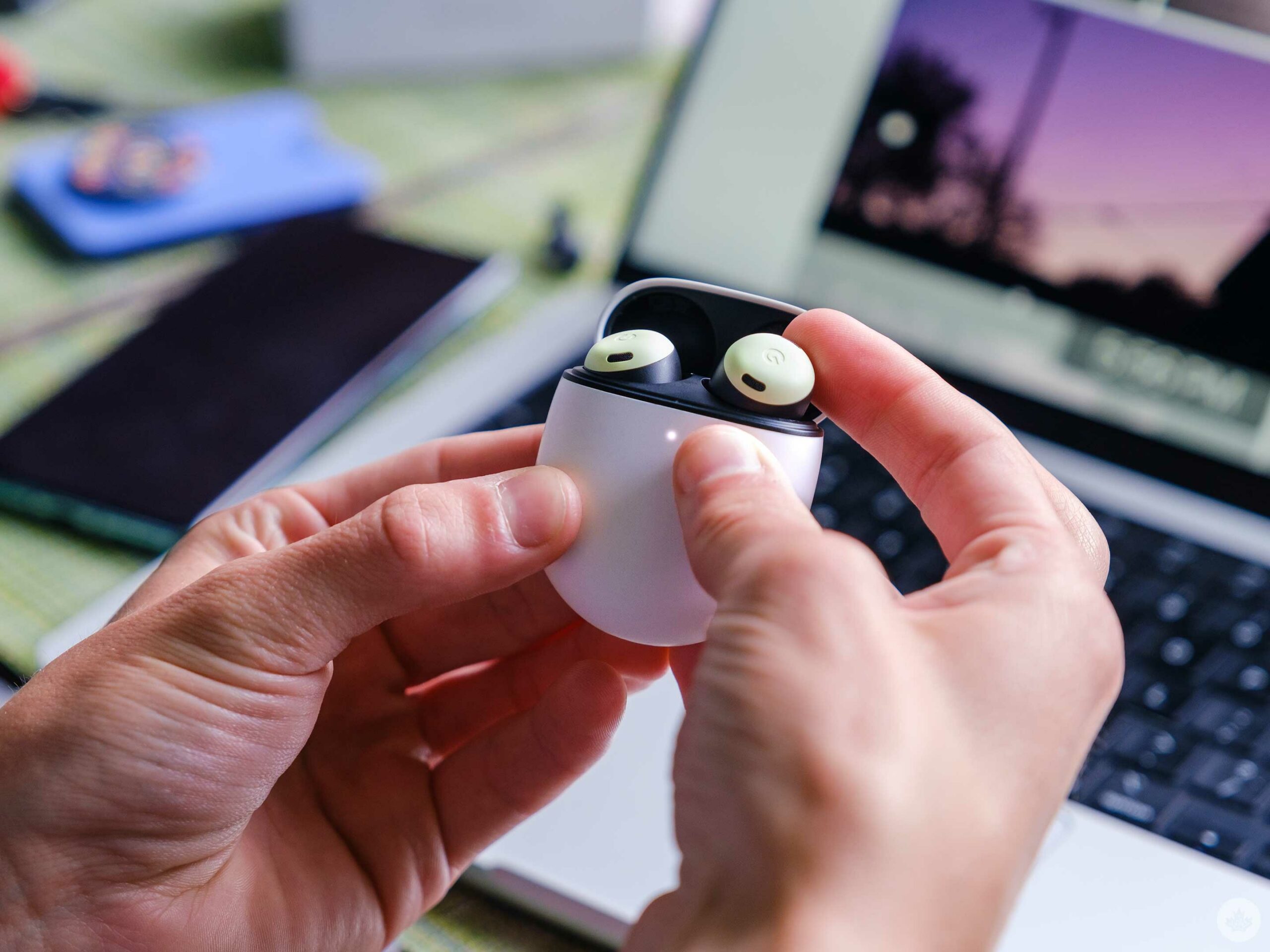 Putting the Pixel Buds Pro through my earbud test tracks was a blast. The sound was full-bodied and offered a soundscape with substantial width, a rarity with most Bluetooth buds.

This is enabled partly through the Pixel Buds Pro’s 11mm speaker driver, which must be tuned well since it sounds quite balanced compared to other Bluetooth earbuds with larger drivers. You can sometimes hear the limitations when the bass is absolutely pounding in a song, but I found the Buds Pro offers great sound quality in most cases. 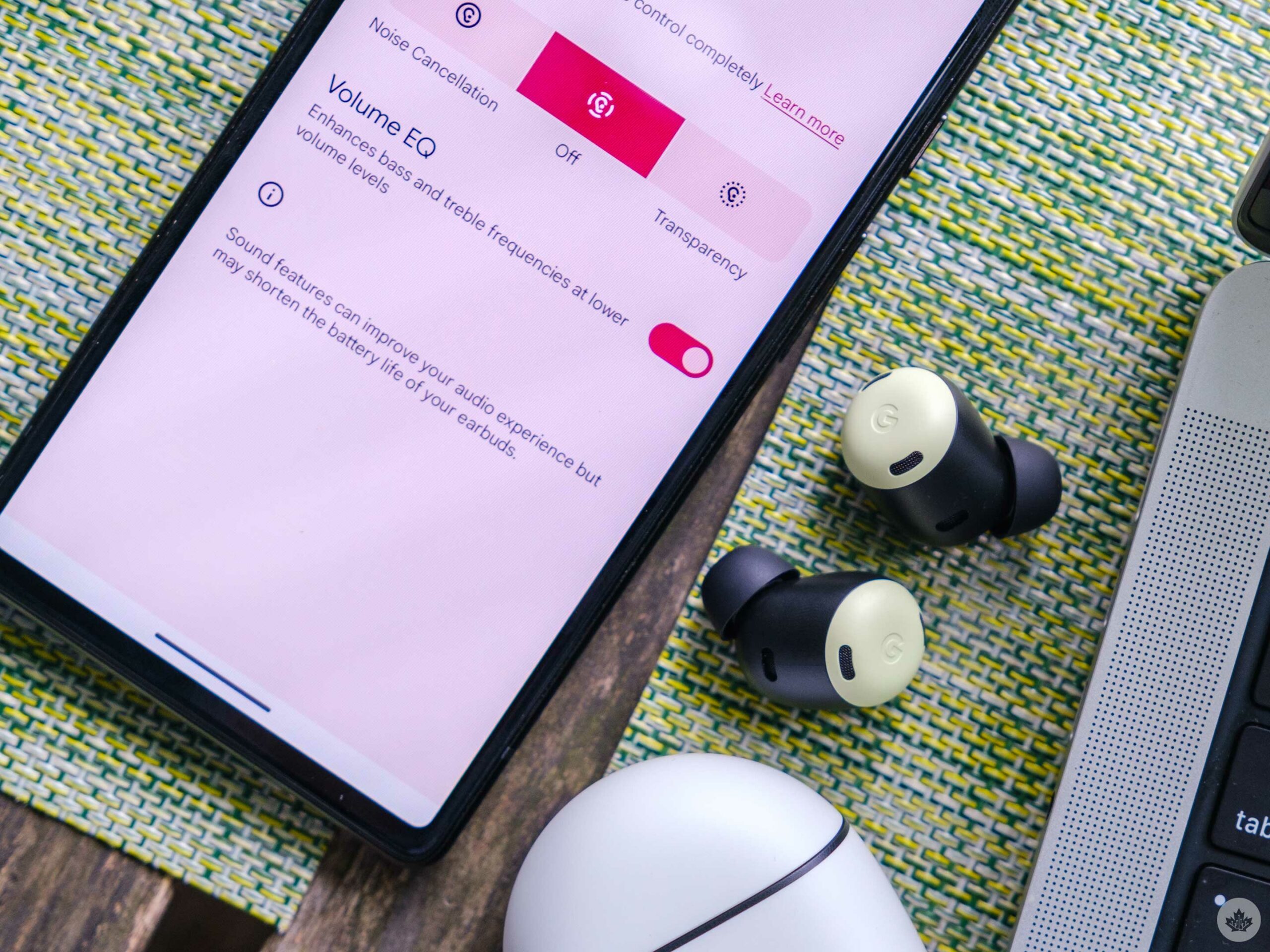 One new addition Google hyped is the Pixel Buds Pro’s new ‘Volume EQ’ feature. The concept is that as you adjust the volume, the Pixel Buds Pro will change their tuning to ensure that the highs, mids and lows maintain a balance. However, this feature is tough to notice in practice. Switching between songs randomly and toggling the functionality on and off offered no noticeable difference. Perhaps that’s part of the magic, or maybe Volume EQ is just overhyped marketing.

Either way, this doesn’t detract from my overall positive experience with the Pixel Buds Pro’s sound quality.

The Bluetooth earbuds’ active noise-cancelling (ANC) is great. It’s not the strongest implementation I’ve encountered, but it’s tuned well enough to keep ambient sound in the background. Google also added new technology called ‘Silent Seal’ that detects pressure in your ears and relieves it when using ANC. I’ve never experienced issues with ANC pressure, but I can feel it with some wireless buds and see how it might wreak havoc on sensitive ears. 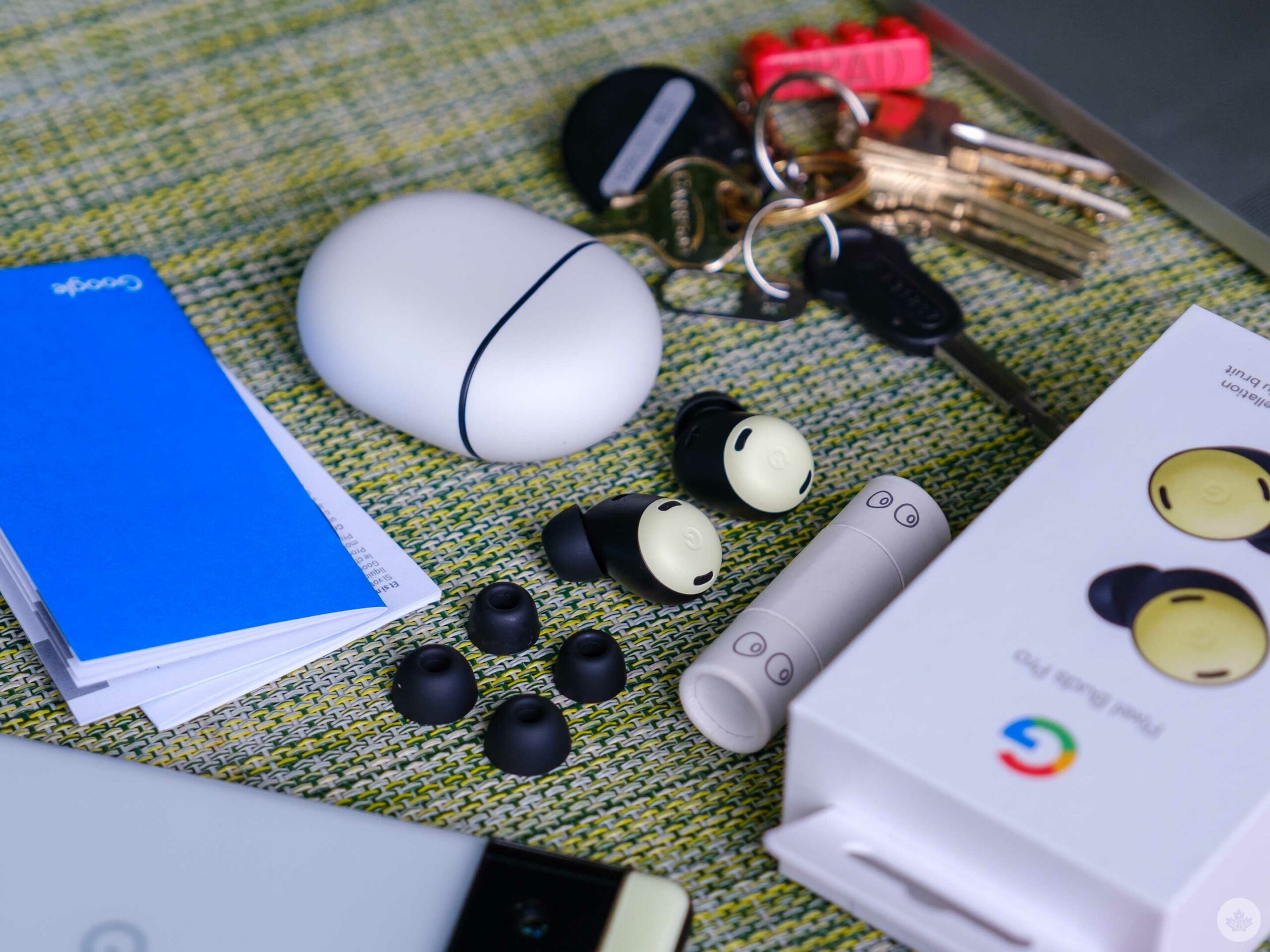 The Pixel Buds Pro doesn’t come with a cable for charging but features a USB-C port.

It’s difficult to judge if the Pixel Buds Pro will solve all the issues some people have with ANC buds, but there’s no denying they’re comfortable. The stemless design fits nicely in my ear, and since it sits flush against my head, they feel secure when I’m biking or running.

Google also added a seal detection method to the Pixel Buds app so you can try out the three different ear tip sizes included with the buds to know for sure what buds best fit your ears.

As the gap between great and decent wireless earbuds continues to shrink, the added features (or gimmicks to some) can help set good wireless buds apart from the pack. Google offers a few features that aren’t related to sound quality, and I’m so far impressed with the extra functionality.

My favourite is multipoint Bluetooth connection with seamless switching. This feature is key to Apple making its AirPods so easy to use, and I’m happy that other manufacturers are finally catching up. That said, the implementation of the Pixel Buds has been hit and miss. They connect to my Mac/Pixel 6 and jump from one to the other, but the audio quality degrades significantly, and the buds struggle to return to normal. Other times I’ll be listening to music on my phone, and the Pixel Buds will disconnect and play a notification sound from my laptop. This only happened a few times, but Google will need to iron out these kinks to truly compete with Apple’s AirPods.

I even tried this on a Chromebook and encountered a similar situation. You also need to sideload the Pixel Buds app since you can’t download it directly from the ChromeOS Play Store.

Other features include hands-free Google Assistant and wireless charging. Both work as expected and are useful to have in your primary pair of earbuds. Each earbud is also rated for 11 hours of playback, but if you’re running ANC and Volume EQ, I found that I’d get a little less than that. Still, it was always enough for most situations. With the two extra charges you can get out of the case, you get a total of 31 hours.

Volume controls are rare to see on wireless earbuds, and it’s even more elusive to see them work well, but somehow, Google has introduced an excellent touch panel on the Pixel Buds Pro. A soft swipe forward on the buds raises the volume a reasonable amount, and a swipe back brings it down. I still found myself accidentally tapping the touch panels when adjusting them, but compared to other earbuds I’ve tested – like the Galaxy Buds 2 — the Buds Pro works great. 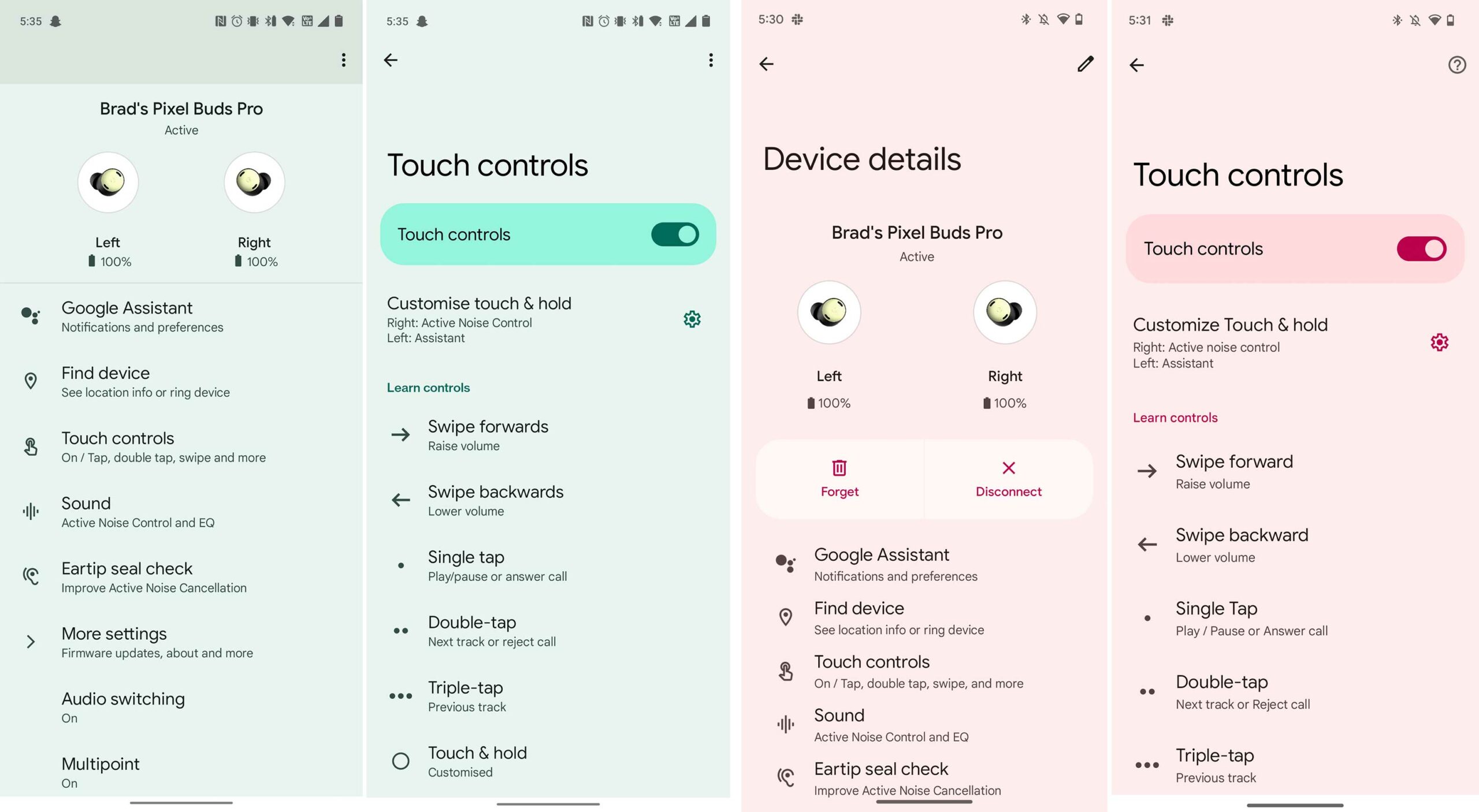 The Pixel Buds app (left/green) and the Pixel Buds device settings on a Google Pixel 6 (right/pink). Both offer the same features and adapt to your device’s wallpaper if your Android device supports it.

Later in the fall, Google says spatial audio will make its way to the Pixel Buds Pro, offering a more immersive listening experience. I’m a big fan of the feature with Apple’s AirPods, so hopefully, Google and YouTube Music combine forces to make spatial audio on Android an even more compelling feature. 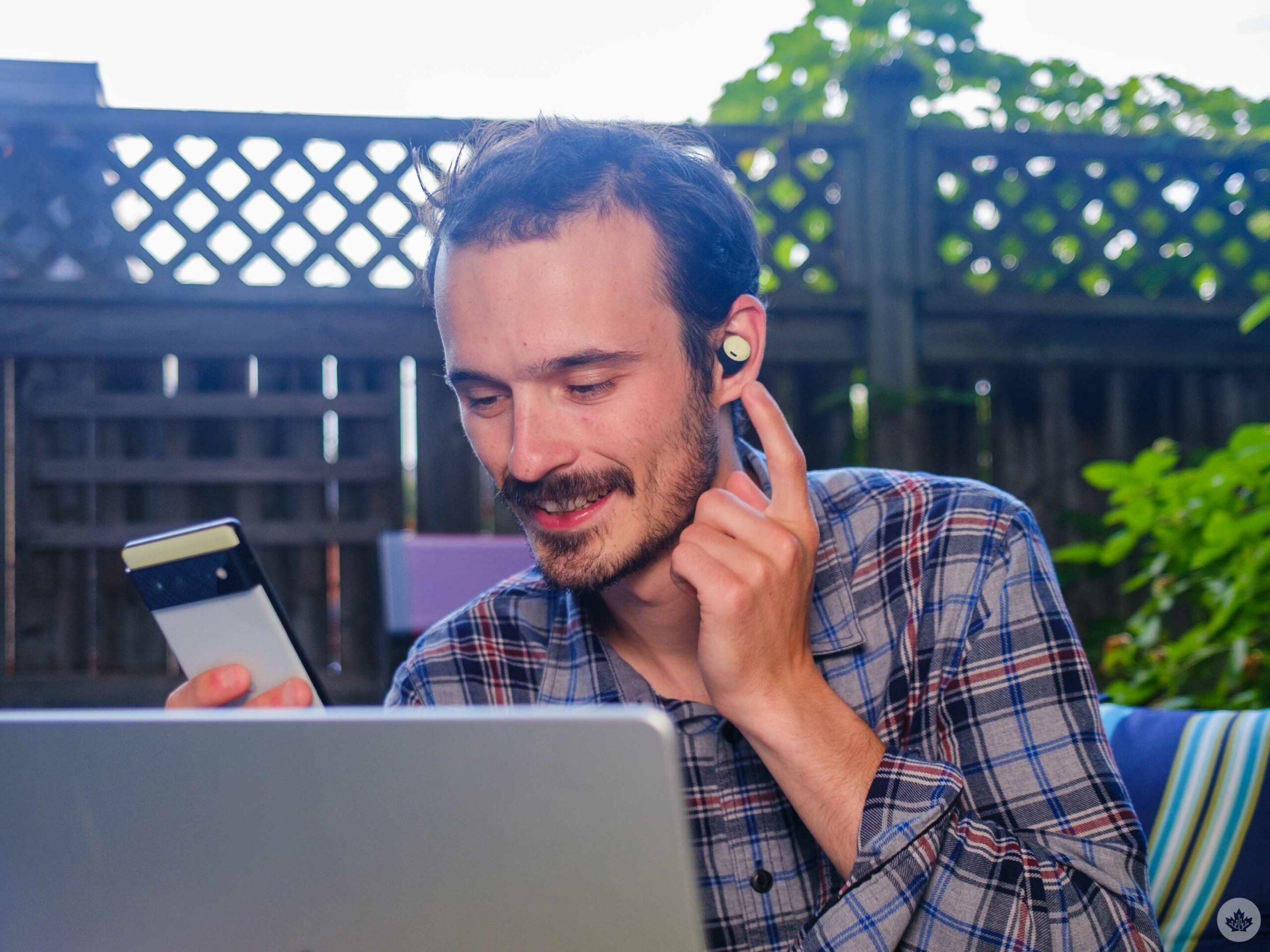 I also tested out the conversational Google translate feature, which works as advertised, but you still need to have your phone nearby and manually switch when different people are talking (even if it’s just two people). It works, but if I were travelling and needed to use translate in a pinch, I would just use a smartphone since the earbuds make the experience slower and more cumbersome.

Finally, the buds are IPX4 water resistant, so they should be able to withstand a bit of rain, but I wouldn’t take them white water rafting or get them soaked.

Overall, the Pixel Buds Pro microphone is on par with the rest of the crowd. From what I’ve been able to gather in my tests, Google has added EQ boosting tech that allows audio to be louder, but not necessarily better than the competition. It’s not a perfect mic, but for the occasional phone call or online meeting, the Pixel Buds Pro get the job done.

I still find that holding a phone up to your face in loud environments sounds better, but in a quiet room, the Pixel Buds Pro mic is more than enough for what I expect most people to be using them for.

You can watch a video and listen to the Pixel Buds Pro, AirPods, OnePlus Buds Pro and Galaxy Buds 2 above.

Overall, I’ve enjoyed my time with Google’s Pixel Buds Pro. They’re comfortable, sound good and offer solid battery life. If I was looking for a pair of perfect do-everything buds, these would be high on my list since they offer great noise-cancelling, a decent mic and are very comfortable.

Since I like to bike a lot, the AirPods with spatial audio are still high on my list since they make it easier to hear the outside world than other earbuds of that calibre.

Regarding direct competition, the Pixel buds Pro stand firmly against the OnePlus Buds Pro that I reviewed positively back when they were released in September of 2021. I’d likely buy the OnePlus Buds myself since I think Zen mode is such an interesting feature, but if you‘re a Pixel user already, the Pixel Buds Pro will mesh with your phone quite well. Other smartphones need to use an app and iPhone users are extremely limited while using them without an app to remap controls or enable features like Volume EQ.

You can buy the Google Pixel Buds Pro from Google for $259. They’re available in ‘Charcoal,’ ‘Fog’ and ‘Lemongrass.’

"If I was looking for a pair of perfect do-everything buds, these would be high on my list since they offer great noise-cancelling, a decent mic and are very comfortable"