A closer look at the Samsung Galaxy S22 Ultra’s ‘Nightography’ 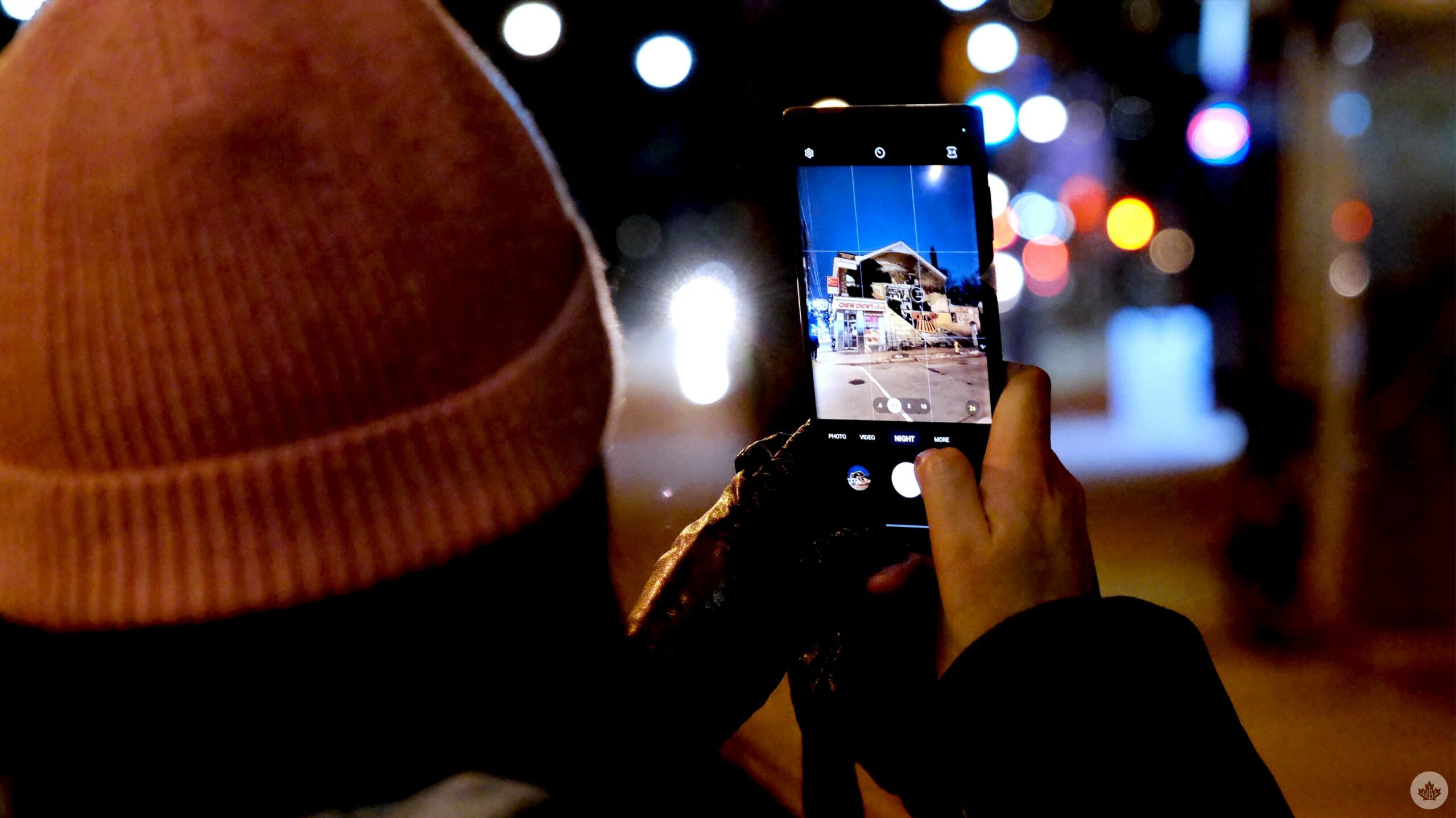 Samsung is pushing low-light photography as one of the defining features of the S22 series, so I took the S22 Ultra out during the night to test it out.

Since Samsung forced an S22 Ultra on me, I compared its photography capabilities to my iPhone 13 Pro. That being said, Samsung is also hyping up low-light photography on the S22 series in general.

Regardless, both companies are hyping up their ‘Nightography’ chops, so they seem like the top two low-light champions out in early 2022.

What makes the S22 Ultra’s camera better at night?

Samsung has packed several software and hardware improvements to its flagship this year. A new lens stabilization mechanic, anti-reflective lenses and better software come together to take stunning night shots.

Samsung claims ‘Nightography’ works to its fullest potential on the selfie camera, the primary 108-megapixel lens and the 3x zoom lens. However, you can use the phone’s Night mode, which takes a longer exposure on all of the included lenses. Even though Samsung markets the main lens as a 108-megapixel shooter, during most shooting experiences, it pixel bins itself down to become a 12-megapixel camera. In Night mode, the sensor is locked to 12-megapixels to allow for more light.

This all appears to be working well, and in some cases, it’s even a little ahead of the iPhone 13 Pro. In many examples, I preferred the magenta balancing of the Samsung and found its colours to be more true to life.

Throughout the following tests, Alex and I had the S22 Ultra in Night mode and we also made sure the iPhone’s Night mode was set to auto. 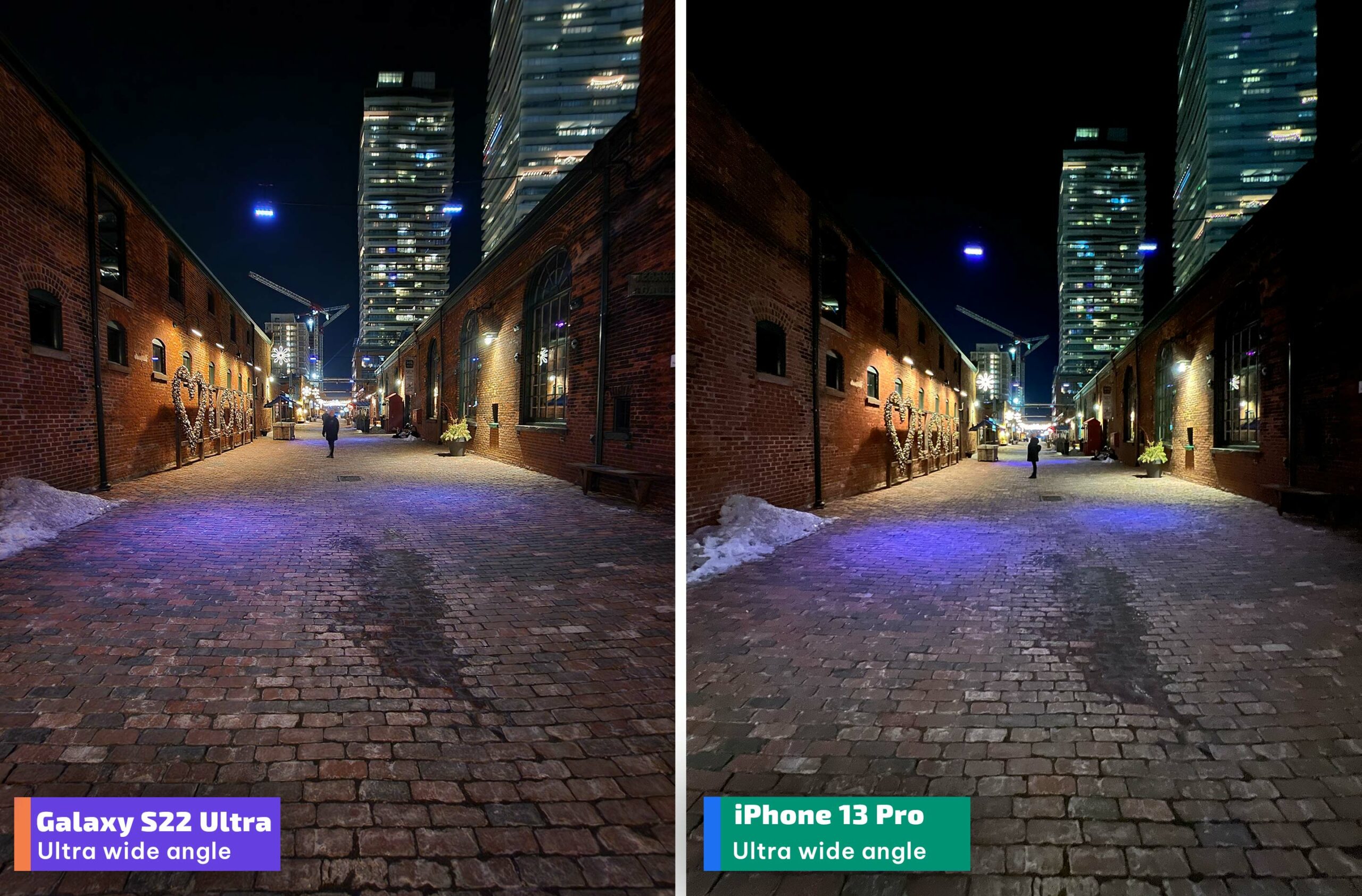 This shot actually led me to dig a little deeper on the two ultra-wide lenses. The Galaxy S22’s camera interface says that this lens is 0.6 of a zoom out, compared to the main lens. On the iPhone, it only pulls out 0.5 times. However, both lenses are 13mm equivalent focal lengths.

This isn’t to say Samsung is lying, however. Since its main lens has a different focal length than the iPhone, it pulls out 0.6 times, but it feels like an excellent example of Samsung using innovative thinking to make it appear that their phones may have the upper hand over competitors.

Overall, it’s sometimes exhausting to parse through all the advertising terms to get to the facts. I wish we would normalize using focal lengths in phone cameras. I think we’re close — let’s just do it. #MakeNightsEpic, right Samsung? 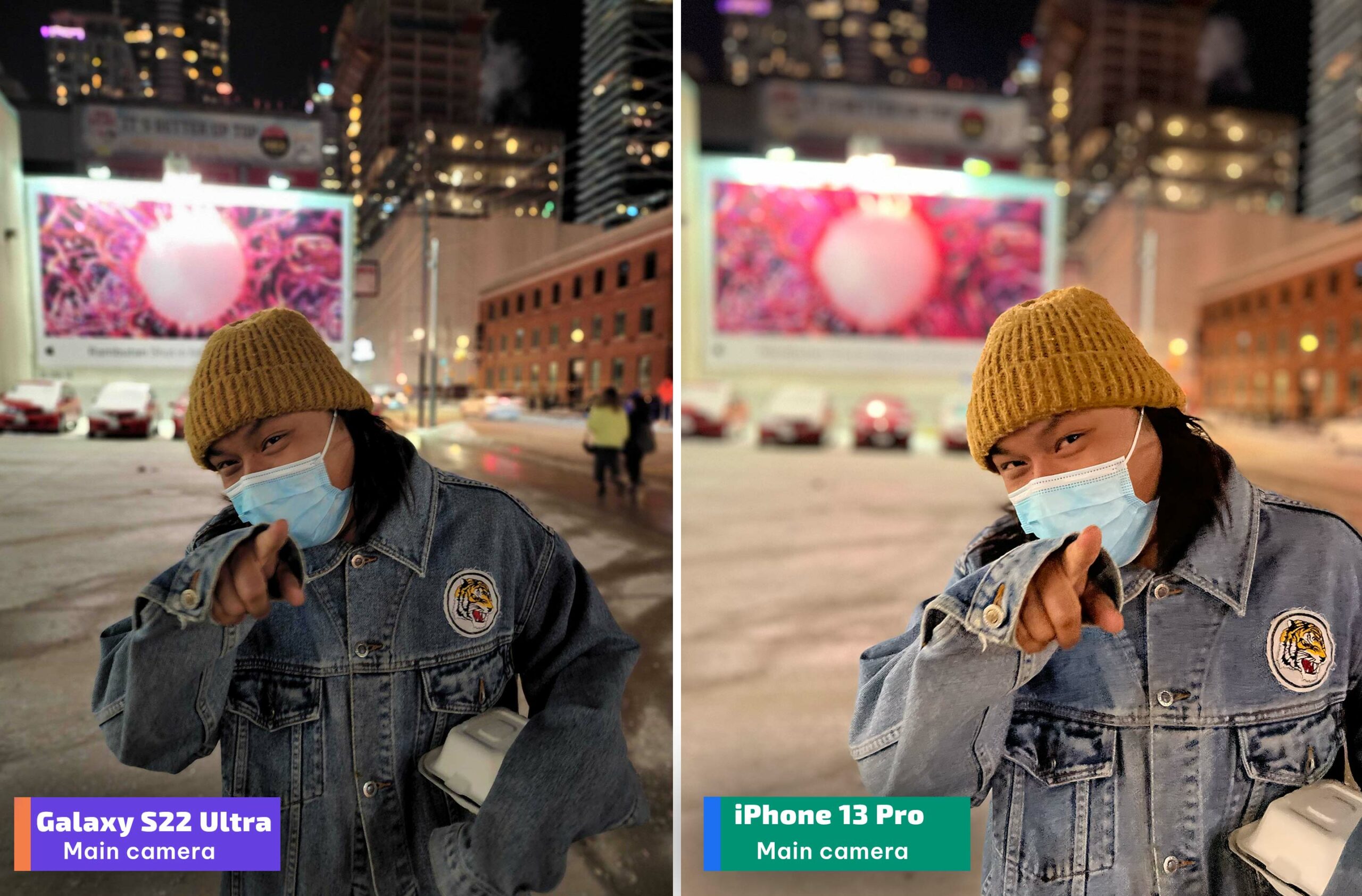 This second shot was one of the few where the phones actually gave me pretty different results. For instance, Samsung went with a shorter shutter time. This means that less light came into the photo, but there is more detail preserved in joes jacket because of it. The iPhone made his face pop more, but we lose that beautiful jean texture in his jacket.

The Galaxy S22 Ultra does a better job of maintaining the real black levels in the scene and the realistic tones of the background. Of the two images, the Samsung had a better white balance.

This example illustrates that the iPhone 13 Pro’s 26mm equivalent lens does punch in a bit more than the Samsung’s 23mm equivalent shooter. I like the iPhone’s tighter composition a bit better since that slightly higher zoom allows for more believable depth-of-field, which is what we’re all after right? However, there’s no denying that the S22 Ultra’s wider composition is still very appealing. and both fake blurs, when adjusted appropriately, can look great.

Plus, both cameras can use Portrait mode with the zoom lens for even more blurred-out backgrounds. 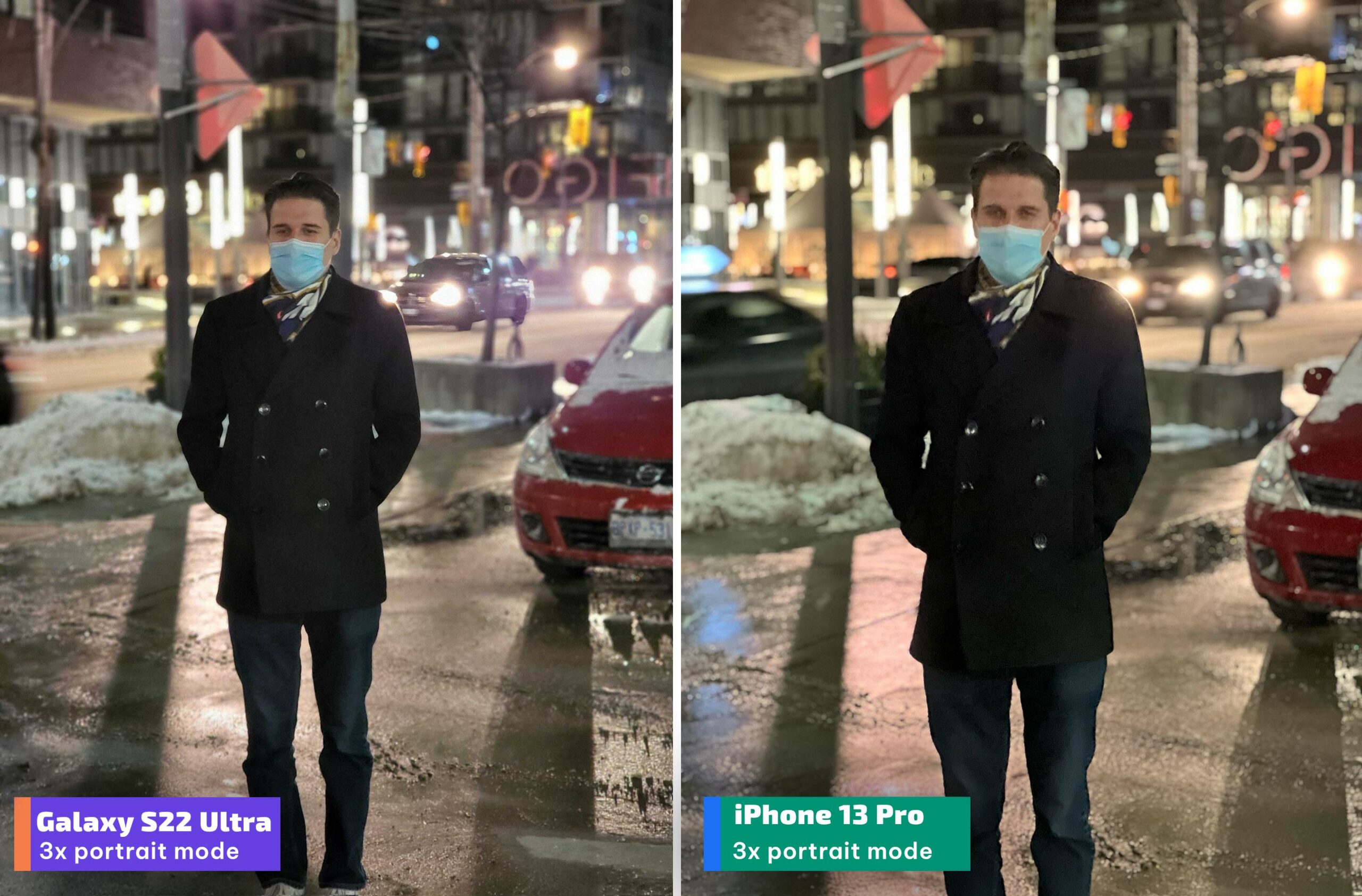 … or at least I thought.

While more blur did appear when the phones were in their 3x zoom modes, the quality of both photos suffered. Samsung produced a decent image, and looking at it on a smartphone, it looks great. The iPhone — not so much. But compared to the 1x zoom lens, low-light with the zoom and portrait mode seems considerably tougher for mobile sensors.

However, with a bit more light involved, the results change dramatically. 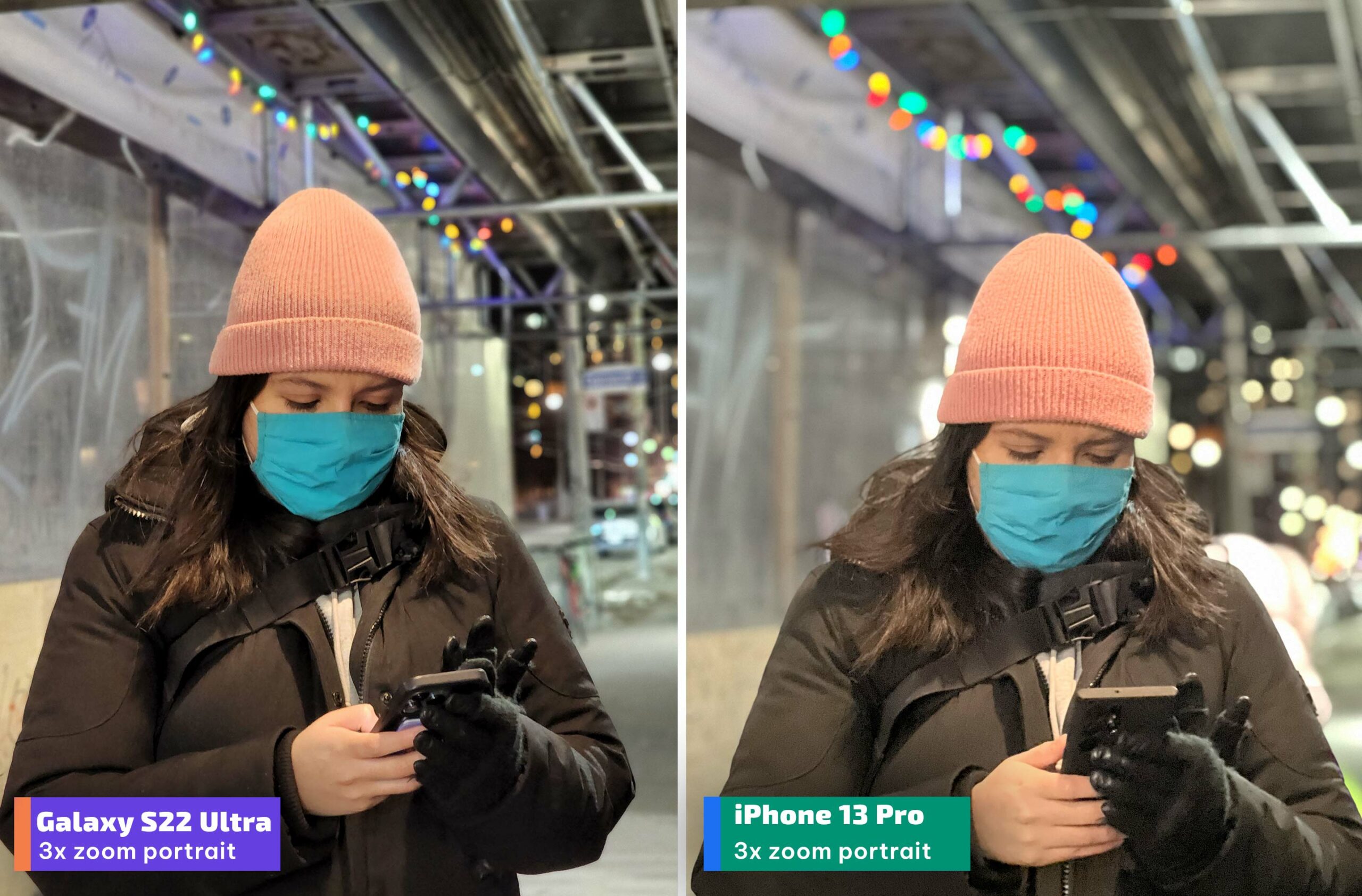 In this well-lit construction tunnel, both photos turned out a lot better. Samsung has Alex in sharper focus and with less grain, but the iPhone really blew us away with its bokeh balls. I’ll also mention that for most portrait mode shoots, I keep the blur levels down to a minimum to help it look more natural. 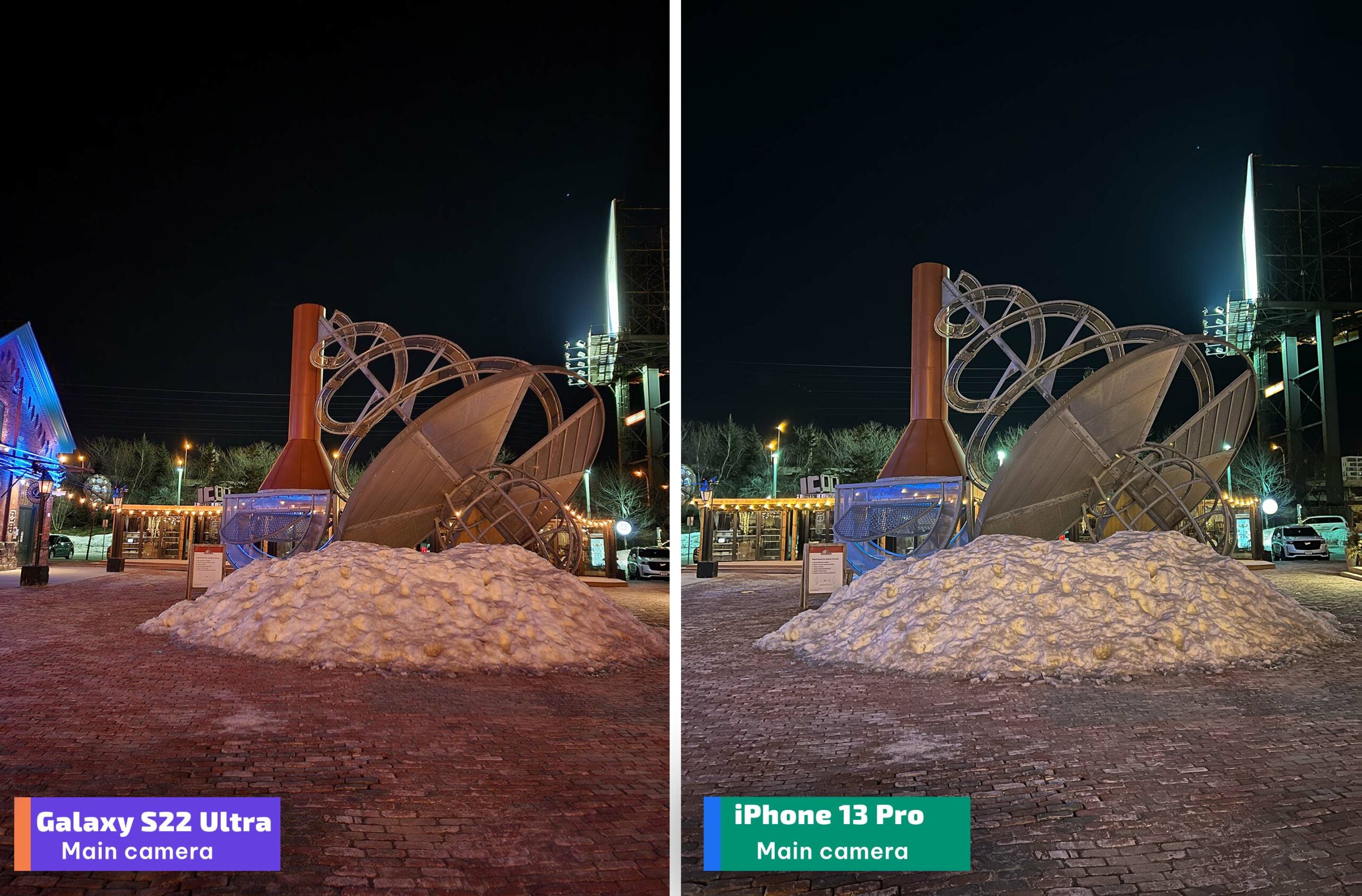 Moving back over to the main camera, we’ve got a pretty standard shot of an art installation in Toronto’s Distillery District. This section was a bit removed from the lit pathways and did appear much darker in person than it does in either photo.

Both phones did an exceptional job here, except the iPhone’s camera once again leaned very green. The brick pathways aren’t quite as red as the S22 Ultra makes them out to be, but it’s way closer. 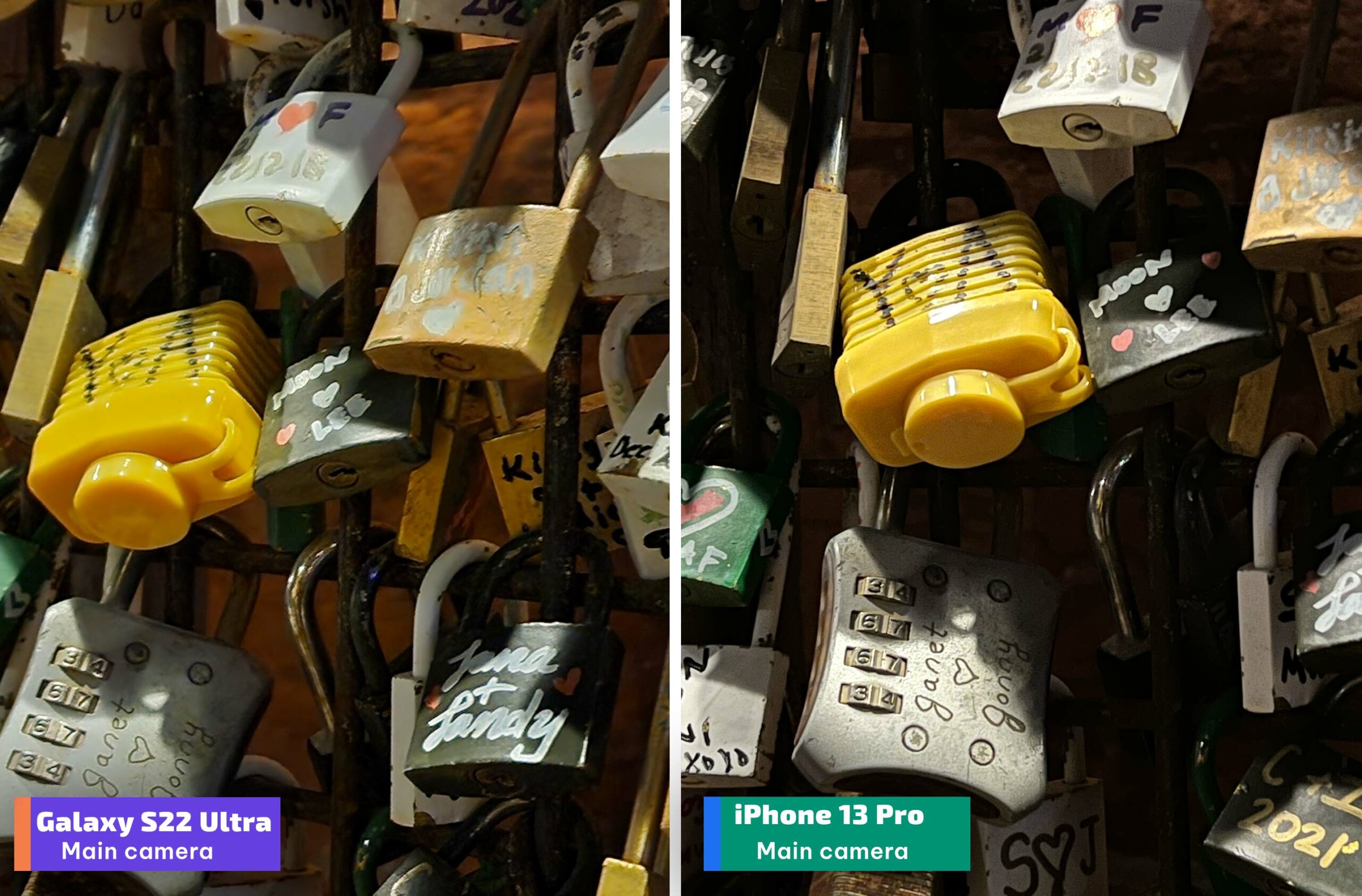 Both of these shots were also in a very dimly lit area and turned out very crisp. The S22 Ultra’s algorithm is doing some pretty intense smoothing and takes away a lot of the roughness on the combination lock in the bottom left, but overall, it brings more light out of the background. 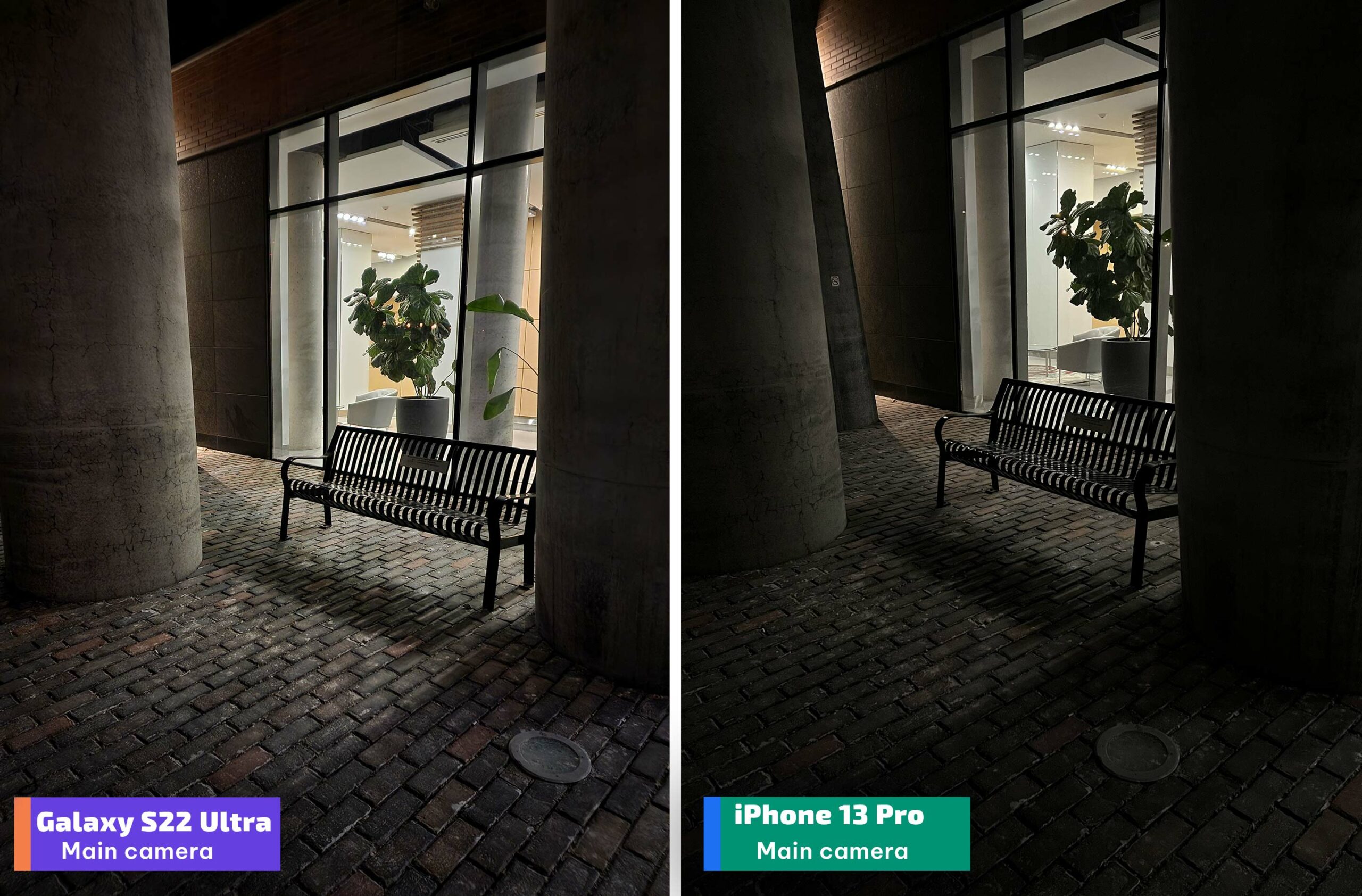 Once again, in a face-off between the main cameras, the S22 Ultra image is a lot brighter and really pops. 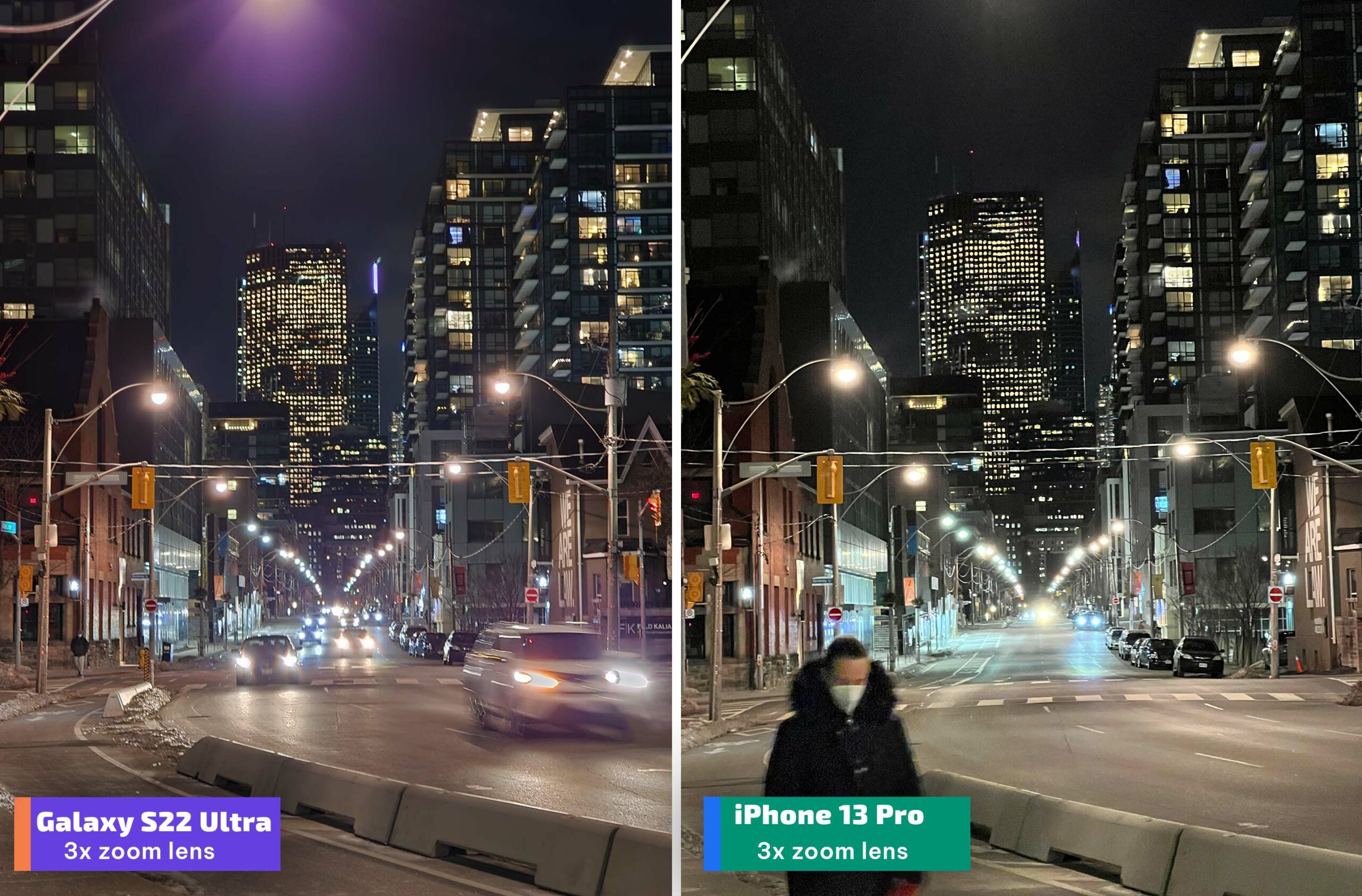 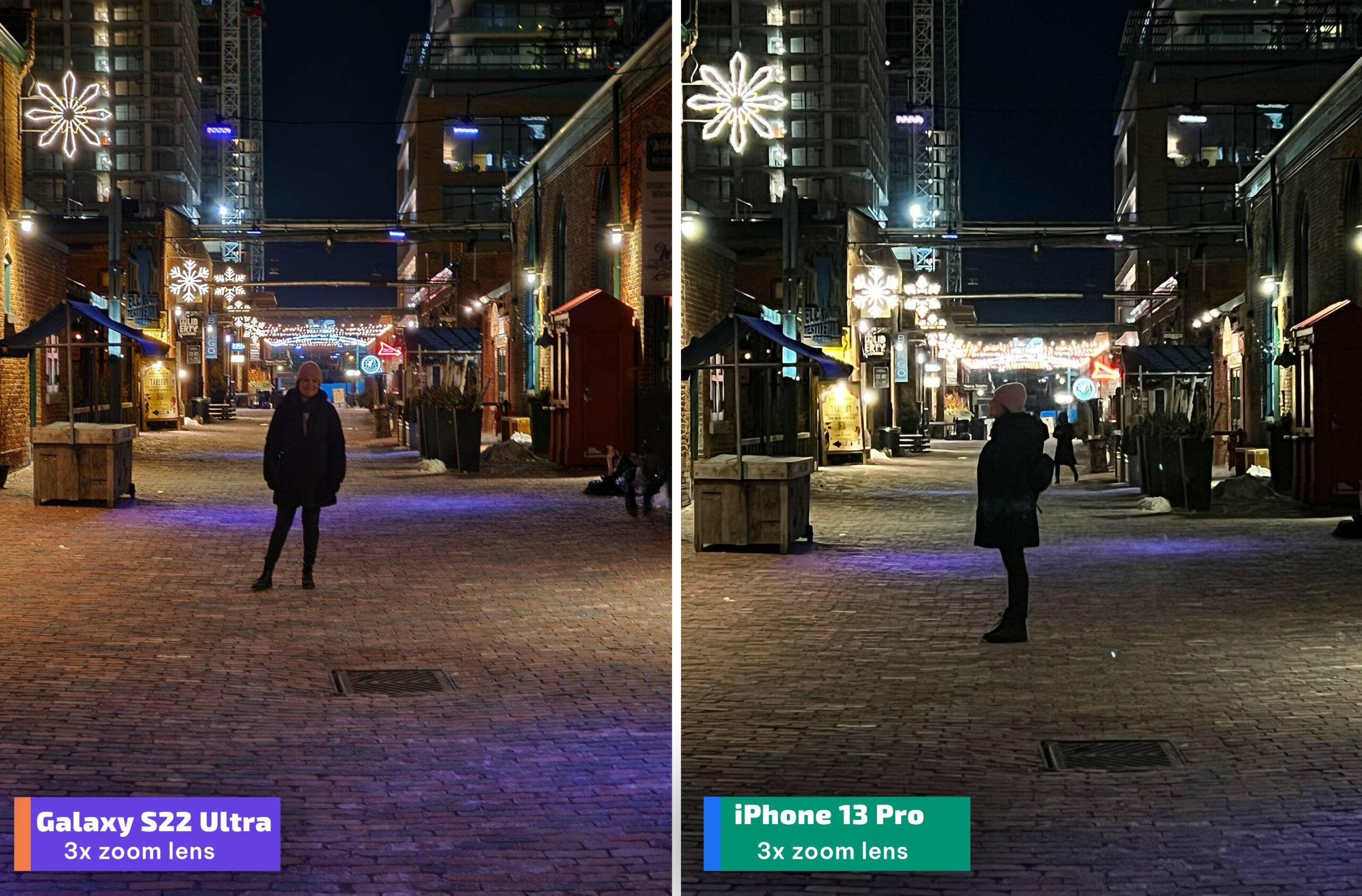 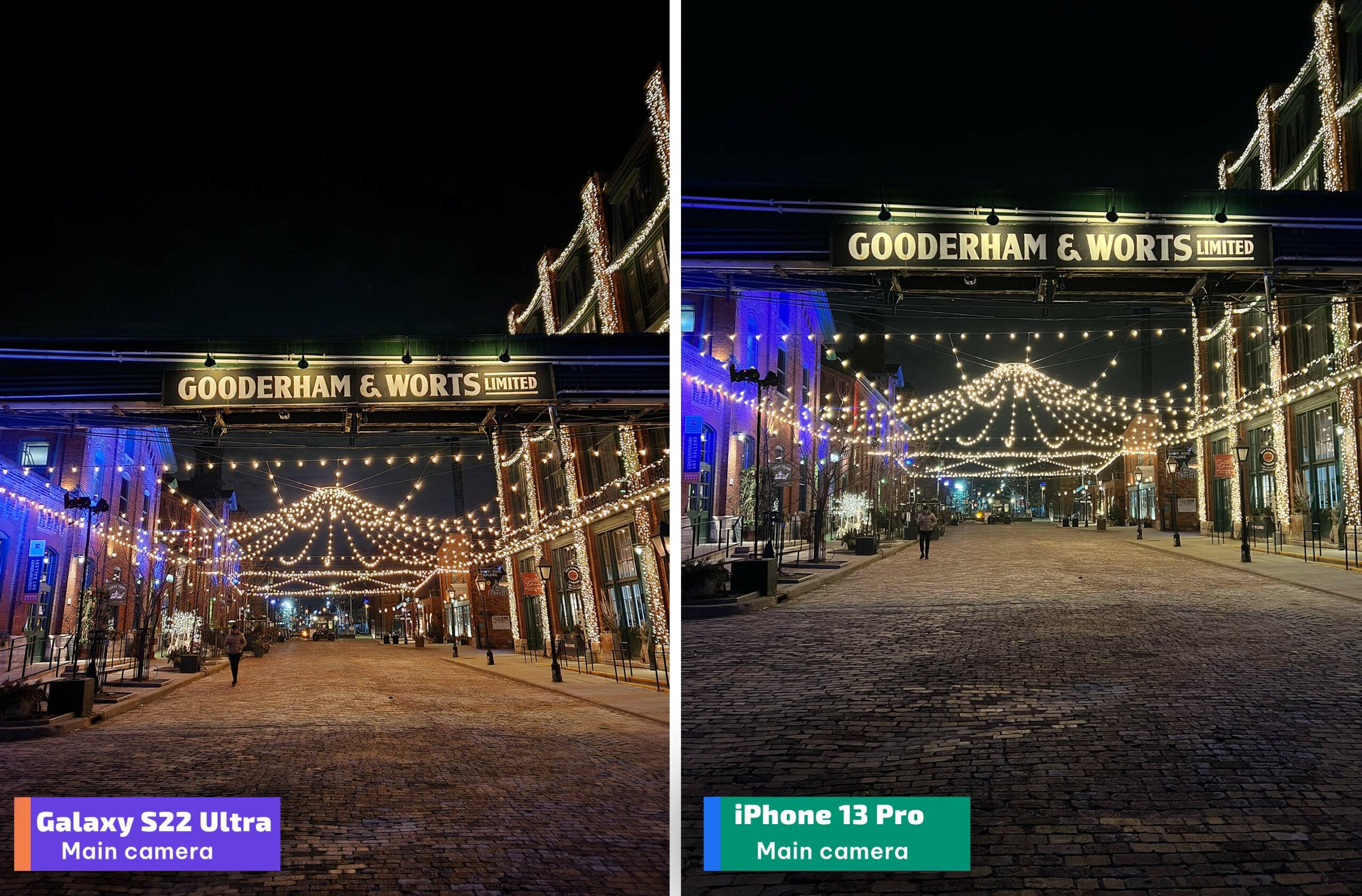 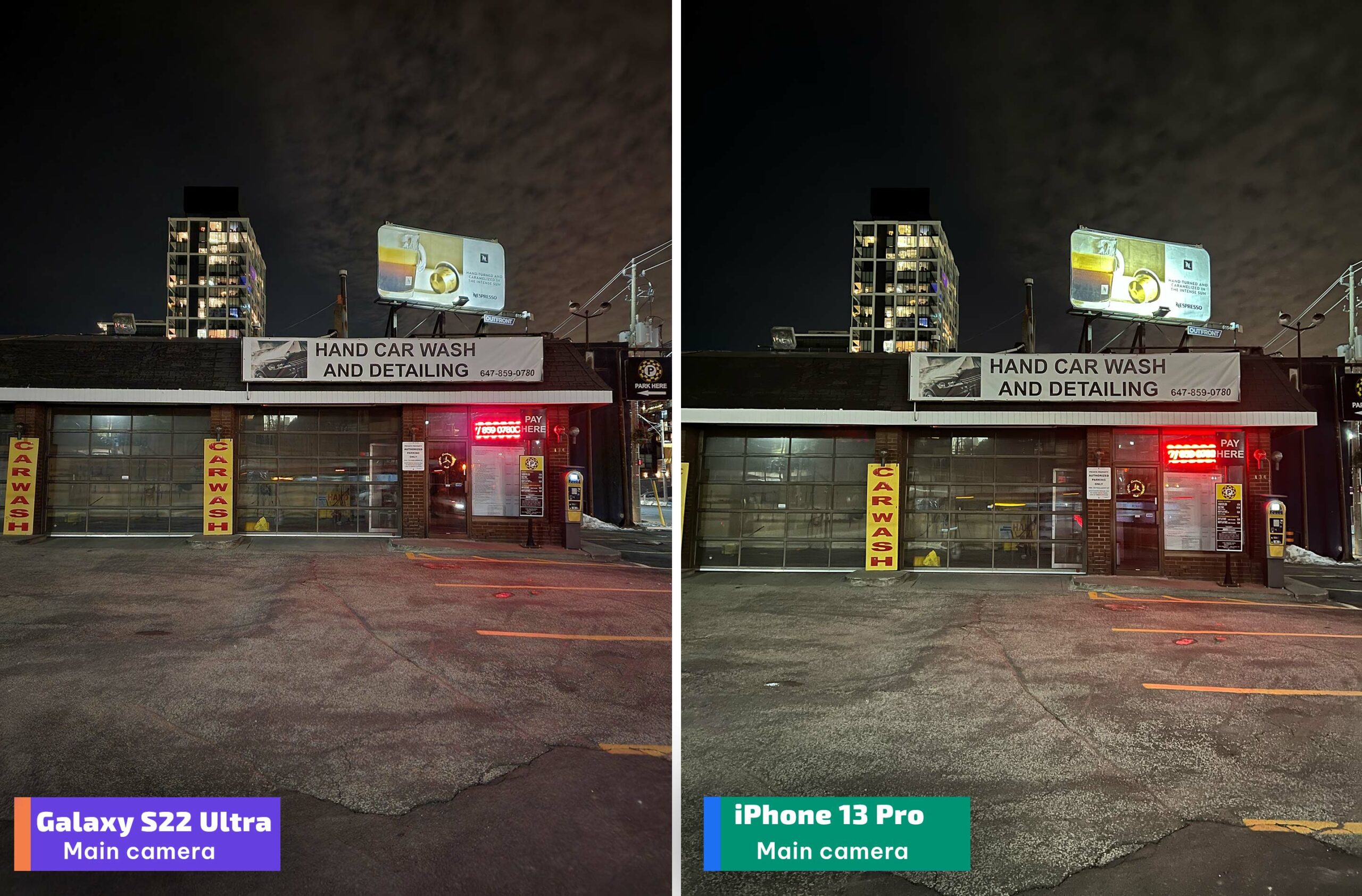 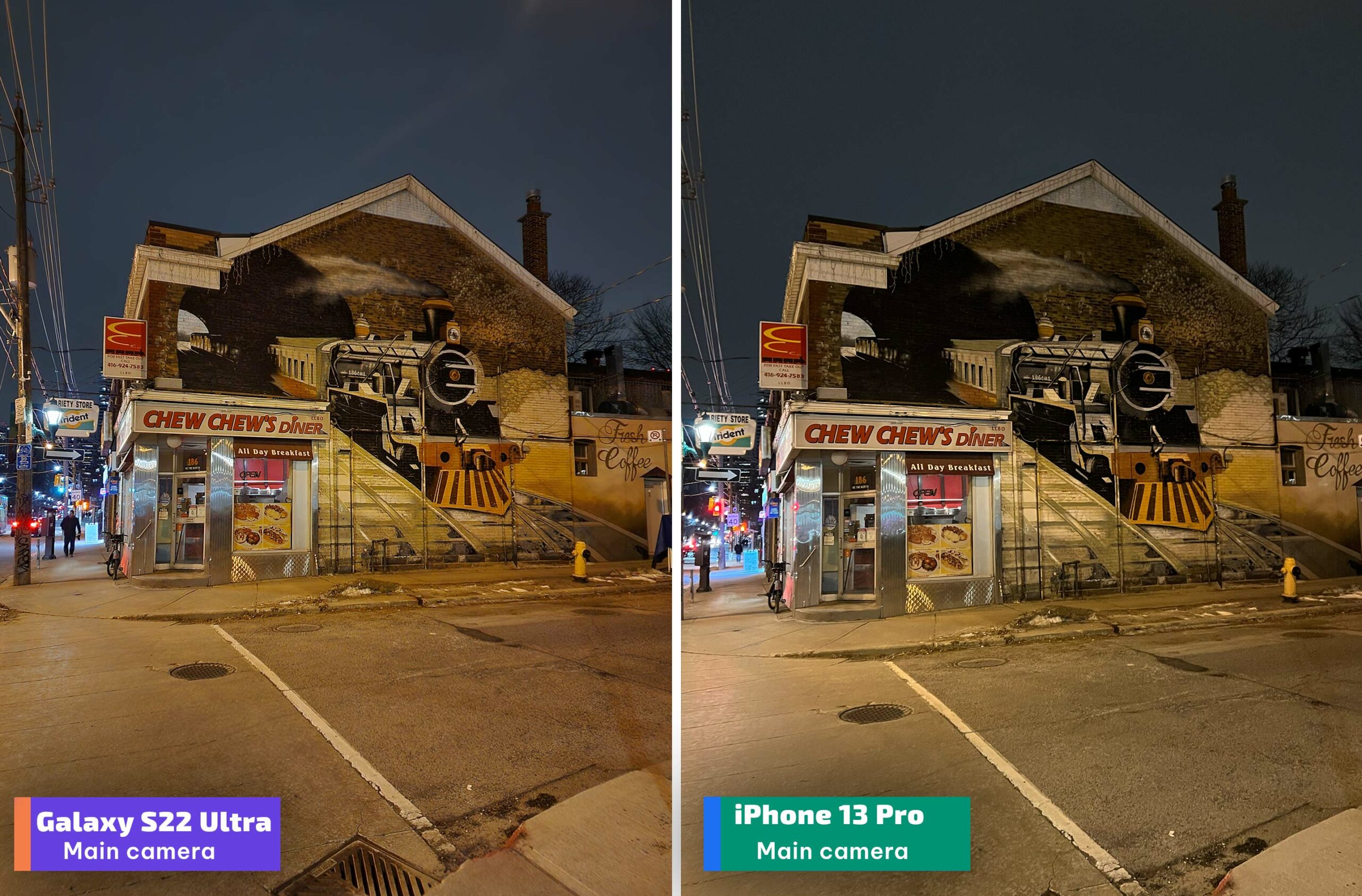 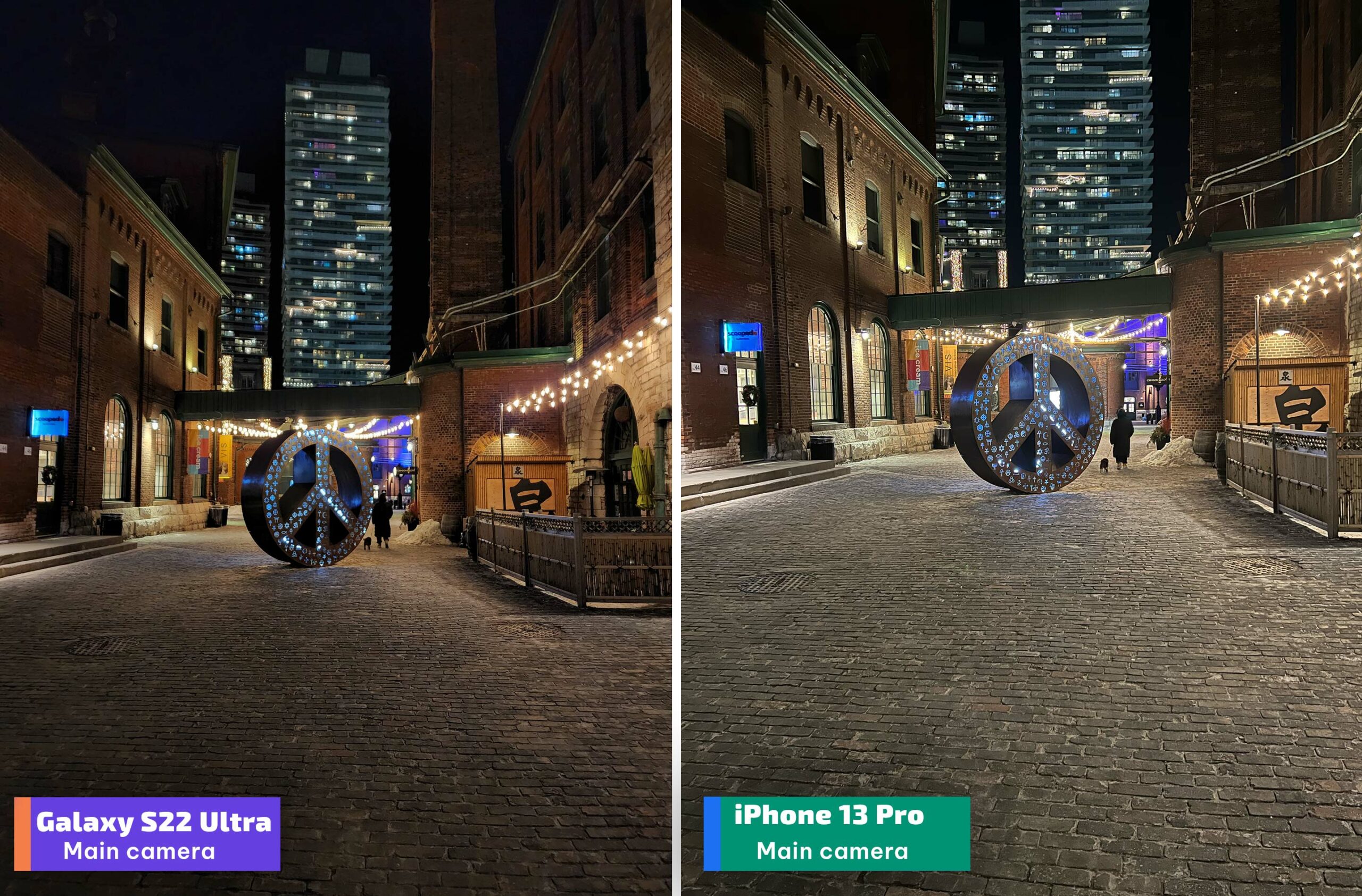 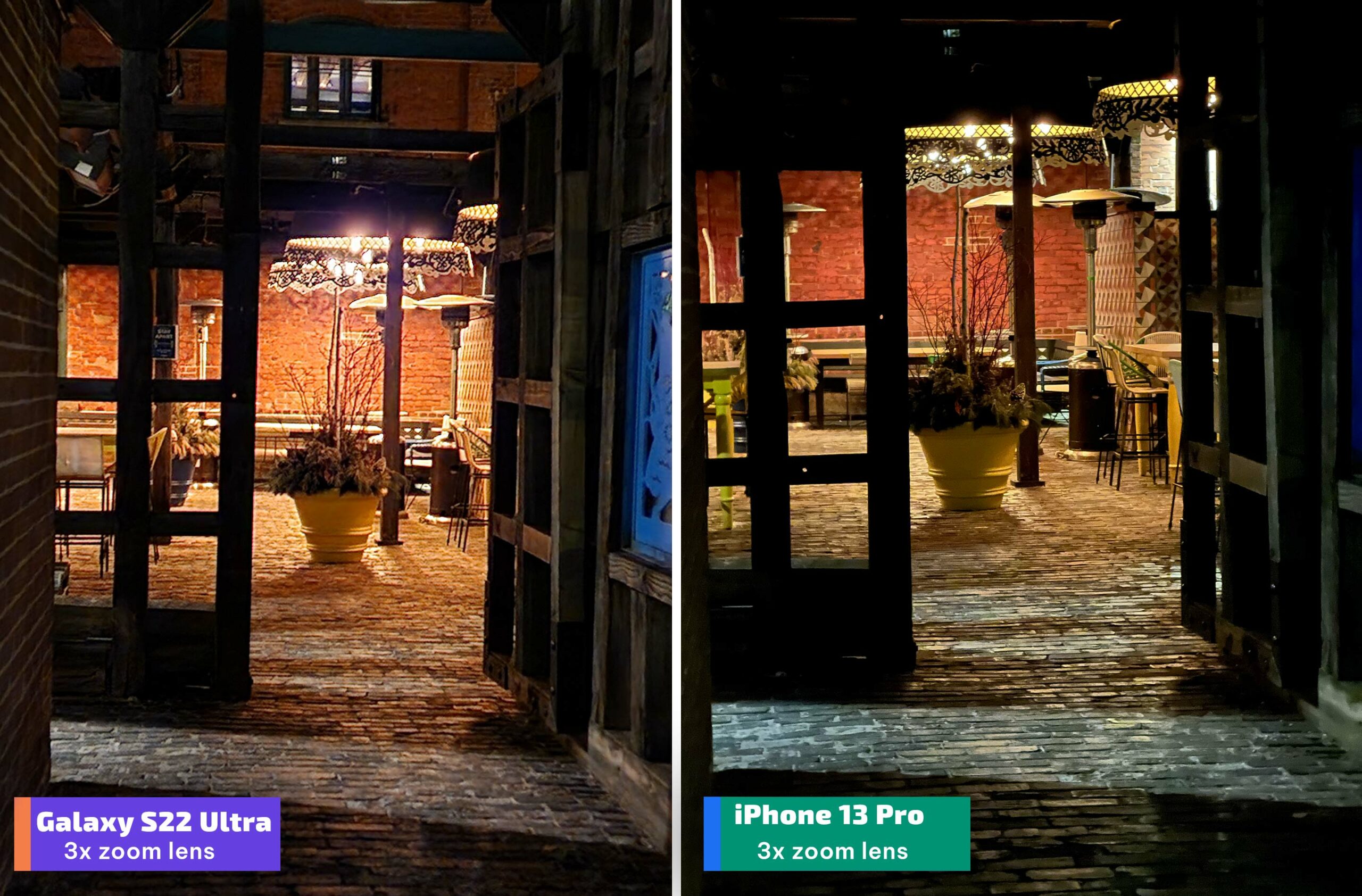 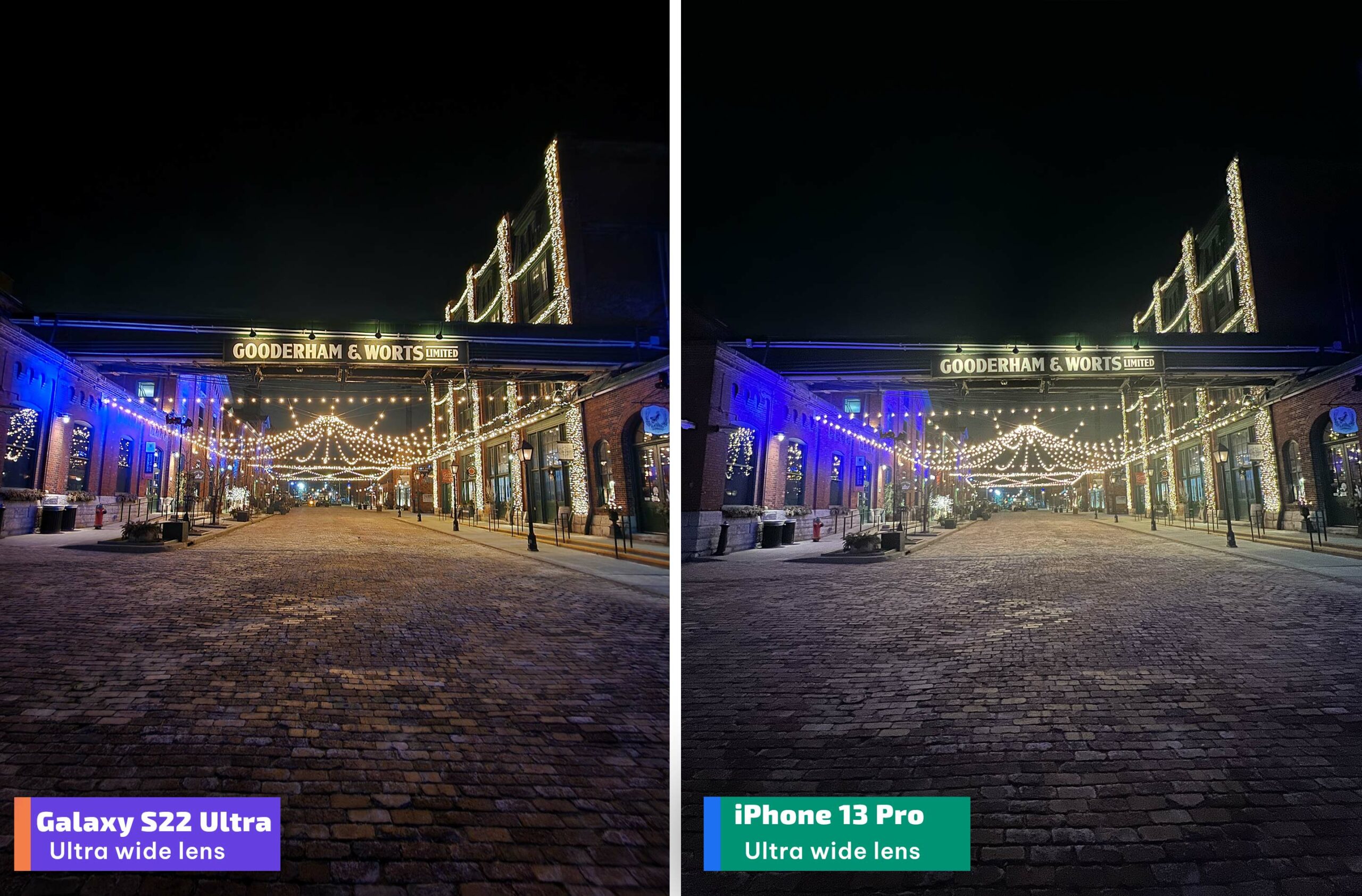