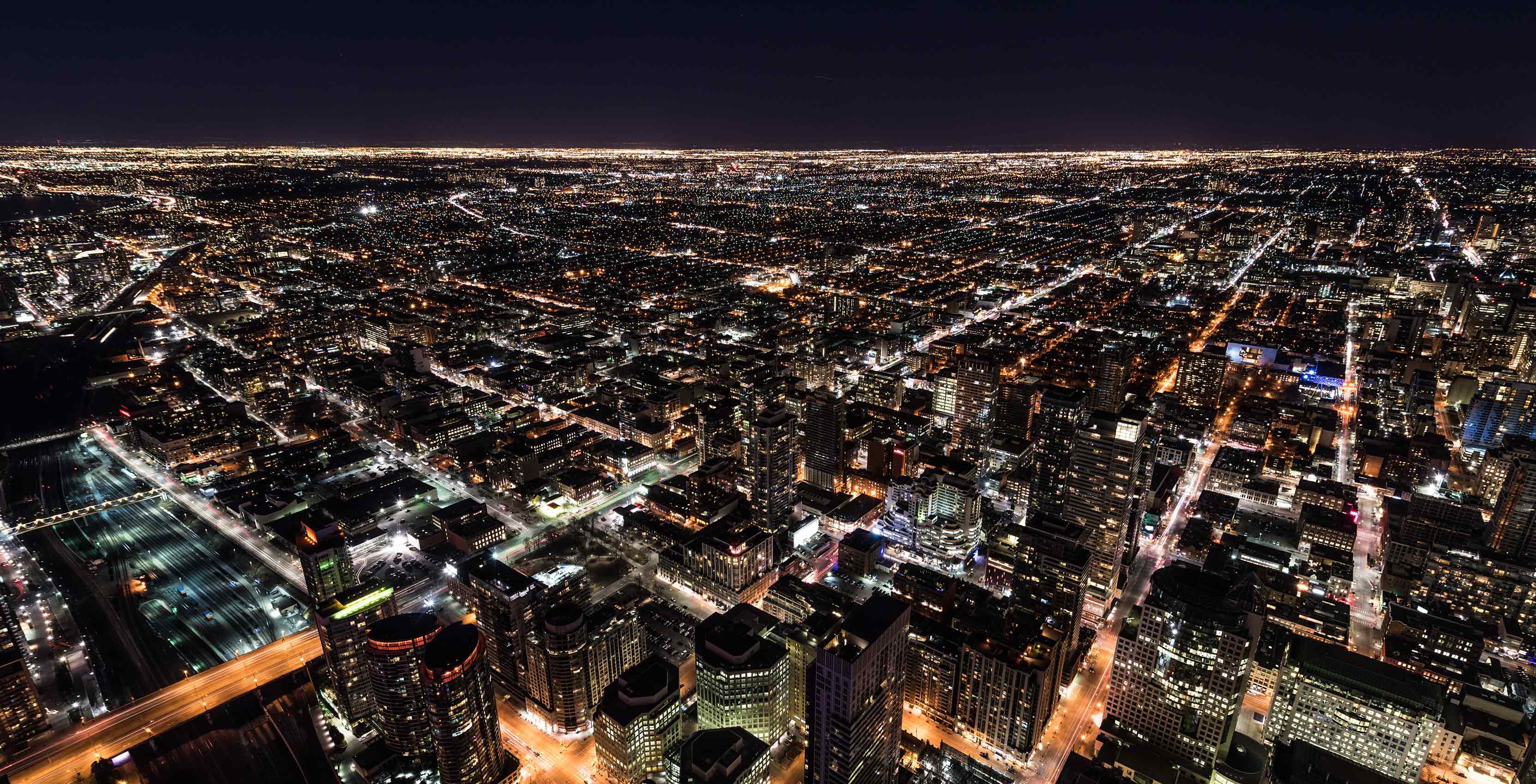 The fifth generation of wireless networks will usher in a new era of connectivity.

Perhaps most importantly, though, increased network affordability and flexibility, along with battery life optimization, will allow for inanimate things to connect with one another like never before.

While you may be more familiar with the rapid in-roads Jetsons-like robots have made into your home (from Amazon Alexa to smart lights), this is also happening on a larger scale with cities.

But the evolution of cities won’t be sudden and obvious, it’ll show itself in all of the little things that gradually make life and work easier for citizens and municipality workers alike. 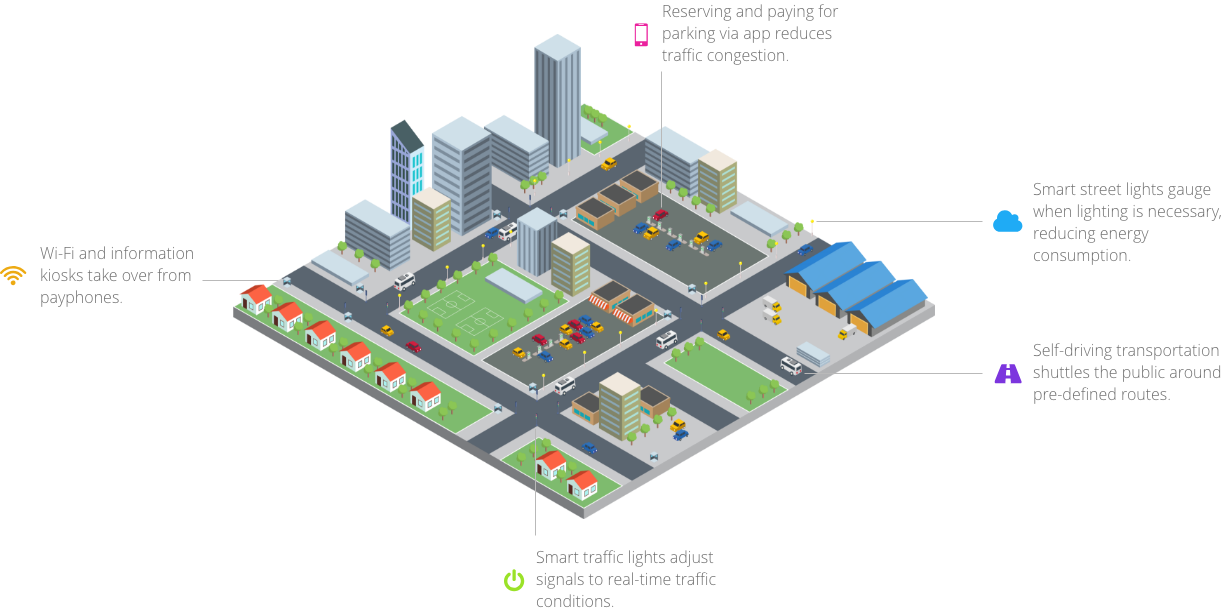 For instance, wireless technology might make a city smarter by letting you track your garbage truck from the convenience of your phone — so you can see whether it’s worth it to make a last-minute dash to your curb.

You could see the benefit through reduced amounts of road work — for instance, Bell says it’s testing a sonar solution that tracks whether underground water pipes are leaking. Leaky pipes lead to unexpected bursts and often require construction work, but by using sonar to monitor the situation and pinpoint leaks, the whole headache can be avoided.

In some cases, the smart city technology you’ll see might be a little more obvious, like phone booths replaced with Wi-Fi kiosks (a concept that’s cropping up in smart city projects across the world).

In still others, the futurism might be extreme; Google’s Sidewalk Toronto project conceives of a next-generation city neighbourhood where the streets can be thinner and parking pre-programmed due to the sole use of autonomous cars and shuttles.

While most of those innovations are still just in the wish-list phase for many Canadian municipalities, several of the mentioned technologies are already rolling out through trials or early deployments in partnership with tech companies, carriers and post-secondary institutions.

The federal government is also taking a strong interest in developing Canadian smart cities. It launched the Smart Cities Challenge in November 2017, offering prizes of up to $50 million to communities that come up with innovative connected and data-based solutions to their most pressing problems. 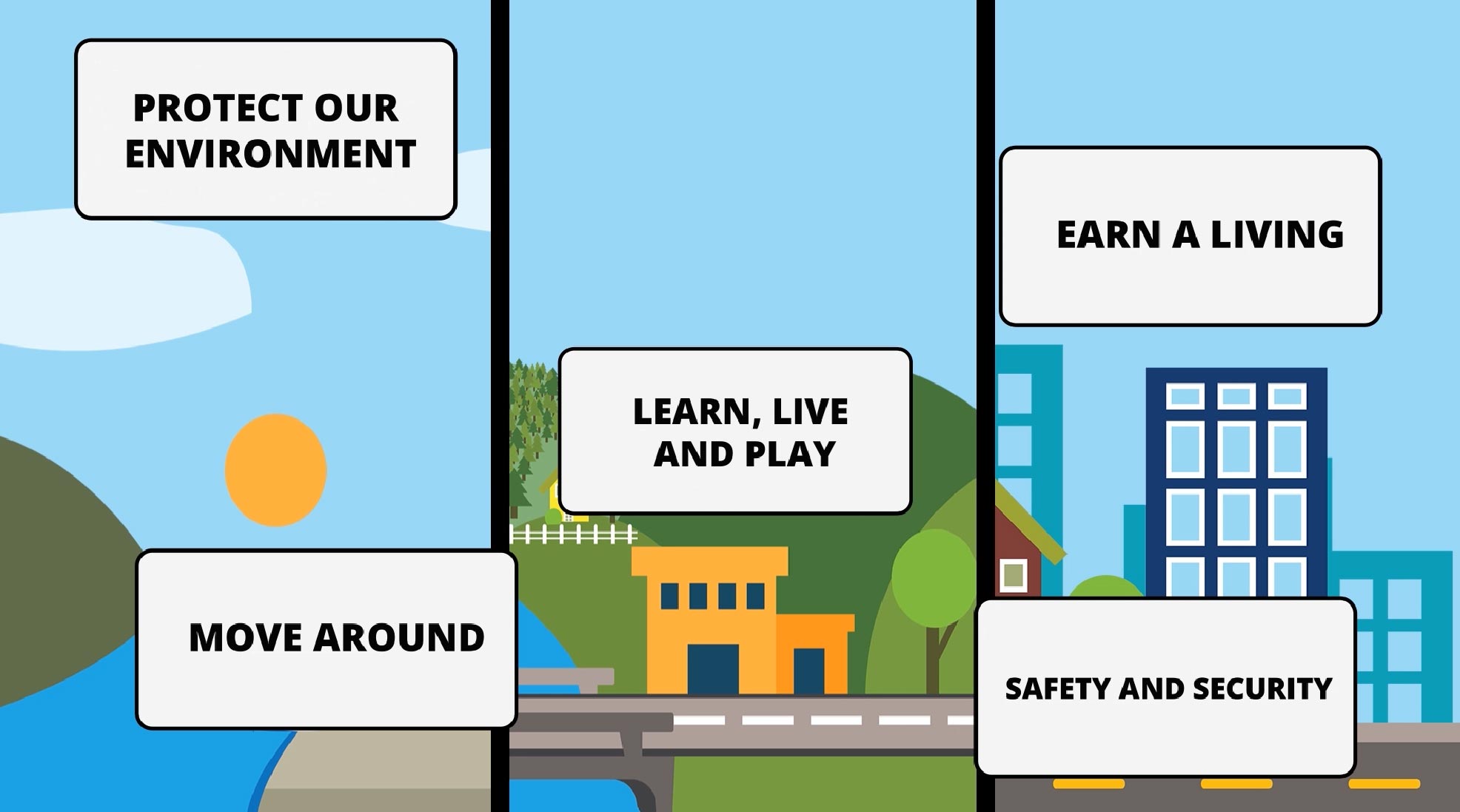 Above: a screenshot from the federal government’s explainer video on the Smart City Challenge.

Applications close in late April and municipalities across Canada are eagerly compiling proposals in the hopes of making their cities cleaner, safer, friendlier and more eco-friendly through smart technology.

Winners will be announced in spring 2019, not long after the first planned 5G deployments and wide-scale trials begin to roll out.

The timing is important, since 5G provides the essential prerequisites for smart cities.

Low latencies and high data speeds enable things like remote drone flight and autonomous vehicles, which will not only enhance modern cities but change the way they operate on a structural level.

But while those flashier technologies get much of the attention, hard-working but low-energy smart city water pressure or GPS sensors get their own dedicated space in the network.

A technique called ‘network slicing’ allows operators to segment the network to make sure different types of technologies are reliably served the connection they need, so that, for instance, priority speeds go to the mid-air drone over a smart meter on the side of a house.

However, that smart meter will still be given a reliable, low-energy connection.

Below, find a few of the smart city projects already at work in Canada.

Following in the footsteps of smart city initiatives like Sidewalk Labs New York, Bell and the City of Kingston, Ontario, are collaborating to roll-out digital kiosks that offer Wi-Fi connectivity, maps, tourism information and emergency contact services. As payphones slowly go extinct, these sorts of kiosks will likely take their place. 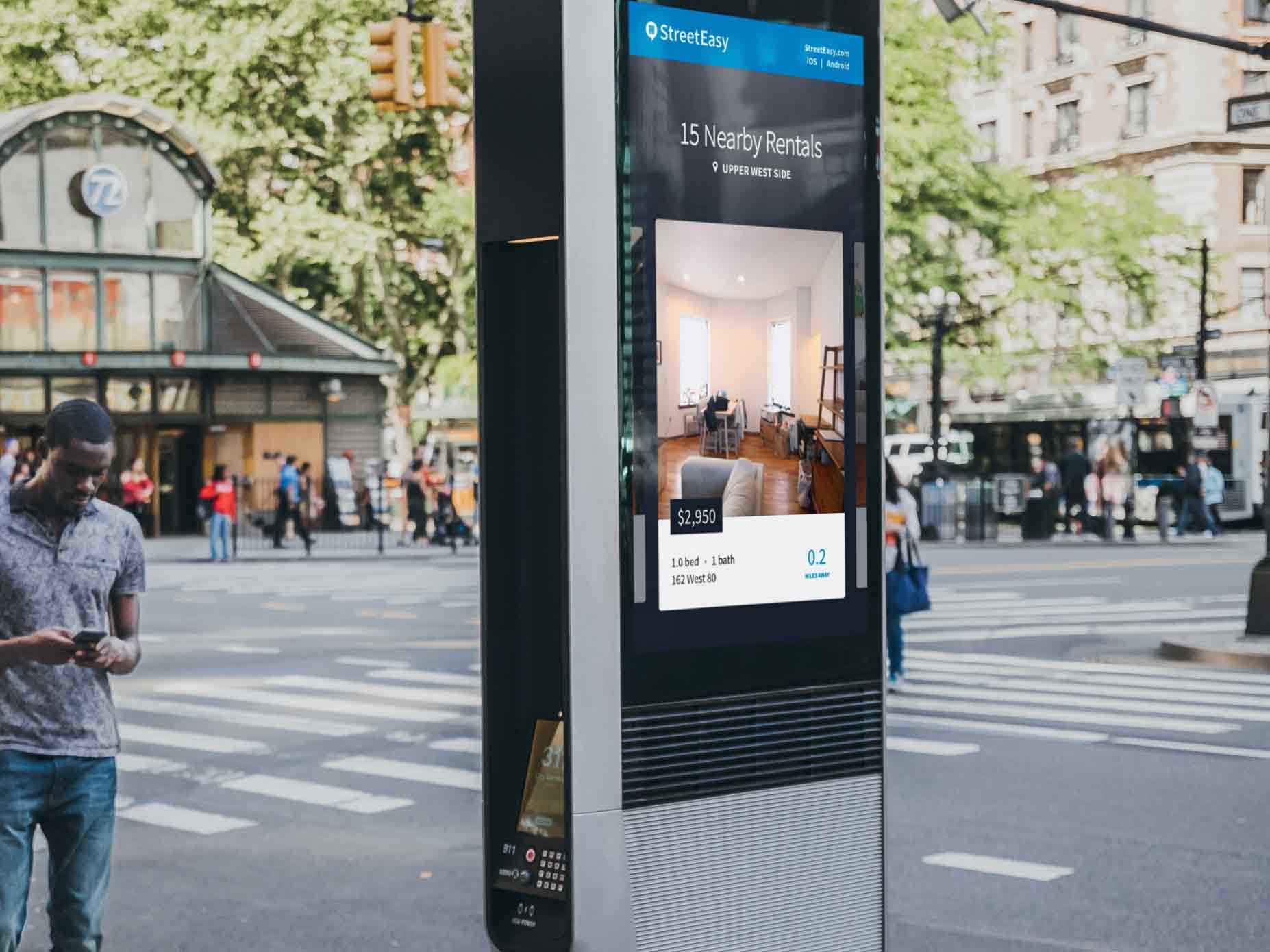 LinkNYC Wi-Fi kiosk in NYC by Intersection, of which Sidewalk Labs is a minority investor.

Naturally, there are other ways to provide public Wi-Fi too. In Montreal’s Innovation Quarter, an ‘urban experimental laboratory,’ Wi-Fi hotspots have been set up on streetlights. The Innovation Quarter is supported by the municipal, provincial and federal government as well as colleges and corporate partners including Videotron and Ericsson.

Both Bell and Telus are pursuing smart lighting in their smart city projects with various municipalities. Smart lighting uses sensors to use variables like motion or the time of day to dictate whether lighting is needed and turn off city lights when illumination is not required.

In this same way, sensors can also be used to save power in municipal buildings and facilities.

In yet another project that helps the environment, Rogers participated in the City of Ottawa’s Innovation Pilot Program with a connected water solution. The solution helped municipal and environmental workers monitor bodies of water for pollution, identify temperatures that were too extreme, among other parameters.

As mentioned above, Bell is working on a connected water solution that monitors underground water pipes using sonar so that leaks can be detected early, reducing construction on city streets.

The City of Toronto has a few smart city initiatives underway, including a partnership with Waze to help motorists navigate and a smart traffic signal pilot program that is testing technology to adjust signals to real-time traffic conditions. 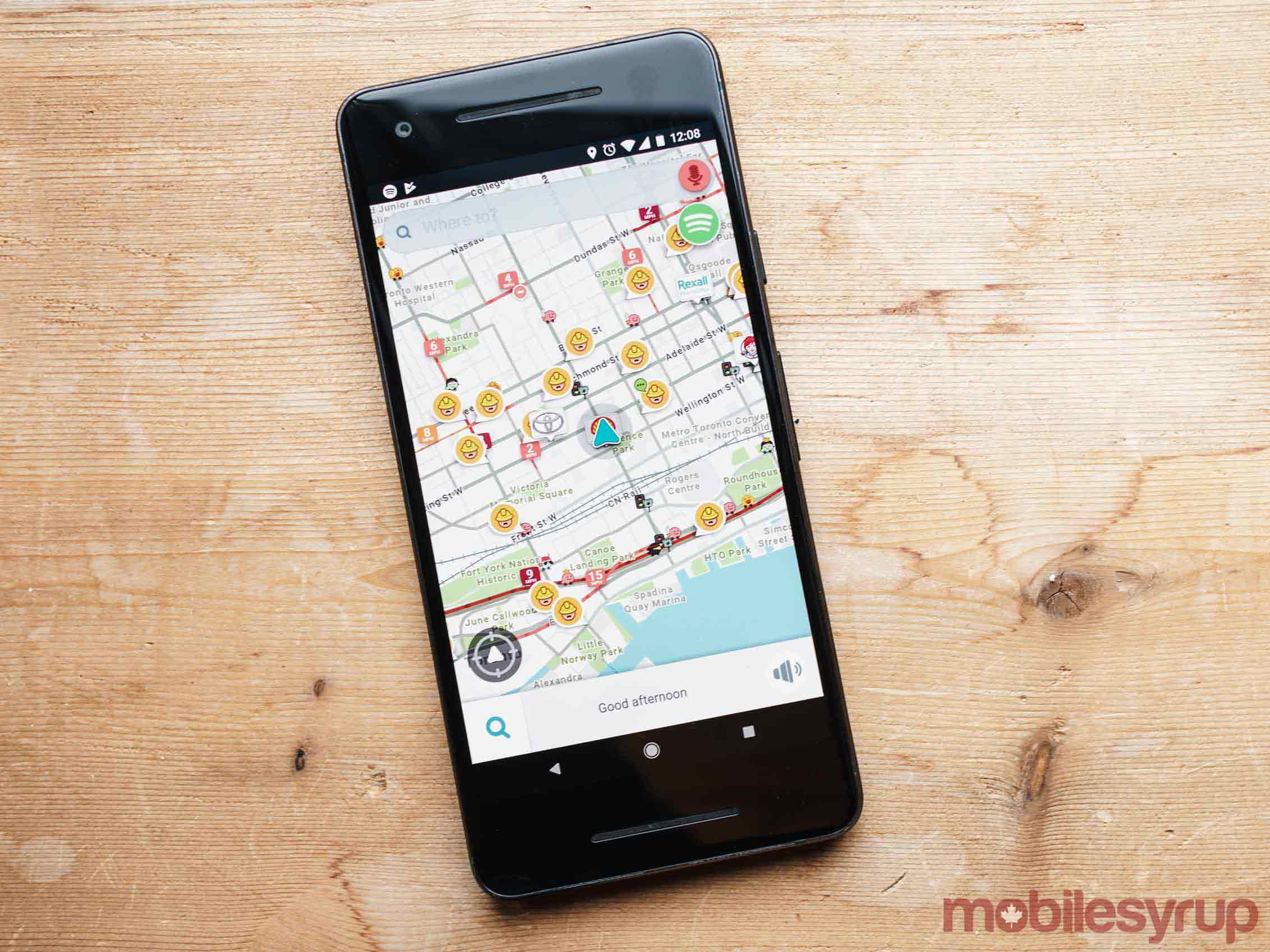 Cities have a surprisingly large fleet of vehicles. From police cars to garbage trucks, Bell tells MobileSyrup it is exploring using wireless connectivity to provide real-time updates on where vehicles and where they’re going allows for better management.

Better management, in turn, translates to a more streamlined, efficient fleet, which has environmental and economic benefits. Letting citizens tap into information about the whereabouts of certain vehicles, like garbage trucks, adds another layer of benefit.

Parking is a major pain point for the citizens of any crowded city, and smart cities will aim to provide an answer. Most projects are focusing on using sensors to provide real-time information on what parking spaces are already full through an app, as well as providing the ability to pay, and maybe book, via app. Toronto Parking Authority, also known as Green P, now offers the ability to pay, track and extend parking through a mobile app.

Do you have ideas on how to change city life for the better using wireless connectivity? Let us know in the comments.