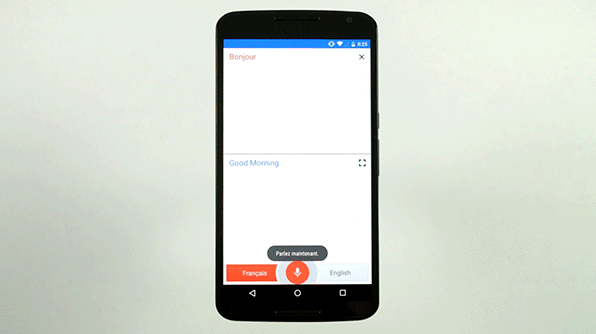 Google is announcing a new update to Translate today that brings real-time sign and document translation to iOS and Android users. The update comes after rumours emerged recently of such a move.

The technology has been implemented from Google’s purchase of Word Lens last year, an app that interpreted real-world objects and translated the text within them without distorting the context. I used Word Lens all the time, with inconsistent effectiveness, when travelling in Germany in 2013. Google says that the technology has been improved significantly since then, so we’re looking forward to trying it.

The company is also pushing a new feature: real-time conversations. While that’s not entirely true — the ability to converse in real-time has been available on Android for some time — this is the first time iOS users have access to the technology, and Google promises that it will perform on Android significantly faster than before.

It works by entering into ‘Conversation Mode’, which allows two users to talk into a smartphone and have the app translate back and forth.

This update is rolling out to users over the next few days, and just in time for Mobile World Congress in Barcelona.