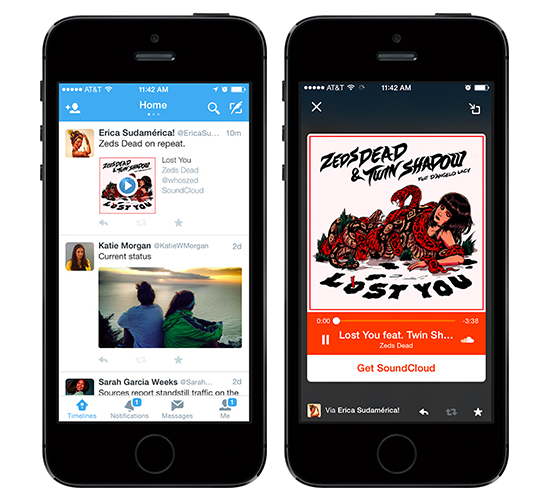 Twitter for mobile just got louder. The mico-blogging site this week announced a new Audio Card feature for iOS and Android users that allows for the streaming of music or audio tracks directly from the Twitter apps.

This new tool will allow you to listen to audio from your favourite artists on Twitter without leaving the Twitter application. An embedded player will play the linked piece of audio while you continue to browse your Twitter feed. You just tap on the link to bring up the Audio Card, and then minimize or swipe it away by pushing the Card to the bottom of your screen.

Twitter says it plans to partner with multiple third-party streaming services, but for now Audio Cards only works with one: SoundCloud. This SoundCloud collaboration includes more than 50 SoundCloud “partners” (Twitter users) that are able to add Audio Cards to their tweets. Expect to see podcasts, music, and other types of audio content from The White House, NPR, NASA, and Glen Beck, as well as Neil deGrasse Tyson, Deadmau5, Olly Murs, Coldplay, and David Guetta.