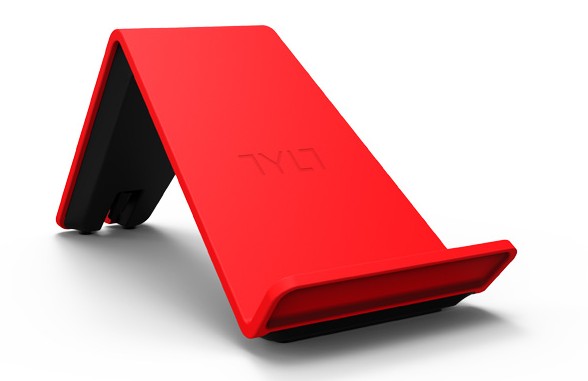 A company called Tylt came out of nowhere at CES 2013 and rocks our socks with some incredible-looking phone accessories. One in particular caught our eye, and the eyes of many press members, thanks to its thoughtful design and its ability to solve two problems at once.

The Tylt Vu is both a Qi-compatible inductive charger and a phone stand. It is able to charge any device that has built-in wireless charging, such as the Nexus 4 or Lumia 920, and also stands your phone in both lanscape and portrait mode at an angle perfect for media consumption and reference. The Vu can output 1A at 19V, which is plenty for most current smartphones.

It will hit the market in April for $69.99, which may seem steep but that’s the price that most wireless charging hubs go for, so it seems fairly reasonable.

The company has a ton of other great products, too, including an awesome 10,400 mAh-compatible Energi Backpack, which is currently raising money on ChristieStreet for a production run.

The Vu will come in four colours — red, black, blue and yellow — and will have a one-year warranty. Considering the Nexus 4 charging orb may never hit the Canadian market, this may be your next best bet.