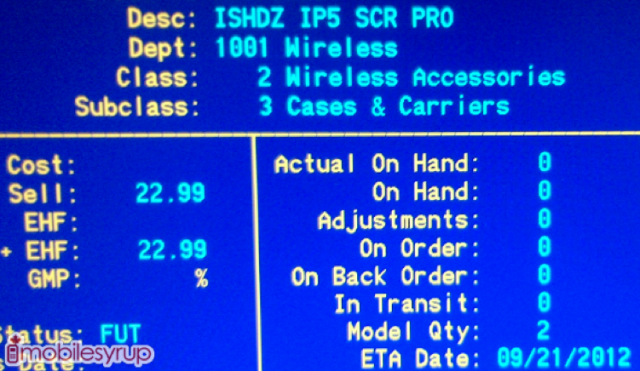 Apple has officially scheduled a media event of September 12th – this is when we’ll probably see the next-generation iPhone. The invite showed a massive number 12, which indicates the date, plus a shadow of the number 5, potentially revealing that it’ll be called the “iPhone 5.”

When Tim Cook, Apple’s CEO, takes the stage he’ll probably declare that the new iPhone will be available for sale on September 21st – this is still a rumoured date. A screenshot we received from a retailers inventory system shows accessory maker iShieldz coming out with a iPhone 5 screen protector on the 21st. The docs says “ISHDZ IP5 SCR PRO” for $22.99 with the ETA of September 21st.

Taking a note from the Apple media invitation: “It’s almost here.”
(Thanks tipster!)