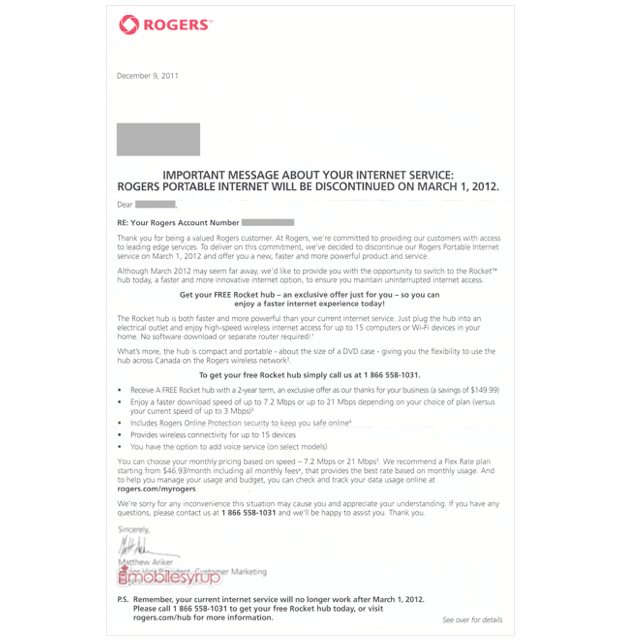 Inukshuk Wireless is a joint venture formed in 2005 by Bell and Rogers that brought pre-Wimax high-speed fixed wireless service to those located in remote areas of Canada. Bell and Rogers independently sell various internet products and the roll out has been slow, but certainly needed. Apparently Rogers customers who have signed up for the Portable Internet service have been informed that the service will be discontinued effective March 1st, 2012 – with the only option to switch to Rogers “4G” HSPA+ device, such as a Rocket Hub or internet stick.

A letter we obtained doesn’t give any details of why it’s being cut, but offers a deal to those customers of a free Rocket Hub (they’ll have to sign up for a 2-year contract to get it). Customers can also opt to purchase the Hub outright for $400. Several Rogers customers contacted us and stated their current monthly internet rates are between $30 – $60. With this switch the monthly rates for these customers will be more expensive. Rogers says the best route is to go with the “flex plan” that starts at $48.86/mo for 3GB data, then gradually increases to $93.86/mo for the 15GB plan with each additional GB priced at $10.

It’s certainly an interesting move. We’re not sure if Bell is doing the same for their customers, but it could be a sign that the Inukshuk network is coming to an end, mainly to focus on the deployment of LTE (Long Term Evolution).

Update: Rogers has sent us a note stating the following:

Pricing will depend on how much data a customer uses and which product they’ve subscribed to. As the letter states, a Flex Rate plan is a good option, however if people are worried about going over their caps, there are larger bucket options. As always, we also offer ways for customers to manage their data use through their MyRogers account to monitor their usage. In the event a customer does accidentally use more data than their plan allows, we will cap the cost of overage at $100 to avoid bill uncertainty.”

The Best Smartphones for Canadians (2012 Edition)