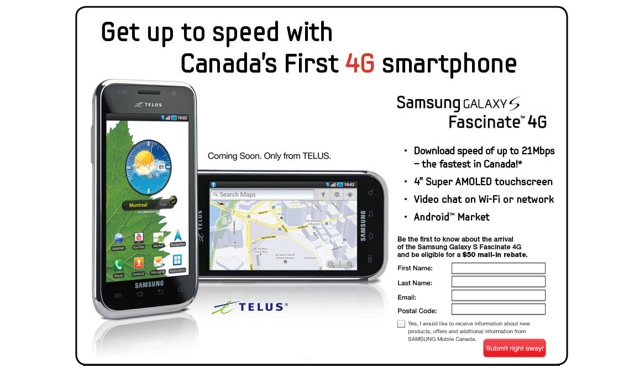 TELUS will be releasing a followup to the the Samsung Galaxy S Fascinate 3G with the Galaxy S Fascinate 4G this month. You can check out a quick video of the Fascinate 4G here but the major difference between devices is that the 4G version is “Canada’s first 4G phone” as it can potentially reach peak download speeds of 21 Mbps (while the original could only clock in at 7.2 Mbps). Another slight change is the chrome bezel around the device and that the back cover now is a “gun metal” finish rather than a glossy black.

Other notable specs have this Android coming with OS 2.2 (but are plans to be upgraded to 2.3), 4-inch Super AMOLED display,a 1GHz processor, Wi-Fi and the ability to create a Wi-Fi hotspot, 5 megapixel camera that records 720p HD videos, VGA front-facing camera for video calling and a 1650mAh battery.

TELUS and Samsung stated at the beginning of March that the Fascinate 4G will be available within 30-60 days. Then Future Shop put this as “coming soon” in their Cell Shop magazine… and now there is a sign-up page on the Samsung Canada site for those who want to keep updated on when the device will become available. What’s even better is that they state “Be the first to know about hte arrival of the Samsung Galaxy S Fascinate 4G and be eligible for a $50 mail-in rebate”.