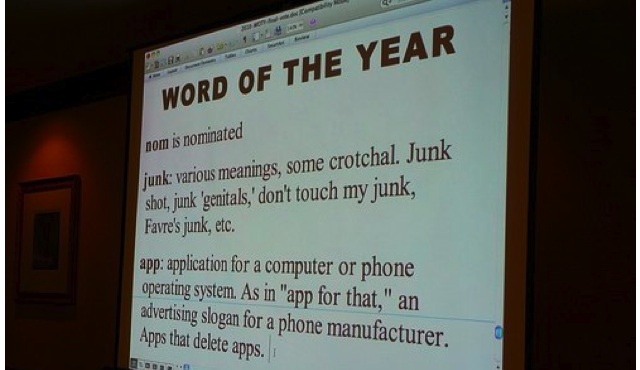 The American Dialect Society recently declared “Word of the Year” for 2010 was one that every mobile manufacturer jumped on, feuded over and have made tons of cash off of. The word is “app” and the ADS gives the official meaning as an “application program for a computer or phone operating system”.

Ben Zimmer, chair of the New Words Committee of the ADS said “App has been around for ages, but with millions of dollars of marketing muscle behind the slogan ‘There’s an app for that,’ plus the arrival of ‘app stores’ for a wide spectrum of operating systems for phones and computers, app really exploded in the last 12 months… One of the most convincing arguments from the voting floor was from a woman who said that even her grandmother had heard of it.”

App is becoming part of our daily speech and the tipping point for winning the word of the year was a grandmother who “had heard of it”. The runner up words were “nom”, “junk”, “Wikileaks” and “trend”.