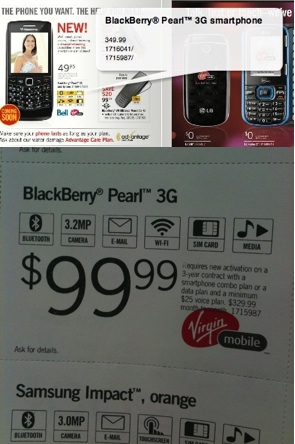 The last carriers to release the 9100 is Bell and Virgin (and possibly WIND). Most likely because they are waiting on the Black model which will apparently be available in a the coming weeks. We knew that Virgin posted this as “coming soon” on their site for $49.99, and according to the internal document we received it shows Bell will release this for $29.99 on a 3-year and $349.99 no contract.

If you’re looking to get this on either Bell or Virgin here’s a bit of confusing news regarding pricing. Bell owns the retail chain The Source. In their flyer they show the 9100 as “coming soon” priced the Virgin and Bell Pearl 9100 for $49.99 3/yr and $349.99 no contract. Plus we received a price tag that shows the Virgin Pearl 9100 to be available for a whopping $99.99 on a 3-year.